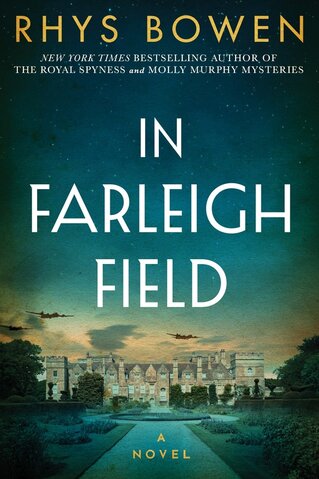 “You know The Earl of Westerham.”

“Yes. I’m told you’re quite pally with him. Is that correct?”

“I wouldn’t say pally, sir. I wouldn’t presume to claim friendship, but he knows me quite well. My father is the vicar of All Saints, Elmsleigh, the village next to Farleigh. I grew up playing with Lord Westerham’s daughters.”

“Playing with Lord Westerham’s daughters,” Max Knight repeated with the hint of a smile.

Ben’s face betrayed no emotion.  “May I ask what this is about, sir? Has my background anything to do with the quality of my work here?”

“Absolutely, at this moment. You see, we need insights, young man. An insider.”

Ben looked up frowning. “Insights into what?”

Max Knight’s clear blue eyes still held Ben’s. “Three nights ago now a man apparently fell from a plane onto one of Lord Westerham’s fields. His parachute didn’t open.  He was pretty much a mess, as you can imagine. Face too damaged to get an idea what he looked like. But he was wearing the uniform of the Royal West Kents.”

“They’ve taken over most of Farleigh, haven’t they?” Ben frowned. “But they’re an infantry regiment. Where did the parachute come in?”

“It didn’t. Their commander says that his chappies don’t leap out of planes and are all present and accounted for. The identity disk belonged to a soldier who was killed at Dunkirk, AND it turns out that the cap badge was the one the regiment wore in the Great War. ”

“So a possible spy then?”  Ben felt his pulse quicken.

“Quite possible. I’m also told by one of our bright young women who was going through his clothing—not an enviable task, as you can well imagine—that his socks were wrong.”

“Yes, she’s something of a knitter and she says that the heel isn’t turned like that in British army regulation socks. On further investigation she could just make out the number 42 on them.”

“Oh, I see.” Ben nodded now. “So the socks came from the Continent.”

“I’m glad we use Oxford lads. So quick on the uptake,” Max Knight said.  Ben flushed.

“So I suppose the question is what he was doing in Lord Westerham’s field,” Max Knight continued. “Was he there on purpose or by accident?”

“Was there a high wind that night? He could have been blown off course or the parachute malfunction might have caused him to drift.”

“We’ve checked on that. The breeze was only two knots. Besides, you don’t drift if your parachute doesn’t deploy properly. You plunge straight down.”

“It might just have been pure coincidence that the landing site was Lord Westerham’s field,” Ben said. “He was instructed to parachute down within reach of London, or within reach of Biggin Hill RAF station.”

“Then why not an RAF uniform instead of the West Kent Regiment?” He took a deep breath that sounded almost like a sigh. “You can see the tricky situation we find ourselves in, can’t you, Cresswell?  If the landing was intentional, if he was a German spy—and we have to assume that is the case—then he was sent to make contact with someone nearby—in an area where a uniform of the West Kents would not arouse suspicion.”

“What about his pockets, sir?” Ben asked. “Was there nothing useful that could be retrieved from his pockets?”

“His pockets were completely empty, apart from a small snapshot in his breast pocket.”

“A snapshot?’ Ben asked, half interested and half afraid now.

“Of a landscape. Of course it was covered in blood but the lab has been able to clean it up.  We had to prise this out of the hands of army intelligence, by the way. They weren’t too keen to share information. Nobody is these days.” He opened a drawer and took out a slim file, which he opened and turned toward Ben. Ben stood up and came across to the desk to look at it. It hadn’t been a very good photograph to begin with. The sort small snapshot a tourist might take on summer holiday and now after having been bloodied and cleaned it was even more indistinct. From what Ben could make out it was a general view of English countryside with fields divided by hedges and rising in the background a steep sided hill, topped with a crown of trees. Amid the trees was just the hint of a village with what looked like a square tower of a church poking above Scotch pines. Ben stared at it. “That’s not anywhere I’ve seen and it doesn’t look like our part of Kent,” he said. “It looks more bleak and windswept. Scots Pines, aren’t they? More like the West Country from that square towered church. Cornwall maybe?”

“Or the name of the village is somehow significant?” Ben suggested.

Knight sighed again. “Again possibly. You’ll note there were numbers written on it. Almost washed away but the pen left an impression on the photo paper.” He looked up at Ben. “It’s all right to pick it up.”

Ben took the photograph gingerly and held it up to the light. 1461.  “Fourteen sixty one. Any significant battles take place on that date?”

Knight looked at him long and hard. “That’s for you to find out, son. I’m dumping this in your lap. Reports on you say that you are quick and you’re keen and you don’t like sitting around twiddling your thumbs. Normally I’d give something like this to a senior man but you have what nobody else in this department has—you’re one of them.”
Rhys Bowen is the New York Times bestselling author of the Royal Spyness Series, Molly Murphy Mysteries and Constable Evans. She has won the Agatha Best Novel Award and has been nominated for the Edgar Best Novel. Rhys’s titles have received rave reviews around the globe. In Farleigh Field is her first big stand-alone thriller.