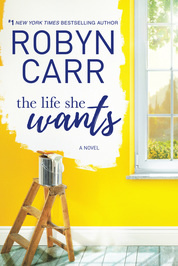 Riley’s clothes weren’t baggy and worn anymore, Emma thought. In fact, she looked wonderful. She was obviously buying her clothes in San Francisco. That was a Marco de Vincenzo suit, a little young and short for Riley, but she wore it well. If Emma was a betting woman she’d think Riley pulled that one out of the plastic just for her.

She finished filling out her forms and went back into Riley’s office, giving a courtesy knock before opening the door. Riley was on the phone but gestured her in, pointing to the chair. While she waited, the secretary peeked in. She was wearing her coat and had her purse strap over her shoulder, obviously leaving. She gave Riley a wave and Riley waved back.

Now it was just the two of them.

Riley finished her phone call and focused on Emma. “Any questions?”

“Not that I can think of. Thank you again.”

“Not at all,” Riley said in a business-like manner. “See you on your start date. On time.”

“Absolutely.” She rose to go.

Emma was almost out the door.

“Now we’re even,” Riley said without looking at her. “I have no more debt to pay to you.”

“We’re not anymore,” Riley said. “We’re not going to be friends but this thing between us… I’m done with it. But stay away from my brother.”

And she was completely refocused on her computer screen.

Emma slowly closed the door behind her. But then she opened it again. “Wait a minute,” she said. “Are you angry with me? Because I said some awful things to you and I regret it, but I think you have to bear responsibility for what you did.”

“Obviously not!” Emma shot back, rather more hotly than she intended.

“It was all regrettable,” Riley said. “And I’m sure there’s plenty of blame to go around.”

“It might be helpful if I knew exactly what blame I’m expected to carry,” Emma said.

“I’d rather it be over,” Riley said, standing to face Emma. “Let’s call it done.”

“Oh no you don’t – you started this up again. Riley, I didn’t sleep with your boyfriend behind your back! What is your grudge? Because of those terrible things I said to you out of anger? If that’s it—”

“That’s not it,” she insisted loudly. “I guess you were entitled. I understood why you’d be furious.”

“You wouldn’t forgive me!” she said. Riley’s eyes glistened and she held her lips in a tight line.

Emma was struck silent. She said the only thing that came to mind. “I was too hurt. Too angry.”

“Over Jock?” Riley demanded. She gave a short laugh. “You hadn’t even returned our calls in weeks! It’s so hard to believe your broken heart was serious enough to sustain such a grudge. We were best friends for ten years!”

She shook her head. “I got over Jock in a few months. I let it go so long ago,” Emma said.

“And it never once occurred to you to send a note or even a text saying let bygones be bygones?”

“Riley, I… No, it never did. I figured we were best parting ways. That was one helluva fight.”

“Yes,” Riley said softly. “And I begged. I groveled. I sent a dozen notes, left messages. You wouldn’t respond. You wouldn’t even hear my side of the story. And you lifted your nose in the air and walked away to a better life, better friends.”

Emma shook her head. “Not for long,” she said. “Is that really what’s up your butt? That I didn’t say you’re forgiven? Didn’t listen to your story? Want to tell me now?”

“Hah! Now I don’t even want to think about it, but it sure as hell had staying power!”

Emma laughed hollowly. “We should’ve both been furious with Jock, not each other!”

“I was. I still am some days, but he’s Maddie’s father and I’m stuck with him. You I’m not stuck with.”

“No, you’re not. I don’t need your charity. Well, I do, but I wouldn’t take it if I were starving. But are you still giving me a job?” Emma asked.

“Yes, and by God you better not fuck up. I built this company and it means a lot to me. You mess up and I’ll fire you in a New York minute.”

“I’ll do my job,” she said, turning to go. She turned back. “Really, I might not have said anything, I was a little busy, but I forgave you a long time ago.”