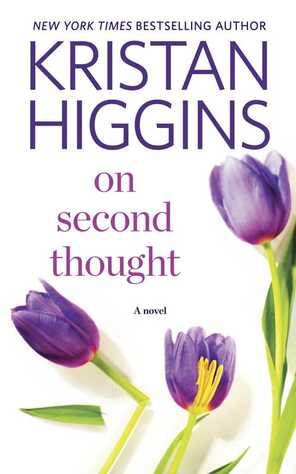 Nathan never told me much about Madeleine; it was one of the few subjects he was touchy about. It hadn’t been easy, I knew. They’d been married for six years. She’d had a difficult upbringing and was, in his words, brilliant. She worked in…in something cool. I couldn’t remember. Otherwise, I knew nothing.

“Thank you for coming,” I said to the next tie.

“I’m very sorry,” said the man, and I was so tired, I didn’t bother asking how he knew Nathan.

“At least you didn’t have children,” his wife said, patting my arm, and I felt like stabbing her.

And then in came Madeleine with Brooke.

My husband’s ex-wife was stunning. He hadn’t mentioned that part. So you were married to Jessica Chastain, huh? I thought. Why isn’t she your widow? Doesn’t seem fair that she had you for six years, but I’m the sap who has to stand here. Also, my feet are killing me.

Madeleine was slim in that “Diet? What do you mean by this foreign word?” way. She was a vegan, Nathan had told me; he’d been watching me lay waste to a bacon cheeseburger and seemed quite content with my meat-eating habits. Vegans were difficult, he’d said.

But they did tend to have great figures. Her dress was navy blue, simple but fascinating, too. Chic, smooth haircut, strange, expensive looking gold earrings that twisted and swung.

She saw the casket and froze, her face turning white as chalk.

Then she let loose a wail that made my blood run cold.

She collapsed right there, folding (gracefully) to her knees, and put both fists up to her face. “No!” she sobbed. “Oh, Nathan, no!”

I hadn’t wailed, or collapsed. Was this a point in my column, or a demerit?

A demerit, it seemed. Eloise rushed to her side, helped her up and put her arms around her. “My deah Madeleine,” she said. “Oh, my deah.” They hugged, and finally, it seemed, Eloise cracked. Her face spasmed.

Six years, the lucky bitch. Eloise murmured to her, and Brooke came in for a group hug.

Them, the popular girls in high school. Me, my pantyhose rolling down.

“Where’s the bathroom?” my grandmother asked loudly. “I shouldn’t have had all that Pepsi at lunch.”

“Come with me, Gram-Gram,” Ainsley said.

“Kate.” The ex-wife was in front of me, trembling, pressing her lips together. Should I try to out-grieve her? Should I also wail and collapse?

Then I looked in her eyes, and all my bitchery evaporated.

She had really loved him.

“Hi. I’m…I’m so sorry,” I said, and my mouth wobbled, because I was so sorry, so sorry I hadn’t taken better care of Nathan. She’d kept him alive for six years. I lost him in our first.

“Forgive me for…that,” she whispered, tears spilling out of her beautiful eyes.

“I’m sure he loved you very much.”

“Right back at you.”

Eloise gave me an odd look.

How did he ever get over her? She was flippin’ beautiful. I would marry her, she was so stunning. And why didn’t she want his babies? It would make things a lot better for the Coburns if there was a little Nathan running around this place, let me tell you! She was probably a selfish whore.

Eloise put her arm around her and ushered her away. I wondered if I said that selfish whore bit aloud.

“Thank you for coming,” I said belatedly, my voice sounding cheerful, as if I were waving fondly as best friends left after dinner.

Cause of death: Blunt trauma to the head.

If my sister had gone for wood counters, or soapstone, would Nathan still be alive?

Apparently, he had a tiny little oddity in one of the blood vessels in his brain. Not a problem, unless one’s wife needed a second glass of wine.

Cause of death: Wife wanted to have buzz on during irritating speech by sister’s boyfriend.

Couldn’t Eric just have asked Ainsley to marry him in private, like a normal person, I don’t know, like maybe five years ago? Instead, he had to make a big production in front of everyone, in front of his Wellness Montage (it had been labeled, and really, who the hell photographs the removal of a testicle?). No, we all had to drink a toast to my little sister, and boom, I’m a fucking widow.

I looked at the line, which went out the door, out into the foyer and down the street. When we pulled up to the funeral home, the line of mourners was four people thick and wrapped around the block. So much black it looked like the Knights Watch from Game of Thrones had descended. That was two hours ago, and the line showed no sign of thinning.

Four months and one week ago, I would’ve lost my fiancé, but I still wouldn’t have known the reality of living with him day after day.

One hundred and two days of marriage.