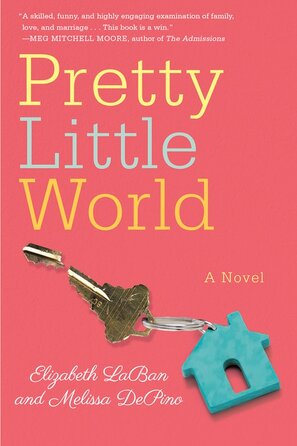 “A commune?” Celia and Hope said together.

“That’s right,” Stephanie said. “A commune or a co-op or a multiple-family dwelling, whatever you want to call it.”

“Please, Stephanie, this is no time for jokes. Our best friends are abandoning us. It’s crisis time,” Hope said.

“Exactly. And a crisis calls for action, right? This,” she said, sweeping her arms along the wall. “Is the ultimate in taking action. The way I see it, Mark wants more space. We all want the company and who doesn’t want extra hands around to pick up the slack with the kids and the housework? I propose taking down this wall, and then taking down the wall between my house and Hope’s. We can leave our upstairs the way they are. We would have one huge living area. Mark could do the plans.”

“Have you been reading your hippie books and listening to the Grateful Dead again?” Hope asked.

“Is something like that even possible?” Hope asked. “I mean, wouldn’t the whole place collapse?”

“Not if you installed the right steel beams. Mark told me himself that he thinks these houses might have been joined at one time because of the missing firewall.”

“Stephanie, I love that you want us to stay so much you would be willing to demolish part of your house, but I think you know as well as I do that there is no way we would go ahead and even think about something like that,” Celia said. “I’m sorry to say this guys, but I can’t imagine anything that would keep us here at this point.”

Later that day word spread that a burglar had broken into Mary’s house. Apparently someone had put a brick into her garden glove and threw it through her back window, climbed in and stole her jewelry and silver. She had lived there alone for 31 years without any problems, and rarely left her house, maybe twice a week, but the person broke in during the short time she was out. Mary’s house was on the other side of the street from Stephanie, Celia and Hope, and backed onto a tiny alley that seemed a little creepy to them.

“I’ve always been grateful that we live on this side of the street,” Hope whispered to Stephanie as they sat on Hope’s stoop watching the repair people go in and out with new locks and windowpanes.

“Me too,” Stephanie whispered back.

The day had gotten away from them, and now all the dads and kids were at Mark and Celia’s—the men watching the Eagles game and the kids casting and directing a Harry Potter play. It was up to Hope and Stephanie to get food for the kids’ lunches tomorrow, and Celia had given Hope her list.

“Come on, if we’re going to go shopping we should get it over with,” Stephanie said, lightly tapping Hope’s thigh as she got up.

They fell into a quiet rhythm as they walked to the small over-priced grocery store two blocks away.

“Me too. I think I’ll get the Lunchables. The kids like the make-your-own pizza version,” Hope said. She took out Celia’s list and read it. “Listen to this: bananas, apples, whole-grain bread, with a note to make sure the fiber count is at least three grams, sliced turkey and sliced ham.”

“You know, Celia could make all the kids’ lunches.”

“What are you talking about? She’s too busy to do that.”

Stephanie turned slowly to face Hope. “She wouldn’t be if we lived in a commune.”

“Do you hear yourself talking?” Hope asked. “People do not break walls down between their homes no matter how much they like each other. It just isn’t done.”

“It could be,” Stephanie said. “Mark can figure it out – whatever support it needs, he can do that, come up with some plans.”

“Come on, you know it’s never going to happen. Besides, who in the world would live in a commune?”

“We would! We practically do now! Can’t you picture it? It would be so great, Hope.”

“I’m not saying that it wouldn’t be fun. I’m just saying that you need to be realistic. Besides, what would Chris say about it?”

“He’s totally in. He thinks it’s a great idea. He loves having all the kids around, and it’ll make it even easier for him to hang out with the guys and watch games and stuff.”

They stopped at the corner across from the supermarket.

“And what about the break-in at Mary’s? Wouldn’t you feel safer if we were together? Who’s going to break into a house where six adults live together?” asked Stephanie.

“Let’s just say that you could talk me into it, and I’m not saying that you can because I don’t think it is logistically possible, but I know you would never be able to talk Celia and Mark into it. Celia would worry about what people think. And if the walls are closing in on Mark now, would he really want two more kids in his household? Besides, it’s just not normal. Everyone would make fun of us—of the kids.”