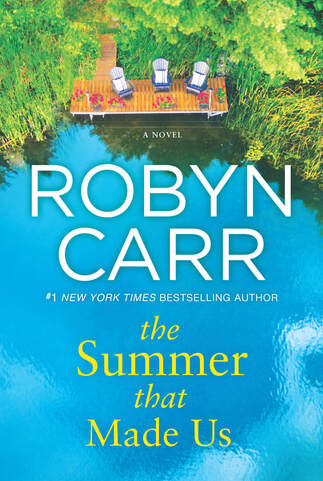 They had to share a bed, Charley told Krista, because they had only the one mattress so far with two more being delivered. And there was only the one heating pad to keep them warm. Fortunately, there were plenty of quilts and comforters and pillows. “Just like our mothers used to do,” she said. Charley took the flavored coffee and hot cinnamon biscuits to the bedroom on a tray and they nibbled and sipped while they talked.

“Oh, not now,” Krista said, sinking back against the down pillows. “Just let me smell and feel these things. Charley, your life is so rich, do you know that?”

She picked up her coffee cup, warming her hands with it and smiled. She did know. She worked hard for it—she appreciated every moment of it.

“Do you smell all these smells? The lotion and pine and linen and soap…soap that isn’t lye, I mean. The dirt and the lake and the…the…furniture polish?” she asked.

“Yes. And varnish,” Charley said. “I had the hardwood floors sanded and varnished.”

“There’s paint and wall paper paste and lemon oil.” She closed her eyes and twitched her nose in the air. “There’s vanilla somewhere, some sweet smelling cleaning fluid. The smell of brand new muslin and ages old cotton…what a great combination.”

“Can you smell the wicker? Does wicker have a smell?” Charley wanted to know.

“Sure it does—it smells like a basket or a straw hat. And you know what else? There are a thousand different blossoms around the lake. In fact, this is the best the lake is ever going to smell,” Krista said. “When everything is just coming in bloom. Except maybe the way it’ll smell in fall, when the leaves change and drop off, when the fireplaces are  all going, when the pies and turkeys are—” She stopped talking for a moment to sip from her steaming mug and think about smells. Later, when they had run out of things to talk about, she might tell Charley how prison smelled. Maybe. But she’d really rather forget.

“I never think about smells that much,” Charley confessed quietly. “In fact, the only time I was ever made tragically aware of odor was once, after Megan went through a big chemo treatment and she kept saying, ‘I smell like chemicals, don’t I?’ Her skin had a tinny odor to it. It was very strange.”

They were both quiet for a moment. “How is she?” Krista finally asked.

“Well, she’s better now than she was a couple of months ago. She’s gained a couple of pounds, she’s growing hair and her color isn’t pasty. Did she or your mom write you about this latest treatment?”

“She just wrote me what she was going to have done. She said the results have been very good. She said she was optimistic.”

“She had lung, liver, and pancreatic metastasis, not to mention some lymphatic involvement. When she was in remission they got her as strong as possible and she donated her own bone marrow for the surgery. Just in case. Once she recovered from the harvest, when the cancer was evident again, they literally wiped her out with chemotherapy. Killed everything that moved, so to speak. Then gave her a cell transplant with her own healthy cells. There isn’t anything more to do now. Except wait.”

Charley let out a small, rueful laugh. “From now on, that’s how long.”

“She’s pretty weak, but she claims she’s feeling stronger every day. She’s emaciated. The doctor has her drinking protein supplements to try to put a little weight on. And she was bald, of course.” Charley shrugged. “She takes at least one nap every day but other than that she seems to be doing okay. That doesn’t mean anything, of course.”

Charley took a moment to answer. “She’s lying about the odds, Krista.”

“Not lying, that’s not what I mean. They have had good results with this bone marrow transplant after chemo treatment…but unfortunately not on patients whose cancer is as advanced as Meg’s. That’s what this is all about, I think. This opening up the lake house, writing everyone to tell them to come back here one more time. I think she wants to come here to die.”

“Yeah, maybe not,” Charley said. But there wasn’t much hope in her voice.