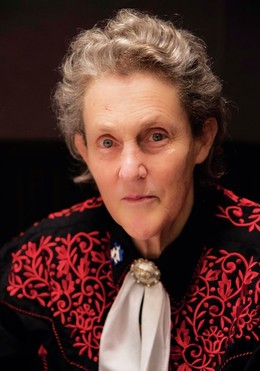 Temple Grandin, Ph.D., is a world-renowned advocate for those on the autism spectrum, a professor of animal science at Colorado State University and an animal behavior consultant to the livestock industry.

At the age of eighteen, Temple invented the “squeeze machine” (also known as a “hug box”) to help calm down her anxiety and panic attacks after realizing that deep pressure had a soothing and calming effect over her. Temple has also transformed the way livestock is handled. She is the inventor of the "double rail (center track) conveyor restrainer system," a humane, cattle handling system. She is a consultant to and designer for many of the largest animal handling facilities in the world.

As a highly sought-after speaker who shares insights about her personal journey, she has championed the idea that “thinking differently” should not be perceived as having an inferior intellect. She supports neurodiversity and has said, “If you were to get rid of all the autism genetics there’d be no Silicon Valley and the energy crisis would not be solved.” Her presentations are direct and honest to the core, so she has become an extremely popular speaker, especially for caretakers of children on the spectrum.

Temple has been interviewed by numerous national media outlets, including NPR, The Today Show, Forbes and Time. She is also the author of several acclaimed books on autism, including Different…Not Less (Future Horizons, 2012), which illustrates the idea that the world would be a much less creative and innovative planet if we didn’t have the genius of those who think differently. She is also the author of Thinking in Pictures (Vintage 2006), her autobiography which describes her experiences with visual thinking and The Autistic Brain (Mariner Books, 2014), in which she weaves her own experience with remarkable new discoveries and argues that raising and educating kids on the autism spectrum must focus on their long-overlooked strengths to foster their unique contributions.

Her numerous accolades include an international award from the World Organization for Animal Health (OIE), her 2017 induction into the National Academy of Arts and Sciences and being selected by Time Magazine as one of the "Top 100 Most Influential People in the World" (2010).

Temple Grandin, a 2010 Emmy-award winning motion picture, was based on her life.
Myrna Beth Haskell, managing editor, talked with Temple about the special challenges that girls on the autism spectrum face. Temple shares her advice on numerous topics, including how to inspire autistic students in the classroom, tackling interviews, finding a job with an ideal environment, and making relationships work.
Due to difficulty with social interaction (misinterpretation of non-verbal body language, missing social cues, difficulty developing and maintaining friendships, etc.), the teen years can be extremely troublesome for those on the spectrum. All teens deal with social pressures…but the challenges that teen girls on the spectrum face can be super difficult. What are some of these challenges?

Social relationships are just difficult. I did have a good female friend in high school, though. We rode horses together. Finding people with similar interests is SO important for both male and female relationships.

Relationship issues usually continue into adulthood. I’ve seen some good marriages, but these are less common. One couple that I know met at a science convention and another couple…well, they’re both interested and involved in computer science. Having similar intellectual interests really helps tremendously.

Some girls desperately want to fit in with others no matter what. Tony Attwood has stated that Aspie girls tend to “fake it ‘til they make it.” Do you agree? Can females on the spectrum blend in socially easier than their male counterparts? And does the amount of energy it takes to “blend in” lead to other problems, such as low self-esteem or relationship difficulties later in life?

I do agree that females on the spectrum can blend in better – well, some better than others. It’s like acting in a play. However, I’ve seen so much abuse, including spousal abuse. Many women on the spectrum are so anxious to get a guy that they get taken advantage of. I even know of someone who killed his partner’s pet! I’ve also known women on the spectrum who’ve been in relationships with guys who won’t let them have friends. Many of these men are extremely controlling, too, and try to get back into their spouse’s or girlfriend’s graces, and then they revert to treating them badly.

It’s unfortunate, but they want a relationship so badly that they give what they shouldn’t be giving. My advice is for family and close friends to not let their loved one’s share their money. Bank accounts should stay separate and prenuptial agreements are imperative.

You know, I didn’t get married because I saw so much marital strife.
However, during the Christmas rush, it can be a disaster. Take for example the present wrapping station. It’s chaotic and noisy with too much going on. It’s very important to start in a job when it’s less busy, so that when things do become more chaotic, it’s easier to deal with.

Working with others can sometimes be difficult, too. I’ve learned that when I find others' mistakes, I either keep quiet about it, or I quietly correct the mistakes if these mistakes happen to be tech errors, not opinions. This is called project loyalty. I’m loyal to the project at all costs. I want to make it work. At first, this was hard for me. I had to learn how to handle this.

I asked Temple specifically about interviews since these are stressful for any young person seeking a job.

Interviews can be a big problem. The phone is your friend because they don’t see your face. People on the spectrum tend to do better with phone interviews and should avoid in-person interviews if possible.

It’s also best if an in-person interview is with a tech person…someone who can appreciate their work and understand it. Folks on the spectrum are really anxious to show what they can do, rather than talk about it. The big thing here is that it’s best if someone on the spectrum can physically show off his or her abilities by presenting their findings, their calculations, their drawings, etc. However, she should be prepared to answer generic questions that a manager might ask, such as ‘Why should I hire you?’ or ‘What can I do with your skills?’ She needs to be able to talk about how her skills can be specifically used in the business world.

Finding a mentor is also extremely important. I had one who sought me out. He really appreciated my drawings and helped me with my business. And this relationship has turned into a really great friendship.

You have said that an autistic person comes from this perspective: ‘I am what I do more than what I feel.’ Could you elaborate?

A brain can be more thinking and cognitive or more social and emotional. Autistic people are using the ‘thinking’ part of their brain more. Many people on the spectrum are visual thinkers (like me)* or pattern thinkers (these people think spatially). There are also verbal thinkers. For me, I want to avoid any kind of psycho-drama. Instead, I immerse myself in my work.

I THINK IN PICTURES. Words are like a second language to me. I translate both spoken and written words into full-color movies, complete with sound, which run like a VCR tape in my head. When somebody speaks to me, his words are instantly translated into pictures. Language-based thinkers often find this phenomenon difficult to understand, but in my job as an equipment designer for the livestock industry, visual thinking is a tremendous advantage...One of the most profound mysteries of autism has been the remarkable ability of most autistic people to excel at visual spatial skills while performing so poorly at verbal skills. When I was a child and a teenager, I thought everybody thought in pictures. I had no idea that my thought processes were different.
When I was designing a project for a cattle handling facility, I was told to stay out of the waste water treatment part of the project. Okay…I was fine with that. It’s important for me to carve out a piece that’s mine when I’m working on a group project anyway. I’m able to compartmentalize – this is MY stuff – I just won’t go past the ‘rail switch.’ I could immerse myself in my part of the project and make my end work. You know what? My stuff’s still working, but some of the other parts that people were working on aren’t.

What brings you joy, peace or fulfillment? (#WheresYourSanctuary)?
​
My work is my life! But I do enjoy going to the movies or to a play sometimes.