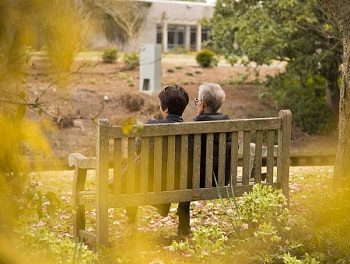 My dad and I have always had a special connection. While we only slightly resemble one another physically, our very similar personalities point to the fact that I have always been one hundred percent Daddy’s girl. My dad was and is a complex man who lived, spoke and loved very simply. He liked what he liked, avoided drama like the plague, and wore his emotions all over his face. I am proud to take after him in almost every single way.
It’s A Difficult Decision…and One that’s Not Always Yours to Make

Moving a beloved parent or family member to a nursing home or assisted living facility can be a difficult and often heartbreaking decision. However, whether you believe it to be the right time or not, the choice of whether or not to move a parent to assisted living is typically made either by the parent themselves or as the result of an emergency situation, particularly when a parent’s cognitive abilities are intact.

In my case, there was quite a stretch of time when my family frequently discussed getting some paid help for my father at home, as his girlfriend was coming over and assisting him a lot more than we felt should be expected of a 76-year-old woman. However, we held off, as most of us knew that Dad would not be comfortable with a stranger in his home, and we also knew that he would never check himself into a nursing home voluntarily. So, my family had the unenviable task of waiting until an emergency situation arose that would serve as the “catalyst” to get Dad the help that he needed. We hoped that whatever emergency ended up forcing our hand would not result in any long-term harm to Dad, which thankfully, it did not.
​The Best Facility May Not Be the Most Convenient One

After Dad was moved to what ended up being his first nursing home, my family and I were thrilled that it was only 30 minutes away. The kids and I were able to visit Dad twice during that first month he lived there – but the visits were pretty short as Dad was always very tired and seemed to just want to go to sleep. I could see the concern and confusion on my then-7-year-old daughter’s face as to why Grandpa said goodbye to us so quickly, so I made sure to explain that it was nothing she did. Also, I found out during Dad’s stay that the facility was understaffed (a common issue amongst nursing homes), and staff members who were present were often impatient with my somewhat-curmudgeonly father. When I am sad, I tend to sleep a lot, and I started to wonder if that was what was happening with Dad since we are so alike.

Shortly after our second visit, one of my siblings ended up finding an opening at a fully staffed, high quality, assisted living facility that only accepted former military veterans as patients. My father is a U.S. Navy veteran, so my brother jumped on getting my father moved into this more desirable facility.

Since Dad moved there, it’s obvious how much happier he is. When I’ve spoken with him on the phone, it sometimes doesn’t even seem like I am talking to a man suffering from dementia. It’s wonderful to feel that I have my Dad back!

Note: It’s imperative to be aware of your loved one’s moods and behaviors. Have they changed since moving into the facility? Is s/he more reserved or fearful? Your loved one may not want to broach complaints if s/he fears repercussions. In some instances, you may need to speak to an ombudsman.

Find Ways to Keep Your Loved One Close

Moving Dad to the new facility did have one drawback – it’s located an hour and a half away from my home. Therefore, getting out to see Dad has been much more difficult. However, I am quite thankful for cell phones and Facebook which have served Dad well in keeping up-to-date on his grandkids and miscellaneous family news.

I am incredibly thankful that Dad is alive, well and thriving in assisted living. However, holidays and family get-togethers certainly aren’t the same without him. We do make sure to call him when we all get together, but obviously a phone call isn’t the same as spending time with him in the flesh. It will take some time for my family to fully adjust to this new version of “normal.” However, above all else, what’s most important is that Dad is safe, thriving, and getting the care and support that he needs.
ADDITIONAL RESOURCES:

Your Guide to Choosing a Nursing Home (Medicare.gov)

How to Choose a Nursing Home (National Institute on Aging)
Jill Valentino is an educator, freelance writer, essayist, tutor, and educational video and teaching materials creator. Her work has been published in Good Housekeeping, Redbook, Country Living, Elle Decor, House Beautiful, Woman's Day, and Hudson Valley Parent magazine. She is a regular contributor for Sanctuary.