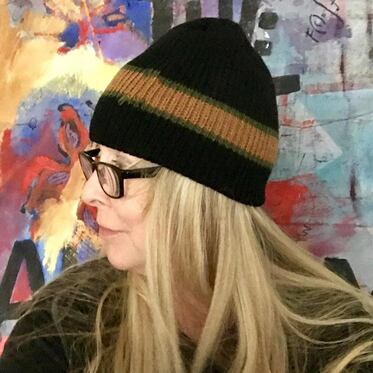 Keri Bowers is co-founder of The Art of Autism, a nonprofit which provides a forum for displaying, selling and promoting the art of autistic individuals. She is also the founder of Normal Films, an indie film/production company producing documentary films in autism and other developmental disabilities. Keri’s work as an advocate, artist, filmmaker and writer has spanned nearly three decades and has helped to create a positive impact on the autism community throughout the world.

The core of Keri’s work in the arts & autism began when her son, Taylor, was diagnosed with autism in the early 1990s. With little known at the time about autism, and even fewer reliable intervention resources, Keri used painting, music, drama, movement, and video modeling to support Taylor’s language and developmental skills. Now 29, Taylor lives in his own home, with progressive supports surrounding him, and works as a video game reviewer.

Keri is a featured columnist for Autism Asperger’s Sensory Digest and the owner of Bowerbirds Art, Fashion and Shoes, a collection “inspired by autism and painted by the heart.”
Myrna Beth Haskell, managing editor, spoke with Keri about her experience parenting a child on the spectrum before parental supports were easily accessible, The Art of Autism’s projects that support autistic creatives and her production company, Normal Films.

Could you tell me about some of the challenges you experienced while raising Taylor?

I like to explain by saying that I was ‘doing autism’ before the internet. My son was born 29 years ago on Christmas Eve. I remember painting with my son in my arms – he was about four months old - and putting paint on his fingertips and grazing them across the painting. He freaked out. He hated it. At first, I was in denial. He was a boy…and boys develop slower than girls, right? But I also instinctively knew that I needed to keep doing this. Something inside me urged me to use art to stimulate. It took a while, but he eventually started to play with the paint. This is referred to as sensory integration today. He was slow to develop speech. At three years old, he maybe had 20 words. I reasoned that if he could say one word, he could say 2, and so I forged ahead by singing social stories* to him to encourage engagement.

My mission was for Taylor to live as independently and as inclusively as possible, and I was navigating my own way. This was before the DSM IV** included Asperger’s as a diagnosis, and he wasn’t diagnosed until he was six.

I was a single mom, and it was painful to have to hire a nanny to care for my children [Keri has two sons, Jace was born when Taylor was six], but I had to drive an hour and a half each way to my job at the law firm.*** I missed some of the precious moments, such as Taylor walking for the first time at about two years and two months. In the early years, a nanny would quit on a Friday, for example, and I’d have to hustle to find a replacement - a stranger - by Monday. So when a new person came into the home, it was difficult. Taylor was an anomaly, and he couldn’t communicate his wants and needs to these people charged to care for him, except through behavior.

I still have a drawing he made at three when he and his nanny got lost and had to ask a stranger to help them find their way back home. Those were frightening times that many working - and especially single moms - go through. But my son could not communicate, so the layers were more complex and worrisome.

*Social Stories are a social learning tool that supports the safe and meaningful exchange of information between parents, professionals, and people with autism of all ages. The people who develop Social Stories work on behalf of a child, adolescent, or adult with autism, the Audience. This is an evidence-based practice used world-wide. (Carol Gray, developer of Social Stories)

***Keri was a paralegal for Motley Crüe.

What is your best piece of advice for other moms with children on the spectrum?

Let your child fall down and fail in the safety of the life she has while you’re alive. She needs to learn to get up. If you wait until maturity, it will be more difficult.

It’s important to understand that learning cannot happen when a child feels bad about himself or herself. If my sons made a mistake, I would tell them, ‘How is that result working for you?’ Both of my boys learned to be good decision-makers because of this approach. Emotional wellness is also extremely important, and they need to be proud of themselves.

I would suggest that parents put their children into community service. This is a great way to learn social skills and for those on the spectrum to feel more connected and to look outward. They learn to empathize with those who need their help. We worked with an organization that sent gifts and needed items to battered women. When Taylor was 15 years old, he wanted to deliver the gifts himself, but that isn’t how they usually did things because of security. We found a way for him to be able to hand the gifts over at an event…that physical act of giving something to an actual person taught him about human connection.
​
I also believe that mothers and fathers need to nurture themselves in more powerful and consistent ways. I see so many who are weary, depressed, anxious, negative, exhausted, and/or isolated from joy and emotional well-being. It's easy to fall into putting our child first at all times at our own expense. We become martyrs of this ‘cause’ or to our child's needs. It becomes a cyclical force of exhaustive and often negative energy when we do not take time to nurture our own spirits, sense of play, relationships, hobbies and mental health. Parents need to say yes to life. Your child will know if you’re not happy.

You have a love of the arts. Is this why you decided to start a nonprofit that highlights the artwork of autistic creatives? ​

​Painting, photography, dance, writing, music, film, and other creative and spiritual pursuits are the essence of my being.
Any successful events you’d like to share?

The event we did with Mainly Mozart [a nonprofit enriching the lives of musicians] was incredible. In May 2018, The Art of Autism curated the Genius Showcase for the Mainly Mozart nonprofit in San Diego.
​Tell me about Normal Films. Was the film Normal People Scare Me the first you worked on with your son?
Anything else you’d like readers to know?

Autism is a reason, NOT an excuse. Life hands us pearls wrapped up in choices.

I live in gratitude. If I’m lost on the subway or someone cuts me off on the road, I embrace the fact that I have so many reasons to be thankful. Even when I’m on my hands and knees, scrubbing the floor clean…it’s pure…it’s love.
​