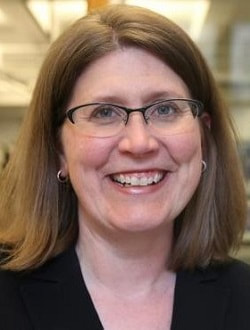 Angela Timashenka Geiger joined Autism Speaks as president and CEO in February 2016. In her first year, she revised and relaunched the organization’s mission to explicitly include people with autism both across the spectrum and throughout the life span.

While huge progress has been made in increasing awareness of autism, the new mission goes a step further, striving to increase understanding and acceptance of people with autism. To support this inclusive and aspirational mission, Angela launched a long-term strategic plan, which was well-received by donors, stakeholders and the autism community. Beyond creating a strategic vision for the future, Angela also led efforts to improve the financial position of Autism Speaks, producing positive net assets for three consecutive years. This was achieved while the number of individuals and families served by the organization grew by 70%.

Before joining Autism Speaks, Angela was the chief strategy officer for the Alzheimer’s Association, a leading organization with global, national and local impact. As part of the senior management team, she worked to coordinate and execute strategy and to accelerate organizational growth. She has had accountability for more than $280 million in annual fundraising, programs and services reaching three million people a year.

For eight years, Angela held a variety of leadership roles at the American Cancer Society. She also worked with the American Lung Association of Western Pennsylvania and with higher-education institutions. She has contributed to various conferences and publications.
About Autism Speaks® :

Autism Speaks is a nonprofit organization dedicated to promoting solutions, across the spectrum and throughout the life span, for the needs of individuals with autism and their families. The organization does this through advocacy and support, increasing understanding and acceptance of people with autism spectrum disorder and advancing research into causes and better interventions for autism spectrum disorder and related conditions.
Myrna Beth Haskell, managing editor, spoke with Angela about the revised and inclusive mission of Autism Speaks, the change over the years in public awareness and understanding of autism, and her advice to other women leaders.

​​When you joined Autism Speaks, you revised and relaunched the organization’s mission. Could you explain what this entailed and the reasoning behind the relaunch?
Has awareness greatly changed?

Years ago, when a parent heard the word ‘autism,’ they likely were hearing this for the first time. Today, parents are proactively talking about it. Public awareness HAS changed, and schools have vastly improved [in terms of providing supports and resources]. But these improvements vary state to state and school to school, so there’s much more to be done.

Does this new mission include the development of resources specifically for females on the spectrum?

We do know that boys are four times more likely to be diagnosed than girls and that girls are often diagnosed later [in life]. However, our focus is to provide resources that help everyone on the spectrum…into adulthood, such as providing resources focused on readiness for employment.* But these resources aren’t female-specific.

*This preparation is imperative. ‘Over the next decade, an estimated 500,000 teens (50,000 each year) will enter adulthood and age out of school-based autism services.’ (Statistics from AutismSpeaks.org)

Note: Readers may contact the Autism Response Team (ART) at Autism Speaks. This is an information line for the autism community. Their team members are specially trained to provide personalized information and resources to people with autism and their families.
Females with autism are often diagnosed later in life – into their teens and beyond. Or they might be misdiagnosed – with other developmental delays, such as an expressive or receptive language delays. What are some of the reasons professionals (pediatricians, educators, etc.) might miss autism in young girls?

There needs to be more research on this. What we have learned is that girls are better at masking symptoms and often have better linguistic ability earlier in life.

Many in the autism community were concerned that Asperger’s syndrome was taken out of the Diagnostic and Statistical Manual of Mental Disorders (DSM-5) in 2013. Instead, high functioning autistics with primarily social delays/struggles were included in the broader “autism spectrum disorder” diagnosis (which includes a range of effects and severity for each individual). Has the community adjusted?

The most important thing – regardless of how someone identifies himself/herself – is that we provide resources for each individual. For those who were diagnosed as having Asperger’s, they are probably comfortable continuing to use that because it is a diagnosis they have identified with. But for those more recently diagnosed, it’s not really something they think about.

Note: Healthcare providers can still indicate a diagnosis of Asperger syndrome (or another previously used autism category) in a patient’s medical record, alongside the current DSM-5 coding for “autism spectrum disorder.” Colleges and school districts may vary in their policies for educational records. (AutismSpeaks.org)

Social Communication Disorder: This new diagnosis applies to people who have persistent problems with the social use of language, but don’t have restricted interests or repetitive behaviors. Some people who would have previously received a diagnosis of PDD-NOS may now receive a diagnosis of social communication disorder. However, this should apply only to newly diagnosed people. It should not be applied retroactively to someone already diagnosed with PDD-NOS under the DSM-IV criteria. (AutismSpeaks.org)
You’ve been a leader in the nonprofit sector for many years. Based on your personal journey, is there any advice you’d like to share with other women business leaders or those embarking for the first time in an executive role?

I have a couple of things I want to point out.

The higher up you go, the more important it is to listen – ask others, ‘What do you think?’ It’s not just about problem-solving; it’s also about teaching others how to be successful in doing their part. Secondly, I’ve learned to almost never say ‘no.’ If there’s an opportunity to grow the organization or to make things more efficient, I go for it – wholeheartedly! Lastly…be kind. There are lots of opportunities for decision-making. You need to approach a situation from a point of kindness.

Is there anything else you’d like our readers to know?

It’s our 15th anniversary this year, and our campaign asks that everyone join in and help us make 2020 “A Year of Kindness’ – a million acts of kindness, large or small.
Join the movement: Take the #KindnessCounts challenge or find more ways to contribute and take action HERE.

Anytime I’m at the beach or lost in a book. It’s even better if these are happening together!