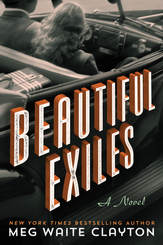 We start with the oldest - letters mostly. My son reads Matie’s words to me (“Martha, dearest”) and mine to her, thin blue airmail homing birds of love. He reads from my exchanges with editors and with H.G. Wells and Eleanor Roosevelt (me at my ghastliest even if she never would say so), correspondence I doom for the most part to brown envelopes bound for the archives in Boston. This little writing cottage has become too much for me and my fading eyesight, however fierce an old lady I might be, so my son and I sit before the fire in the grate, and he reads each bit for a paragraph or two, and often to its end, before I decide its fate. When he extracts a crinkly airmail sheet and reads, “‘Dear Mookie,’” though, I take it from him and set it to the flames, and watch the page blister blue and red until it falls to ash. I don’t need to see the ink to know the signature: “Your comrade, E.,” in the early days, or later, “With love, your Bug” or “your Bongie.” Bongie - one of several nicknames we called each other interchangeably. But I was never really his Bongie, even if I meant to be, or wanted to be, or tried. I was only ever Martha Ellis Gellhorn, even after I became Mrs. Ernest Hemingway.

It was a bright stinking mess of a time, the winter I met Ernest. Dad had been dead a year that Christmas, my twenty-eighth, and while Matie was bearing it, the blue of her eyes was faded and the gray in her blond hair suddenly overwhelmed. She hadn’t wanted to spend the holiday in St. Louis without Dad. Of course she hadn’t. But we were going mad with boredom in Miami. So we set off in the car toward a little seaside town whose name on a tour bus captured our imaginations. Key West. My brother drove, with Matie beside him and me buffeted in the open-window back seat, as we crossed the long stretch of bridges to the end of the earth: a place delightfully hot and falling to pieces, with townies content to do nothing but fish for sea turtles and steal coconuts, to gossip and sunburn on the porches of charmingly weary white-frame houses and on beaches fishy with the sweetness of The Odyssey, Moby Dick, the little mermaid who can’t bring herself to slay the prince to save herself.

“Surely we can’t pass by a place called Sloppy Joe’s without a peek inside, can we?” Matie asked. Already, we’d climbed the lighthouse for the view and picnicked on the beach, brushed the sand from between our toes, piled our sweaty selves back into the car to look for a place to spend a few nights - a place where I might wash the wind-tangles from my hair in a cooling bath. But I was never one to deny my mother anything, any more than she denied me. Dad, he’d been the denying one.

Did we see Hemingway first, or did he see us? People do turn to the light of a door opening in a dark bar, and our pupils were shocked by the contrast from brutal sun and hard road to dim light and soft wood, melted-ice dampened floors and bottles of Campari, whisky, rum. A huge bartender welcomed us from behind a long, curved bar, while at one end of the place patrons returned their attention to a rowdy pool game, with money on the rails to make it real. A second man nearly as large as the bartender rose with effort from a chaos of papers on the bar. Grubby white T-shirt. Grungy white Basque shorts held up by, of all things, a length of rope. He made a surprising racket in the few steps it took to reach us, to add his voice to the bartender’s welcome.

A slow bead of sweat trickled down my spine to settle into the fabric of my black sundress, already damp from all the time pressed to the car seat and no better for the time on the hot sand.

Matie touched a hand briefly to my sweat-damp shoulder, a reminder to stand up straight and never mind my gawky tallness, as I tried to square the rope belt and the shoeless feet with this man’s asymmetric widow’s peak that was, indeed, Ernest Hemingway’s. I knew that hairline, and the sad, seductive eyes, too; I’d awoken every morning of my short year at Bryn Mawr to see those eyes staring down at me from a photo tacked to my dorm room wall. His clean-shaven face and impeccably knotted tie under a halo of perfectly-polished prose—what girl wouldn’t be mad for that handsome young writer of the lost-generation Paris café life?

“I’m Edna Gellhorn, and this is my son Alfred,” Matie said to Ernest Hemingway. “And this is Martha.”

Just “Martha,” not “my daughter, Martha.” You can see how that might have left Hemingway taking my brother and me to be newlyweds fresh off a yacht, but I was lost in thinking Ernest damn Hemingway who ought to be out catching an impossibly huge marlin off the coast of Cuba, or shooting some heartbreakingly wild creature in Tanzania, or writing eloquently from Paris where, in the years I’d lived there, I’d forever hoped to catch a glimpse of him the way any writer hopes for a glimpse of her literary hero. He and F. Scott Fitzgerald, whose photo I might have hung in place of Hemingway’s if only his looks were as grand as his writing.

Nothing ever happens to the brave — I’d used Hemingway’s words as the epigraph for my already-wanting-to-be-forgotten first novel, What Mad Pursuit. Words spoken by his Great War ambulance-driver protagonist in A Farewell to Arms, to which the nurse he had fallen in love with responds simply that they, too, die.