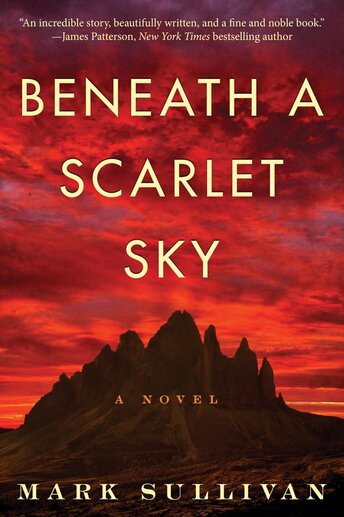 The leader of the group, seventeen-year-old Pino Lella, looked at the others in the glow of the miner’s lamp he wore.

“What?” cried one of the Jews, a middle-aged woman named Elena Napolitano, at least according to her forged documents. “Up here?”

“This is usually where storms happen,” said Pino’s fifteen-year-old brother, Mimo. “But don’t worry, Pino knows the way. Father Re taught him well.”

Pino did know the way up over the top of the Groperra, a towering crag above the high alpine settlement of Motta, and the Catholic boy’s school where he and Mimo lived. He knew every step of it by then.

“Just put your feet where I do, and you’ll be fine” Pino said to Mrs. Napolitano, and the young Jewish family of four in his charge, the D’Angelo clan, according to their forged documents, a mom, a dad, a nine-year old son and eleven-year-old daughter.

For the next hour, as daylight came amid falling snow, they made steady progress. The snow was good, Pino decided. It would hide them from all prying eyes below them.

Super-cooled by the frozen crag, the clouds began to hurl snow down on them. Pino dug out glacier glasses his father had given him for Christmas, with leather side blinders to keep out the snow. He took a ski pole from Mrs. Napolitano and probed his way forward, intensely aware that the higher they got, the greater the likelihood of a false step proving fatal.

The wind began to swirl, causing whiteouts. For the first time, Pino felt doubt and fear creep into his mind. At times he was climbing blind and it rattled him. The way they were all tied together, if he took the wrong angle, or made a misstep, with his weight they’d all be going for a bone-breaking ride. He felt the rope tug him to a halt.

“Neither can I,” her mother said.

“We’ll wait then,” Pino said. “Turn your face out of the wind until the gust dies.”

During those gaps where the wind was not a gale and Pino could make out the route, they fought their way upward until he felt the path level. Ahead fifteen yards, he could make out a catwalk of stone about twenty feet long, eighteen inches wide and flanked on both sides by snow that disguised the mouths of avalanche chutes that fell away for God only knew how far.

“We go across one by one here,” he said. “See the bowls of snow next to the spine? Don’t step there, just put your feet where I do, and you’ll be fine.”

“What’s under that snow on the sides there?” Mrs. Napolitano asked.

“C’mon now,” Pino said. “You’ve come this far. And I’ll have the other end of the rope, just like before.”

She made a puffing noise, and nodded weakly. Pino untied the group line and knotted it to Mimo’s to create one long rope. While he worked, he whispered to his brother. “From now on, keep your mouth shut.”

“Sometimes the less you know the better.”

“Where I come from, the more you know the better.”

Seeing it was fruitless to argue with his pig-headed brother, Pino tied one end of the rope around his waist. He imagined himself a tightrope walker, and held the ski poles horizontal to help him balance.

Each step was excruciating. He’d test first with the toe of his crampon, kicking gently until he heard rock or ice, and then pressed his heel directly onto that spot. Twice he felt his balance teeter-totter, but managed both times to right himself before reaching the ledge beyond the catwalk.

Pino found a piton he’d driven into the rock face months before, and got the rope rigged through it. Mimo pulled back the slack and the rope went taut. The wind gusted. The whiteout returned. They were visually separated for more than a minute. When it calmed and he was able to make out the others beyond the catwalk, they looked ghostly.

“Send the first one,” Pino called.

The D’Angelo children went first, Anthony, and then Judith, holding onto the rope and putting their boots in Pino’s prints. They accomplished the crossing with relative ease. Mrs. D’Angelo came next, holding one of Mimo’s ski poles and the rope.

She froze once passing between the avalanche chutes, but her young son called out, “C’mon, Mamma. You can do it.”

She pushed on and wrapped her arms around her children when she reached the ledge. Mr. D’Angelo came next, and accomplished the feat in seconds.

The wind gusted before Mrs. Napolitano could begin. Pino cursed to himself. He knew that the mental trick to crossing something like the catwalk was not to think about the penalties, and put one foot in front of the other. Nothing more. Nothing less.

When the wind ebbed and the visibility returned, Mrs. Napolitano started. Three quarters of the way across, the wind picked up, and she vanished in swirling white.

“Don’t move a muscle,” Pino shouted into the void. “Wait it out!”

Mrs. Napolitano did not reply. He kept testing the line gently, feeling the weight of her until, at last, the wind sighed and she was standing there coated in snow, as still as a statue of salt.

When she reached the ledge, she held onto Pino tightly for several long moments, and said, “I don’t think I’ve ever prayed that hard in my life.”

“Your prayers were answered,” he said, and then whistled for his brother.