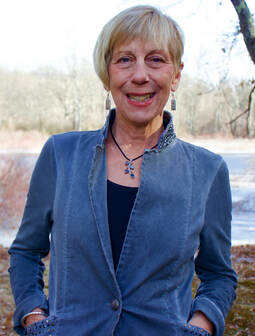 Kelly DuMar is a poet and playwright as well as an empathic and astute guide who leads Aim for Astonishing photo inspired creative writing workshops for personal transformation and artistic expression.

Author of three poetry collections and many plays, Kelly is also author of Before You Forget - The Wisdom of Writing Diaries for Your Children. She produces the Our Voices Festival of Boston Area Women Playwrights, held at Wellesley College and now in its 13th year, and she produces the annual Boston Writing Retreat & the week-long summer Play Lab for the International Women’s Writing Guild (IWWG), where she serves on the board. Kelly founded the Farm Pond Writers Collective to guide women writers to write from their personal photos, develop their artistic voices and connect deeply with their creative lives. She shares her nature photos and creative writing in her daily blog, #NewThisDay.
Nancy Burger, senior editor, spoke with Kelly about her creative exploration and passion for nature-inspired and photo-inspired writing.

On your website, you describe yourself as a "playwright, poet, and creative writing guide who mentors new & experienced writers to reclaim your imagination." Where do you think imagination gets lost, and why do you think people need to re-introduce it to their lives?

I felt like my imagination, as a kid, was my life force. I was so engaged in play, without being self-conscious about it. And then, as a teenager, I became self-conscious and play went out the window. I think some of us lose it in school, where we are sometimes forced to become formulaic and where our creativity can be criticized out of us. When we're in art, music or dance classes as young children, I think authority figures tell us whether we have talent and 'creative.' I feel like it's so prescribed, that we get told who we are rather than getting an opportunity to realize what brings us joy and makes us feel alive.

You started out as a therapist. What was the bridge between that work and your current work in the creative arts?

When I was working as a therapist in my mid-twenties, I discovered psychodrama training and experienced a massive awakening from my first training session. It was a methodology that was all about play, based on the notion that healing is really about creativity and spontaneity. Suddenly, in this therapy modality, it was all about getting back in touch with those things that are so important to me. At the point when I attended my first psychodrama training session, I had forgotten how to play. This idea that I could learn to be playful as an adult changed my life. I was no longer this introverted, self-conscious, private person, but rather someone learning to take risks and try things.

In your earlier practice as a therapist, did you see the need for this type of therapy?

I worked with a lot of adult trauma victims of childhood sexual abuse. Many of them didn't have any childhood memories - the trauma killed the good memories as well as the bad and robbed these people not only of their innocence but also of their imaginations. I think we all want to be listened to, to tell our stories, to feel like they're impacting other people.

Can you describe what psychodrama therapy involves?

It really involves acting out your story with others. The stage becomes a place where your imagination is the healing force in a group where everyone engages as they share their stories and take on different roles. You might be asked to take on the role of someone's mother, or their dog, or you might ask the same of someone else. J.L. Moreno* was the pioneer in psychodrama, and he believed that if people could reconnect with their spontaneity, they could develop their creativity. He believed creativity was essential for survival.

*Jacob Levy Moreno was a Romanian-American psychiatrist, psychosociologist, and educator, the founder of psychodrama, and the foremost pioneer of group psychotherapy.

Did you see positive results from this type of therapy?

Oh yes, absolutely. When you can learn to be playful, it becomes a way to connect with your spirit. In psychodrama, your mind, body and spirit are all engaged. Your imagination is where you can learn to grow and to change. When you're in a group where creativity is valued, you can't make a mistake. You're not criticized.

Do any of the writers you work with come to you thinking that they're not creative?

Yes, but I don't believe it. We haven't made it safe for people to be vulnerable with their creativity in a lot of environments. I really value creating experiences where you're going to be getting out of the self- judgement zone and encouraged to go with it. Photographs are a perfect way to enter that three-dimensional world.

How did it come about that photographs became this bridge for creativity?

I think it had to do with my involvement in psychodrama. That set me up, in my forties, to say, "I think I'm going to try writing some plays." I was walking on the beach for my fortieth birthday, and, shortly thereafter, I joined a playwriting group. From psychodrama and playwriting, I came to this place of seeing the world as a stage, of focusing on the visual element to play.
When people write from their photographs in your workshops, are they also sharing in real time with other group participants?

Yes. In one of the photo writing groups that I do, one woman wanted to bring out her travel photos from Cambodia and India. Those fabulous travel photos were stuffed away in boxes, but she brought them in and began to unpack them with other people. Her stories about spiritual discoveries in India suddenly became vital again, and, as she was sharing, she was also inspiring others. Trust is built that way, and people start to tell the truth more and more. The photos are wonderful ambassadors for saying, ‘I want to understand this and help you understand it.’ Once you engage with a treasured photograph, you hear the story it's trying to tell you. You have an ‘Aha’ experience that helps you live your life differently. I have one group of women that have been writing together for ten years. They're a tribe…they know each other's secrets and have made a safe place for themselves to become even more whole.

Your workshop is called “Aim for Astonishing.” The name is new, but you've been teaching these workshops for close to a decade. What's the inspiration behind the name?

It really came from a deep engagement with my Aunt Marian and her photograph, and how she was a mentor and a guide of my spirit. As she was dying, she gave me the opportunity to take care of her, and I think it was a gift. There was something she was imparting to me by giving me a caretaker role. She was inspiring me. It was an initiation. So, Aim for Astonishing was what she was doing in that iconic photo, by aiming that arrow. This is what I want to guide people to do, to aim that arrow. When you go into your personal photos, you find stories that only you can tell. Aim for astonishing yourself because, if you do, you'll astonish other people. That's the secret reveal. You can trust what you know, you can trust what you feel, and you can trust that the pictures want to give that astonishment to you.

You have a new poetry collection coming out titled "Girl in tree bark." Tell me about it.

‘Girl in tree bark,’ the title poem, is a photo-inspired piece about turning 60. The collection is about my childhood, family and relationships. All the poems are nature-inspired explorations of the psyche.

You walk in the woods every day and take photos, then blog about them?

Yes, and I take photos that are whispering to me. I see something, it calls to me, and I become curious about it. It might be a flower or a piece of bark or a seed pod - I feel like I have to take a picture of it, then I blog from it. One day, I was walking in the forest, and I saw the image of a young girl in a piece of tree bark lying on the ground and began asking myself…what was I going to do with the rest of my life? My parents were gone, my children were grown, and I wondered ‘who am I at 60, and what am I going to do with the next thirty years of my life that isn't about taking care of other people?’

Do you find it difficult to write a blog every day? How do you maintain motivation?

This is my third year, and it's my favorite part of the day. It's my passion. The gift of being in this space of my life, because I'm not distracted by taking care of children or parents any more, nourishes my artistic spirit. My passion for taking photographs of beautiful things every morning is my breakfast, it nourishes me artistically and spiritually. And then, because my photos make me feel so good, I'm happy to spend the time with them and write about them. It's a delight for me, because it's all about attending to the moment, to my creativity. We have an opportunity to follow our own creative impulses to take care of ourselves.

On the Charles River…in the woods, where I live with my dogs. To me, that's the ideal sanctuary.