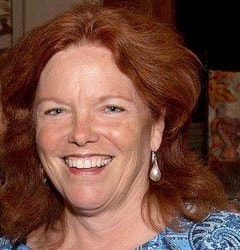 Lee Rankin is a successful farm business owner, team leader, farm consultant, and author committed to helping people connect to one another and to what’s real in their lives.

In 2001, Lee took a leap of faith and started her life over in the mountains of North Carolina, alone with her two-year-old son, Will. Her dream was to start an alpaca farm and create a safe place to raise a boy. Seventeen years later, Apple Hill Farm is home to nine kinds of animals: alpacas, llamas, horses, donkeys, angora goats, Great Pyrenees, chickens, potbellied pigs and Zebus. Each animal has a purpose and a name. Together with their human team, they create a magical place filled with memorable stories and heart-warming moments.
Apple Hill Farm is a thriving, award-winning agri-tourism business that offers educational guided tours and the largest selection of yarn and products made from alpacas in the High Country of North Carolina.

Author of Cooking Up a Storm, Lee is at work on her first memoir and uses the farm and her passion for fiber arts to keep her balanced.

Nancy Burger, senior editor, talked to Lee about her journey as a farm owner and entrepreneur.
Were there moments when you questioned the decision?

No. Once I had the idea, I was so compelled to go that I couldn't have stopped once I started putting one foot in front of the other. You can't force something like that to happen, and you can't stop it, either.

But you had survived breast cancer before conceiving Will. Wasn't that in your mind also - that something might happen to you?

My prayer was that I lived until he was 16. With no family support, that was terrifying to me. That was a real fear.

You were living in Kentucky when Will was born. Did you have support from friends on pulling up stakes and moving to North Carolina to buy and run an alpaca farm?

My friends thought I had lost my marbles. The first time I went to North Carolina I brought Will, and we stayed for a month to look at property. A voice in my head told me that if it was the right decision, we would find the right place. After two weeks, we hadn't found anything, so I thought maybe it wasn't going to happen. But that's when we found it.

Was it a big financial risk for you?

I went out on an emotional limb more than on a financial one. I had Will when I was 38 years old, so financially I was pretty set and still had a business in Louisville that was being managed. That's the one piece that I didn't really worry about. There have been times when I questioned whether it was a good investment, though. It has been a long-term investment, for sure, but I didn't do it for money.

I just listened to your podcast with Charley Gilkey and something you said really hit me: "You don't have to know how to do something to do it." That's so true.

I would argue that there is rarely anything that we know how to do before we do it the first time. We go to school to be in business, but school doesn't teach you how to be in business, it teaches you school subjects related to business. There isn't anything we do that we absolutely know how to do before jumping in the first time. And I'm always learning…because the farm I'm running today is different than the one I started seventeen years ago. I learned a lot of things the hard way.

In the podcast, you also talked about the mountain lion attack* that happened six months after you started the farm.

Yes, Charley asked me if I feared for my life when that happened, and the interesting thing is that I never did. It didn't really occur to me at the time. I was concerned about the animals, about trying to save them.

*Six months after moving onto the property and starting the farm, four of Lee's five alpacas were killed by mountain lions.

When you bought the property, you didn't know anyone in the town or have any connections there?

I didn't know a single person, but I haven't met a stranger here yet. One of the things that was amazing  during that first month we stayed here was that I never felt judged for being a single mother. People embraced us. It's a very special place. This is an unpretentious, welcoming and heart-warming community. These folks are very pure in the way they live and express themselves. There's a sense of appreciation that's built into the culture.
Do you think the times we live in are drawing people to the farm?

There are many elements of what we do that are so resonant right now. Our animals work together and are respected. If we get an animal that has had a tough past, we work to heal that. We also tell stories of the animals, and people want those feelings. They remember those stories.

And now you're writing a book about your story. How is it going, and when do you think it will be published?

It's going well. I might have a draft done in May. I'm not sure what I'm going to do from a publishing standpoint, but I'm figuring that out. This is a traditional memoir, and I think it's very important to get the story down first.

What are your thoughts on the evolution of your seventeen-year journey?

It's interesting because I feel like I stumbled into this. I did it for a lot of reasons in the beginning, but now I see that I'm really an entrepreneur who loves connecting people. I love this kind of stuff. There are a lot of pieces to the things that I'm doing that reflect who I am, and the writing is an important part of that. I'm leading a team and working on training and leadership skills, and I'm excited about sharing my experiences at speaking engagements. Literally, everything that happens at the farm becomes great fodder for that. It all weaves together, and it's incredible.

I find sanctuary in the animals. I'm the night duty person, so I go out to our big barn and give treats, make sure everyone has water, and give carrots and kisses to the horses and talk to the cows. It's the last round of the day, and I give attention to whoever needs it. I also find sanctuary in knitting, and in the space between the barn and my house at night when I look up at the stars.