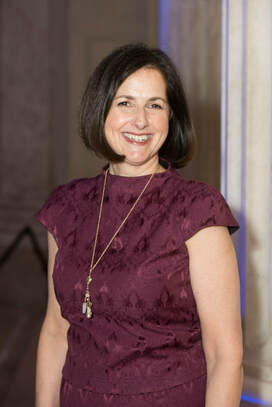 Abbie R. Newman, RN, J.D., is the CEO of Mission Kids Child Advocacy Center. Abbie began her professional career as a registered nurse specializing in pediatrics before returning to law school and obtaining her degree from Fordham University School of Law. She practiced law in Philadelphia, PA and became a shareholder at Post & Schell, P.C., specializing in medical malpractice defense of medical professionals for almost 20 years.

Abbie began her work with the organization as the founding Executive Director of Mission Kids Child Advocacy Center (CAC) of Montgomery County in 2008. As Executive Director, she built the collaborative multidisciplinary team into a nationally accredited CAC which has served over 4,000 abused children and families. As CEO she brings the leadership of Mission Kids statewide, nationally and internationally to help victims of child abuse, including victims of human trafficking and other forms of commercial sexual exploitation.
​
Abbie is the former president of the Pennsylvania Chapter of CACs and the current and founding Chair of the External Affairs Committee of the State Chapter. Abbie serves on the CAC Advisory Committee in Pennsylvania, charged with awarding state funds to both established and developing CACs. She was also appointed by Governor Corbett to the Pennsylvania Victim Services Advisory Committee, charged with awarding $100M in funds to victim agencies across Pennsylvania, and re-appointed to that committee by Governor Wolf in 2018. Abbie also works on the state and national levels with legislators to strengthen child protection laws, increase funding to agencies serving victims of child abuse and neglect, and develop and sustain child advocacy centers as a model for child abuse investigation and prevention.

Mission Kids Child Advocacy Center is a nonprofit, 501(c)(3) organization based in Montgomery County, PA. The nationally accredited child advocacy center (CAC) offers a comprehensive, centrally located, multidisciplinary team response to allegations of child abuse in a dedicated, child-friendly setting to achieve justice for child victims and promote their physical and emotional well-being. Since its establishment, Mission Kids has served over 4,000 children in Montgomery County, PA and surrounding areas.
Nancy Burger, senior editor, spoke with Abbie about the inspiration behind Mission Kids, her passion for child safety and how to fuel the progress in raising awareness around child abuse and human trafficking. ​
Do you think our country is making progress in the fight against child abuse? How have things changed in the last several decades?

In the 1980s, I was a nurse at Mount Sinai Medical Center in New York. We had child abuse victims - but at the time, that meant victims of physical abuse. I could tell you the types of bone breaks or burn patterns you might see on a child who has been a victim of physical abuse, but we didn't talk about child sexual abuse. It wasn’t discussed. It wasn't brought up. It wasn't spoken about. So, things have certainly changed, and I think in a good way.

Do you think we have better "diagnostics" now with respect to child sexual abuse because we're talking openly about it and have access to forensic interviewers who can get information without traumatizing the child?

Yes, especially with the advent of child advocacy centers, which started in the early 1980s or so. At the time, the statistics were that 1 in 4 girls and 1 in 6 boys would be sexually abused before they turned 18. We're not sure what the statistics are now, but there was a study that came out several years ago showing that the numbers are now closer to 1 in 10, so we have made some progress. Ten percent of all children is still far too many, but it's certainly better than 20% of all children.

Besides the obvious physical signs of child abuse, are there red flags an adult might see that might indicate child sexual abuse?

It's tough…it's really tough. The thing is, it can be very difficult to distinguish child sexual abuse from other types of child stress or trauma. What you can see, however, is a drastic change in a child's behavior. If, for example, they become withdrawn or depressed or start exhibiting anger issues - that could be a sign. But there could also be a situation where a child suddenly becomes the ‘perfect child.’ Or there might be no signs at all or behaviors that just get chalked up to adolescence. So, it can be very difficult.

I guess the takeaway is to pay attention and keep an eye out for changes in behavior.

People might be nervous to report suspected child abuse for fear of negative repercussions for the child (i.e. a caregiver lashing out if authorities are summoned to the home). What advice would you give someone in this situation?

I think that's a very good point and one that frustrates me constantly. But what I've heard often is that people are afraid of reporting sometimes because they worry about the effect it will have on the adult's life if they're wrong. And what I always say is, 'Okay, let's say you're right and you don't report it - what are you doing to that child's life?' A really great day at Mission Kids is when everyone on the team weighs in on a case and agrees there was no child abuse. That's a great outcome. There's no reason to be afraid of reporting, but there's reason to be afraid of not reporting.

​​What about states that don't have organizations like Mission Kids that offer this team approach to cases?

The anger fuels me, and I don't know if that's a complimentary thing to say about myself or not.

I think it is. Anger is a very valuable emotion, and I think your work is a productive way to use it.

And do you think you're making a difference?

I do. Every day, I think I do. When we started Mission Kids, the estimates from people in the field were that we would be seeing 250 to 300 children in a year. We smashed through that after year two or three and now see double that amount on a regular basis. So, those are 600 children that would have been abused, but there would have been no help.

Your website cites data from Polaris showing that there are more than 9,000 illicit massage businesses in the U.S. That's a staggering number. Why do you think this problem still looms so large?

I think there is a bigger question here. Why are we okay as a society with the fact that men frequent these illicit massage parlors to keep them in business? As a society, how are we still okay with the concept that, ‘boys will be boys,’ that it's okay to purchase sex? I think that those are much bigger questions that we need to ask ourselves. If it wasn't okay, it wouldn't happen. No demand, no supply.

Mission Kids' team investigation approach insulates children from reliving the horrors of multiple interviews. Tell me a little bit about the forensic interviewers and their training.

We expect our forensic interviewers to have a college education, preferably with master's degree, and to have experience working with children. We then send them to national training in Huntsville, Alabama, which is where the group CAC was developed, for a very intensive, week-long training. They learn a lot about child development issues - for example, how long of an attention span should a four-year-old have compared to a fourteen-year-old. They also learn how to ask open-ended, non-leading, developmentally appropriate questions so a child will tell their story in their own words. They learn how to follow the child's lead.

Mission Kids offers "Darkness to Light" child abuse education and prevention training for adults to raise awareness and protect our children. Does this receive strong community interest and participation, and do you think it's making a difference?

I think there has been more interest recently, and we're happy with that because it's a great program that helps people understand how abuse can happen. If we take internet crime out of the equation for the moment - ninety percent of the time, the child knows his abuser, and fifty percent of the time, it's a family member. Darkness to Light is a two and a half-hour program using videos and discussion that makes people understand how this can happen. Abusers not only manipulate the child; they also manipulate the community and the children's' families. These cases can happen anywhere you have people in a position of power who are integrated into the community, but they are often swept under the rug.

What do you think is the best prevention against child abuse?

I think this is the best prevention: magazine articles, radio interviews, television shows and movies that destigmatize it and start a conversation.

I've been married for almost thirty-five years now, so I find sanctuary in my family. My husband and three adult daughters are amazing. I love to exercise, ride my bicycle, do yoga, and I love nature. When I come home after a bad day, the elliptical gets a really good workout.
Mission Kids CAC Website
Donate
Follow Mission Kids Child Advocacy Center on Social media: