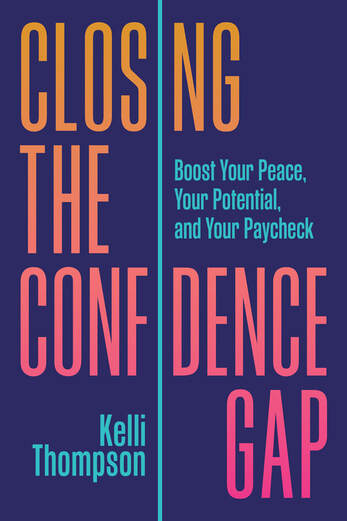 Your Work “Flaws” Might Be Your Greatest Strength, Here’s Why
Amended book excerpt from Closing the Confidence Gap
​There is an old bus that sits on our family farm in the middle of southwestern Nebraska. It’s been parked in tall golden grass next to a large tree for the last three decades. In its prime, it was periwinkle blue on the bottom and white on top, but now, rust has taken over, adding a dose of bronzing that crawls across the sides.

It reminds me of my great-grandma Elizabeth every time I see it. In the 1960s, she bought this bus so she could pick up and house a seasonal harvest crew for her one-thousand-acre farm and ranch. In the 1960s, women just didn’t buy buses and run farms — they couldn’t even borrow money without a male relative’s cosign until 1974 — but she did just that while her husband worked days and nights away on the railroad; she continued to do so even after her husband passed when she was only sixty years old.

Elizabeth landed her first job as a teenager working in her parents’ hardware store. She learned how to negotiate, not just with vendors but with customers. She attended college around 1915, equally as unusual for a young woman. She made it through the Great Depression by relentlessly saving money. In the late 1940s, with this money saved, she made a large cash down payment on the family farm, and she, with her husband’s co-sign, borrowed the rest of the money to fund it. When she was widowed in 1960, it meant she had to pay with cash for everything from farm supplies to the bus — the bank wouldn’t give her a loan as a single woman.

While she was small in stature at four-foot-eleven, her reputation was big.

People called her shrewd, intimidating, confrontational, bossy, a bitch. According to society at the time, there was a long list of things “wrong” with her simply because she was a woman. She wasn’t concerned with conformity or making you feel comfortable.

She didn’t back down; however, Elizabeth was respected, because over time she forged relationships built on fairness and trust.

Upon her death, she’d built a thriving farming business despite the inability to borrow money. When they went through her safe-deposit box after her death in 1981, they found $300,000 in cash rolled up inside — all those pennies pinched and saved, meant to be an inheritance for her two daughters.

I imagine today she could tell us many stories about things she did because she didn’t listen to the cultural messages of “women shouldn’t do that.” I’m certain that if someone told her she couldn’t do it, she likely would have done just that plus 20 percent more. I know so many women who are bold and ready leaders, just like her, who have no problem turning chaos into grand, creative outcomes. These same women are often told they are aggressive, bossy, or too direct and experience liability bias in the workplace.

She did not conform to gender stereotypes then, and still would not today. Have you ever been told you are too _____   ?

Even women who may fit more traditional gender norms, and might find themselves the opposite of Elizabeth, still struggle with being labeled as too emotional, sensitive, or people pleasing.

But what if your “flaws” are actually your greatest gift? Because my great-grandma was bold, shrewd, and assertive, she created a farm and business that employed workers and created growth and needed services in her community.

How to reframe your “flaws” into gifts:

1. Notice it
Where might you be self-censoring or holding back so you don’t show up a certain way?

2. Own it
What have I always been told about my personality while growing up or in a professional environment? Examples: “You’re too sensitive . . . You’re too bossy . . . ”

4. Act on it
List examples, personal and professional, of when your unique quirks have created a successful outcome. Why did your approach make the difference? How can you transfer this into a current situation? How will you stop hiding behind your unique gifts and show up to use them today?

To boost your peace, your potential, and your paycheck, it’s time to stop hiding behind your unique qualities and use them for impact.