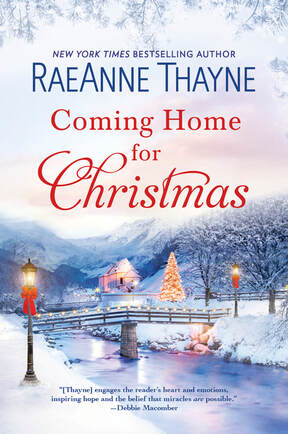 After all these years, he was here, standing on the porch of Brambleberry House.

She couldn’t quite believe this was really happening. Her day had started out so normally. She took her dozen different medications, meditated, went through the routine of exercises she used to keep her battered body from seizing up. She had gone to the greenhouse for a few hours. Her hands still smelled like the pine branches she had woven together for evergreen wreaths.

All in all, it had been a routine day. She never expected that before the day was out, she would be here talking to her husband, the man she had loved since she was eighteen years old.

She had imagined this day so many times, had dreamed of the chance to see him again, to explain the choices she had made and the terrible consequences that had resulted from those choices.

Now that he was here, she felt tongue-tied, constrained by all the years and miles and choices between them.

What could she say? No words would ever make up for what she had done.

Of course she couldn’t go with him. She had a job here. She worked at the garden center and was busy this time of year selling Christmas trees and wreaths, working on floral arrangements, planning ahead for the growing season.

She was also responsible for the gardens here at Brambleberry House—though admittedly, that wasn’t a very good excuse this time of year. She had already supervised the Christmas decorating in the garden and wouldn’t have anything to do until spring began its slow return to this part of the Oregon Coast.

Returning to Haven Point didn’t terrify her. As he pointed out, she had been back a dozen times over the last several years.

It was the idea of returning to Haven Point with Lucas Hamilton that made her blood run cold.

Her stomach twisted into knots. He wanted her to drive there with him. It was eight hours from here. Eight hours in a car with a man who had every reason to despise her. She couldn’t possibly do it.

But what choice did she have? If she could believe him - and she had no reason to think he was lying, as he had always been honest with her - she had to return to Haven Point or he would be arrested. She couldn’t let that happen. She had already put him and their children through so very much.

She owed him. This was the least she could do.

Accused of her murder! How was that even possible? Luke had never raised a hand to her, and she hated that there were apparently people in Lake Haven County who didn’t know him well enough to understand that.

“Hurry up.” Her husband’s voice was resolute. “You can take your return flight once we’re done with the legalities or you can rent a car in Boise and drive back.”

She wished that were possible, but the simple act of driving a vehicle was one of the abilities she had lost.

Wild tendrils of panic made her palms sweat and her stomach roll. She wanted to go back to her second-floor apartment and curl up in her bed with the covers over her head.

“I...I need time to make arrangements.” She tried one more time. “I can’t just leave town without a word.”

His raised eyebrow made her all too aware of the irony of what she just said. That was exactly what she had done seven years ago when she had walked away from him and their children and the life she had destroyed.

“One hour. You have one hour and then I’m coming to get you, wherever you are. You’re going back to Haven Point, even if I have to tie you up and toss you into the bed of my pickup. Don’t think I won’t.”

He was so cold, hard as tungsten. This version of Lucas Hamilton was very different from the one who had been all sweet tenderness during their dating years and the first glorious months of their marriage.

She had created this version. She had forced the joy out of him, not only because she left but during those troubled years in between.

It was time to make things right. She had to do her best to fix what she had destroyed.

“All right,” she finally said, trying hard to keep the trembling out of her voice. “I can be ready in one hour. What will you do in that time? Do you...? Do you want to come in?”

She did not want him in her home, her sanctuary. Brambleberry House had become her refuge over the past few years. She wouldn’t say she had completely healed here, but this was at least where she had started the process.

“There are several nice...restaurants in town, if you need to grab a...bite to eat.”

Did he notice the way she stammered now, the awkward pauses she hated? Of all the things she had lost, tangible and intangible, fluent speech was one of the gifts she missed the most. She hated scrambling around for words, having them right there on the tip of her tongue but not being able to find them.

“I have a sandwich in the truck. I’ll eat there. To be honest, Elizabeth, I don’t want to leave this spot. If I go anywhere, who knows if you would still be here when I come back?”

She nodded, hating his contempt but knowing that she deserved every bit of it. “I’ll...try to be quick.”

Her hands were shaking. Everything was shaking. She felt nauseous, and her head hurt. Oh, sweet heaven. She did not want to have a seizure today. They were mostly controlled these days but tended to sneak up on her when her reserves were low.

She slipped back into the house. As she had expected, Rosa was waiting inside the entryway, along with Melissa Fielding, the tenant of the first-floor apartment.

“What is going on?” the nurse asked, eyes filled with worry. “Rosa tells me that man says he is your husband and that your name is not Sonia Davis but Elizabeth something-or-other.”

She sighed. “Rosa is right. Both of those things are...true. I’m...I’m sorry I didn’t tell you. It is a very long and painful story. A past I...thought I had put behind me.”

It was a lie. She hadn’t put the past behind her. She lived with it every single day, haunting her every waking moment. Luke. Cassie. Bridger. They were etched on her heart.

The only bright spot about Luke bursting back into her life was the possibility that she might see her children beyond random glimpses from a distance. She might be able to talk to them. Hug them. Perhaps try to explain, if she could find the words.

“What does he want?” Melissa trailed after her up the stairs, Rosa behind her.

“He wants to...take me back to the place where I lived with...with him. Haven Point, Idaho.”

“I hope you told him no way in hell,” Melissa said. “You don’t need to go anywhere with him. He might be your husband, but that doesn’t make him your lord and master. He can’t just show up out of the blue and drag you off like some caveman.”

She paused outside her apartment door, desperate to be alone - to breathe, to think, to recover - but also well aware she needed to convince her friends not to call local law enforcement on her behalf. They were so concerned about her, she wouldn’t put it past either of them.