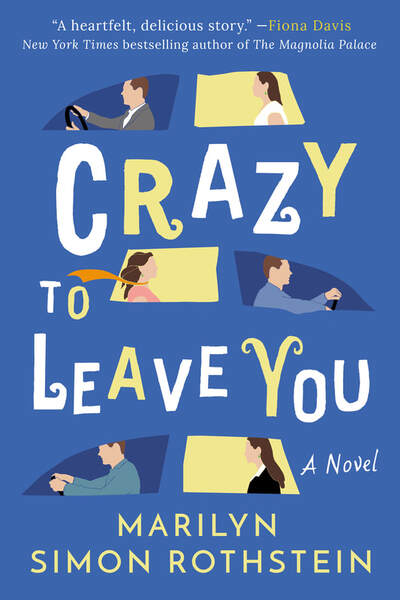 Diets consumed me. I was either on my way up or on my way down the scale. I called my family with news of my engagement and launched my prewedding diet plan. It was a Saturday. I had never kicked off a diet on any day but a Monday. I had never started one in the middle of a day. Early that morning, Eric David Farkas had gotten down on his khaki-clad knee and asked me to marry him. At the time, we were floating—buoyant in a red-and-white hot-air balloon. We sipped champagne from real crystal glasses. We ate strawberries dipped in white chocolate. We marveled at the world below. Everything that happened in the hot-air balloon was more romantic than I had dared to dream. And I had done a lot of dreaming. I held a record among my friends I could have done without—I was the last to marry.

Upon descent, I was flabbergasted to find Eric’s parents, Myrna and Short Stanley, on the ground, gunning to take over, specifically with the wedding. My future mother-in-law was a retired event planner. No one mentioned she was a dictator. I had ideas about the big day—the venue, the music, the menu, the time of year. However, Eric acquiesced to Myrna, whose idea of an informal gathering was the annual fashion gala attended by A-list celebrities at the Metropolitan Museum of Art.

The wedding had to happen at Temple Sons of Abraham, their longtime place of worship, scene of Eric’s over-the-top bar mitzvah and his parents’ wedding during the Reagan years. Myrna had contacted the synagogue already. There had been a cancellation. We could hold our wedding on a Sunday in March, dreariest month of the year. Forget the month, Lauren, and the venue. Get married and start living your life.

From then on, I dieted, surviving on four organic egg whites for breakfast, green salad—no dressing—for lunch. Dinnertime, I grilled a six-ounce fillet of salmon—illegally on my tiny terrace overlooking a schoolyard in Manhattan. I searched five states for six months looking for the perfect wedding gown. I was so full of pride to finally fit into a size 12, I would’ve worn the tag down the aisle instead of the actual dress.

On my wedding day, I waited, breathless, in the bridal quarters at Temple Sons of Abraham. I was euphoric, buzzing in my dazzling wedding gown, a backless A-line with long, tapered sleeves. I am five eight and chose silver high heels. I preferred a natural look—a touch of makeup on my fair skin, neutral shadow, and a bit of mascara on my brown eyes, beach waves of long chestnut hair.

My bridesmaids were with me—in teal. Teal was the color of the season. Everything was teal.

I hugged my gift. “Well, it’s something blue. Now I must hope it’s not borrowed.”

“I swear you haven’t changed since sleepaway camp.”

Camp was where I had first met Eric. I had even made out with him behind Bunk 8 when we were thirteen. We didn’t date until I was thirty-nine years old and bumped into him at the annual reunion. I had no desire to attend the event, but I had been persuaded by Kate, relentless Kate. At the opening reception, in the great barn converted to a recreation hall, I was happy to spot Eric, more handsome than I remembered.

Eric had approached with an impish grin. He asked whether I would enjoy a drink. I said no, because I didn’t want him to veer to the bar on the far side of the congested room and be hijacked by another single woman who also noticed Eric had become attractive with age.

“Do you remember me?” he asked, as though I should.
​
Yes, I thought. How could I forget? You were my first kiss. I was thirteen. I raced back to my bunk to tell Kate all about it.

He smiled mischievously. Then he confessed, “That was my first kiss.”

We grinned at each other. I liked grinning at him, enjoyed flirting with him.

When Eric was thirty, he had invented an innovative way to scan groceries. He sold the patent, spending a portion of his nest egg to launch Eric’s Famous—his small-batch mayonnaise company.

Before rediscovering Eric, I never thought about mayonnaise—except when chopping Bumble Bee Tuna, for which I opened Hellmann’s, which was what my mother used, but only for my father, because my mother thought mayonnaise was the work of the devil and ate tuna dry. Eric loved mayonnaise. On our third date, we toured his headquarters, an old loft he said he was fortunate to buy for less than a song, a hum. A couple, faded jeans, white T-shirts, passed us on the street, their twins asleep in a double stroller. Mom sipped iced tea. Dad commandeered the stroller.

Eric said, “Lauren, tell me. Would you push the kids, or would I?”

Who asks that on a third date? A third-date question would be “Travel much?”

That night, I called Kate in Chicago. “I’m going to marry Eric.”