Interview with
Blythe Hill
Founder & CEO of the Dressember Foundation 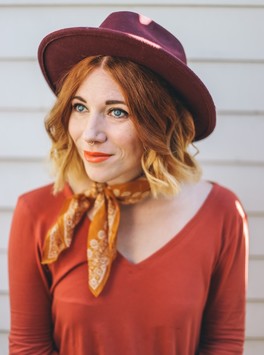 Blythe Hill is CEO and founder of the Dressember Foundation, a non-profit organization which raises awareness and holds an annual worldwide campaign to aid in the fight against human sex trafficking. Blythe was determined to try to help victims of the human slave trade after hearing about this underground criminal world during her college years. She graduated with a bachelor’s degree from California State University, Fullerton and continued her education there, receiving a master’s degree in English in 2011. She has worked as a writer, editor and photographer in both the publishing industry and the fashion industry before becoming the full-time CEO of Dressember. Each December, Dressember’s global campaign is symbolized by women wearing dresses throughout the month in solidarity and support of the victims of the human sex trafficking trade. (Please note that men can also participate.) The effort is intended to raise awareness and funding as well as to advocate for the dignity of all people. Dressember is a grantmaking foundation which collaborates with other organizations to educate the public and to help rescued victims reclaim their lives. The organization has raised over three million dollars since 2013.

Click HERE if you would like to help raise money for this year’s campaign.
Myrna Beth Haskell, managing editor, spoke with Blythe about her personal story, how Dressember has grown in the last several years and her plans for the foundation’s future.

I’ve read that trafficking women and children for sexual exploitation is the fastest growing criminal enterprise in the world. However, it is not something that is readily talked about. What made you interested in advocating for victims of the human sex trafficking trade?
How did wearing a dress become the symbol for Dressember?

In 2009, I actually started wearing a dress every day as a personal style challenge. There was no cause or fundraising behind it. First some of my friends joined in, and then it became something bigger. Surprisingly, it caught on like wildfire. In 2013, I aligned Dressember with anti-trafficking. My desire to help victims of the human slave trade was something I was compelled to do, but I hadn’t figured out how to go about making a difference. Then, it all just fell into place for me. The dress is a charged symbol for people. It’s often perceived as a garment expressing femininity, but we’ve reclaimed the dress as a symbol of freedom and power. It became the unifier of our movement.
Since this started as a personal challenge and became a global movement, could you tell me a bit about the transformation? What kind of assistance did you get in creating the non-profit and was there anything overwhelming about the process?
What are some of the hurdles and obstacles you’ve experienced in this journey?

Human sex trafficking is against the law, but it is not enforced in every country. It’s a crime that affects the poorest people in society. There is a lot of corruption. In some instances, the wealthy perpetrators can pay off the police. Also, a lot of testimony and physical evidence can take years to get to the courts, especially in developing countries.

What groups and organizations do you work with?

We are a grantmaking foundation. We collaborate and develop partnerships with other organizations which are committed to fighting human trafficking and bringing perpetrators to justice. One example is the International Justice Mission, a global organization that protects the poor from violence in the developing world. We work with many other organizations as well. The organizations we work with focus on varied areas of need, such as rescuing victims, training law enforcement officials, holding slave owners accountable, providing safe housing for victims, job training for victims, etc.
Have you personally met any survivors – those who have escaped the slave trade and have reclaimed their dignity and their lives? What is it about their personal stories that motivates you to move forward?

The day-to-day tasks of running a foundation are not glamorous. Much of what I do entails working out grant processes and similar mundane tasks. However, I visit at least one field office per year, and this brings me back to why I am doing what I’m doing. I’ve been to the offices that handle Greece and Bulgaria and the Dominican Republic and Guatemala. It is sobering to hear victims’ stories. You have to remember that I’m meeting them on the other side of their story- they’ve usually already received trauma therapy or might have seen their perpetrator receive some sort of justice. It’s just mind-boggling…hearing what they’ve gone through…and it drives a desire to do more. It re-energizes me.

What are your future plans for Dressember?

In 2018, we are opening the grant process to more U.S. based organizations. We are hoping to gain 30 more organizations to apply as partnership advocates. We know that these organizations will be onboard if they realize they are helping people in their local community.

**Note: In November 2017, the McMahon/Ryan Child Advocacy Center, based in Syracuse, New York, became a grant partner of the Dressember Foundation. This non-profit organization has been serving its local community since doors opened in 2002. They’ve advocated for upwards of 700 abuse victims each year, specifically children.
PLEASE NOTE:

In 2016, a report from the United Nations Office on Drugs and Crime (UNODC), stated, “The vast majority of all human trafficking victims – some 71 per cent – are women and girls and one third are children. Most countries have passed legislation that criminalizes trafficking in persons as a specific offence; many have done so recently.” However, the Global Report shows that there is a relation between how long a country has had proper trafficking legislation on its books, and how many convictions it reports. Countries with longer-standing legislation records, on average, have more convictions. That said, the overall criminal justice response to trafficking in persons, which has historically been very weak, has not improved significantly.