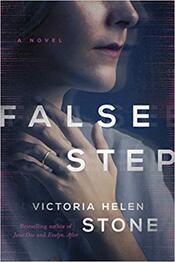 The man jogged through the parking area of a mountain trailhead, his blond hair wild and disheveled, a dead leaf caught in the golden waves. The small body in his arms bounced with each step. A young child, two or three years old, limbs disturbingly limp. It was difficult to tell much more past the jittery movement of the camera and the shadows of pine trees cutting lines of darkness across the scene.

“He’s okay,” the man said to the cars he passed, then again and again as a couple of other people stepped into view. “He’s okay, he’s okay.”

Tears streamed down his face, but the boy’s face was hidden, turned away. Impossible to tell from the video whether he was awake or asleep or alive. His legs hung down in dirty sweatpants. His hands were lost in the sleeves of his stained gray hoodie.

A black dog barked excitedly, running forward and back, sniffing at the child’s shoes.

“I found him!” the man yelled. Then the video, shot on someone’s smartphone, froze and ended.

Veronica nodded in silent shock. That was definitely her husband on the video. She checked her phone again to see whether he’d texted or called, but the screen showed no recent activity. She texted three question marks to him. Caitlyn grabbed Veronica’s arm and held tight as if they were close friends, though they weren’t. They were only coworkers. Associates, actually. Veronica was an occupational therapist and Caitlyn worked in physical therapy, and they used the same rehab facility for their more mobile patients. It was good to get clients out of the house when possible.

She’d never thought Caitlyn liked her much. But everyone liked Johnny. Caitlyn had only met him once, but she’d recognized him on the news just fine. He had that effect on women, and on plenty of men too.

“I’m sorry,” Veronica murmured to her patient, but the elderly woman waved her off.

“Are you kidding?” Mrs. Lee exclaimed. “This is the most exciting thing to happen to me since I thought Miles Probst was having a heart attack in my bed.” The woman pointed at the muted TV in the corner of the therapy room, and Veronica looked up to see her husband again, trotting behind cars, his face a grimace of fear and relief.

Tanner Holcomb had gone missing four days before. A three-year-old boy lost in the mountains outside Denver. The temperature had been 50 degrees that first night. Survivable. But it had dropped to 38 the second. The entire city had watched and waited and sent hordes of volunteers into the foothills.

The boy had worn only sweatpants and a hoodie when he’d wandered off. Icy streams snaked through the rocky terrain. Mountain lions prowled for prey. By the third night no one held out much hope that he’d be found alive. He might not be found at all. Anything could happen to a body in these hills. A slip in a stream and a small child could be swept along and wedged beneath a boulder until nothing was left of him to find. Or those mountain lions again. They didn’t leave meals behind.

A tragedy. His family should have kept better track of him. This was what happened when you let children explore too far on their own. A three-year-old, no less!

But now there he was.

The news shot switched to a live view of a narrow road overhung with lodgepole pines. The swirling lights of police cars flashed against the green. A button-nosed reporter gestured somewhere to her left, but the police had cordoned off the area, and the cameras couldn’t get closer. More trees filled the screen. More lights. The producer ran the footage of Johnny again.

Veronica felt frozen, her hands and feet going numb. Johnny--her Johnny, for better or worse—had found little Tanner Holcomb and would return him to his family. Johnny hadn’t even been part of the search. He’d just gone out for one of his normal hikes, same as he did once or twice every week when there wasn’t snow on the ground.

But why? Veronica wasn’t sure. She just knew that her body was shifting from cold to hot, and she could feel a dozen eyes on her face.

Mrs. Lee made a shooing motion. “Go to your husband. I can do these stupid exercises without you.”

A common insult Veronica had long ago learned to ignore. Her job was to help people regain remedial skills, and very few clients were thrilled to have that opportunity. Still, her career was one of the few pieces of her life that felt just right. The rest of the puzzle no longer fit back together, the pieces bent or swollen out of shape.

She swallowed hard and swung around to leave.

This video of her husband was good news. The best possible news. This was amazing.
Sweat prickled her hairline.

She’d gathered her things and was nearly to the car when her cell finally rang. The cheerful jangle she’d chosen as a ring tone seemed insensitive and stupid now. She juggled her bags and yanked the phone from her pocket. “Johnny?” she said in a gasp.

“Veronica! Oh my God, I found him! I found that kid!” His first words had been exuberant, but his voice broke at the end as if splitting open with suppressed pain.

Tears filled her eyes. They seemed to fill her whole head, pressing from the inside and clogging her up. “I saw it on the news,” she choked out. “Is he okay?”

Johnny heaved a breath, and when he exhaled it sounded like a sob of laughter. “He’s cold and dehydrated. But they think that’s it.”

“Really. They think he’s going to be all right.”

“Jesus. How did he even survive? This is just crazy, Johnny.”

“I know!” This time he really did laugh. “I was ... I was hiking Flat Rock Trail. You know the one? A mile o the highway near Kittredge?”

She didn’t know the one and he couldn’t see her, but she nodded anyway.

“Old Man started going crazy, barking and running ahead.” Their black Lab had been born with white whiskers around his muzzle that made him look elderly even as a puppy. Whatever name they’d initially chosen had been forgotten in their first few days of ownership. And now he was a hero.

“I’d never have found Tanner without him.”

“I’ll buy some marrow bones on the way home.”

“You did,” she corrected, happy to stroke his needy ego for once. “You did that.”