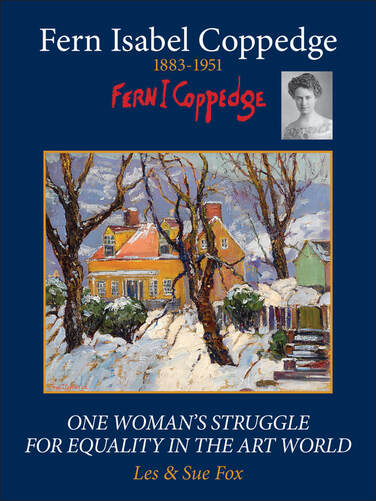 Some say there is no such thing as a coincidence. However, in our opinion Fern Coppedge's life and career path were guided by many wonderful coincidences. In 1902, at age 19, Fern's sister Effa introduced her to a handsome young science teacher.  Two years later, they were married. Our book contains their January 2, 1904 Marriage Certificate and a photo of Fern's diamond engagement ring.

When Robert suggested to his fiancé that she should drop out of the University of Kansas where she was studying to be a teacher, he offered her the opportunity to sit in on an art class in Topeka High School. The new art teacher, Iris Andrews, happened to be a student of William Merritt Chase, one of the finest American Impressionists and the foremost art instructor in America. Five years later Fern would become one of Chase's students at the Art Students League in New York.  Robert remained her lifetime companion, her best friend and her most ardent backer, stretching his modest salary as a teacher to help her get an art education.

Despite her skill as an artist and the encouragement of her art teacher and family, Fern would not find it easy to negotiate her way through the maze of challenges standing between her and the artistic ambition.  Not the least of these challenges was the unfair treatment of female artists by the male establishment that dominated, and still dominates the art world in 2022.  Women artists were often told to stop fooling around, get married, raise a family and be a good little wife. At art shows, their work was displayed in back rooms while lesser quality men artists were accorded places of prominence. Like other great women artists, from Mary Cassatt to Georgie O'Keefee, Fern refused to play by the rules.  She showed her paintings locally, joined art clubs, and attended three major art schools in Chicago, New York and Philadelphia, constantly striving for recognition.  Eventually, the art world was forced to acknowledge this exceptional, prize-winning artist, whom many consider one of the finest winter landscape artists in American Art.

Her efforts culminated in a life-changing event in 1916 when she was singled out at Wanamakers' annual student art exhibition in Philadelphia.  A painting of Gloucester Harbor appeared in International Studio Magazine, chosen from 650 entries. Within four years, she and her husband had moved to Pennsylvania, he to his own house in Philadelphia, she to her house in Lumberville, not far from New Hope where she would spend the rest of her life.  The couple shared their homes and lives for 44 years until Robert died in 1948. Our book includes the first ever biography of Robert W. Coppedge, an amateur artist who proudly proclaimed that his wife's art talent far exceeded his.

Coppedge struggled to support herself and eventually designed and built her dream home, Boxwood, on a cliff overlooking the Delaware River in 1929. At the same time she also assisted her family financially and was a devoted church member as well as a staunch supporter of aspiring women artists.  In 1922, she joined a group of world class women artists known as The Philadelphia Ten, who exhibited independently of men until 1945 and were able to earn a good living without pandering to the demands of the so-called "superior" sex. In 1922, Fern helped organize "Art Week" in Philadelphia with 26 members of the Pennsylvania Academy of Fine Artists (PAFA), the first art school and art museum in America.

Included in Fern Coppedge: One Woman's Struggle For Equality is a Catalogue Raisonne illustrating more than 400 authenticated paintings of snow scenes, harbor scenes and seasonal landscapes. Two of these paintings have been featured on Antiques Roadshow, one valued at over $150,000. This book also contains family biographies plus dozens of great stories related to the most fascinating member of The New Hope School of American Impressionism whose heyday lasted from 1920 to 1940. Except for Fern, all the members of The New Hope School were men.