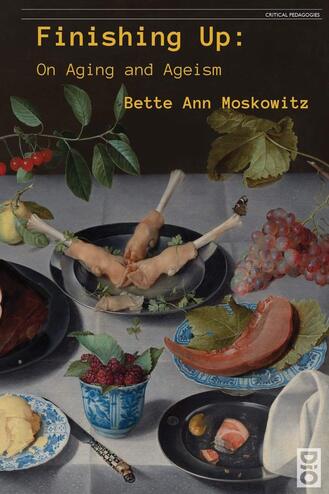 From the chapter: In and Out of the Cultural Cage

It is four in the afternoon and two little old ladies walk into a bar.

They are all dressed up in the old style, nice ladies’ hats, gloves, sensible shoes.

“Aren’t they cute?” Tina, the bartender, says to Harry, her boss.

Harry shrugs and then flashes the ladies a smile and even though the place is empty, he shows them to a dark corner table in the back.

“They’re bad for business,” he explains to Tina when he comes back. “People don’t want to see senior citizens when they go out for a drink and a good time. It kills the buzz. Next thing you know we’ll be having Early Birds instead of Happy Hour.”

Harry brings them menus. The light is dim and Woman#1, a plump dumpling, let’s call her Tessie, takes out her reading glasses and holds the menu so close to her face it touches her nose. Woman #2, a peroxide blonde named Babe, also struggles. “The print is so small,” she says, as they continue to try to read the menu.

To hurry them along, Harry approaches the table.

“What can I get you girls?” he says. “Feeling dangerous? How about something alcoholic to start? A nice Chardonnay? Then maybe you’d like to try our crabmeat salad.”

Tessie says she will have a bourbon neat with water on the side. Babe wants a dry martini up, two olives. And they want a large order of fries to share.

Harry brings them half a carafe of the Chardonnay because he wasn’t listening or thinks they were kidding, referring to what they would have ordered (when they weren’t old with ruined stomachs) or maybe because if they were his mom, he would not want her drinking the hard stuff in the middle of the day.

Tessie, who is in her mid-eighties, looks at the wine and thinks to herself, “I must have forgotten. I thought I ordered bourbon. Maybe I’m losing it.”

Babe, who is seventy-three and a baby boomer says, “What the hell! I didn’t order this.”

Both of them drink the wine rather than making any further fuss.

Harry’s ageism is obvious. He hides the women in the back of the bar, afraid their presence will affect his bottom line. As Harry sees it, old people will make his younger customers uncomfortable. Their oldness is unsightly. Though, if you asked him he would say he LOVES old people and that he is just being realistic. The presence of “senior citizens” will ruin his Happy Hour (which is to bar patrons roughly what Early Bird is to diner patrons). He calls the women “girls” – but he would deny he means anything insulting. He had no intention of demoting them from full-fledged womanhood. He helps them select what they want to eat, making the assumption they need or want his help. He bases his choices for them on the stereotype of what old ladies who lunch lunch on, and despite what they actually order, he believes he knows what is good for them. He brings them what he thinks they should have.

Tina, that woke twenty-six year old bartender (who is thoroughly up-to-date on the dangers of sexism) cheerfully refers to the two women as “cute,” not aware that she would say the same about a child or a cuddly toy. Tina thinks her grandmother is cute, too; she does not discuss serious issues, such as sexism with her, because she thinks Grandma doesn’t get it. And when Grandma tells Tina she “burned her bra” Tina thinks it happened while Grandma was ironing underwear, not because she was an early feminist.

But what about Tessie and Babe? When Harry brings the wrong drink, Tessie immediately assumes that she is at fault, that her memory is failing. She waits every day for her memory to fail, not based on anything in her head as much as in what she has always been taught is going to happen. And while Babe’s reaction was a lot more blunt, she just thinks Harry made a mistake and leaves it at that. And where was she when Harry led them to the back of the bar? Where was that baby-boomer feistiness of old? Or did she want to be hidden because she is vaguely aware she is going against form to be a little old lady in a bar in the middle of the afternoon? It is not the right image at her age, and her children might disapprove.

Neither of the women objects to Harry calling them girls because they are used to it and have accepted it as the more benign instance of patronizing they believe comes with the territory of being an older person.

And the author of the story: What kind of set-up was it to describe them as she did, as “little old ladies” and “dumplings” with sensible shoes?

None of these people: not Harry, not Tina, not even Tessie and Babe are aware that their thoughts, actions and speech are ageist.

The only one who knows it is me, because I put them there, penned in by habit and secure that I know exactly how they are going to feel, think and act.

Welcome to the Cultural Cage

I invented the phrase so we could picture it: wide and tall, with bars, mostly invisible, encompassing us all.

The world is a going concern when we come into it. I mean the whole world and our own personal world. In both, there are ways of doing things that are expected and accepted, considered correct, or not even thought about twice.

For instance, think about how we are reared: all the small choices our parents make, whether we are breast fed or bottle fed, spanked or spoiled, what we consider right and wrong, polite and impolite, or just not done.  That’s our culture. We rarely question it, or even notice it.  It’s what we know.

Women’s suffrage was not an idea anyone had until someone had it.

A good whipping was the best way to teach a child to behave until it wasn’t.

Homosexuality was cause for arrest or worse and still is in some parts of the world. In America, the bars of that particular cage are almost obliterated.

Most of us live entirely within those cultural givens, especially the long-standing ones, and living within them means we do not easily see another way. As the millennial saying goes, “It is what it is.” (At least until some visionary sees another way.)

So, if you were born when breast feeding waned and formula became the way to nourish infants (because it was the more “modern” way, and signaled status and refinement), chances are you were a bottle baby. And if you were born when it changed again (when studies said breast milk had health benefits for babies), you were probably breast fed. In either case, your parents did what was expected of them, what the “right” way was thought to be at that time.

When it comes to aging in America, the “bars” of the cultural cage are particularly strong, made of ancient beliefs brought from other cultures, reinforced by generations and generalizations. One of the oldest of these generalizations, that elders are wise and givers of wisdom, hangs on despite being complicated by the biases in our own youth/beauty/success-oriented culture, and by increased longevity. And, to stack complication upon complication, the American habit of self-awareness forces us into a constant contradiction: while we say we venerate our elders (the politically correct pose we want to see when we look in the mirror), we undermine what we say by what we do every day in very real ways.