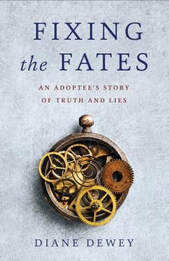 It was an early morning during that visit to Germany in summer 1972 that I stood in the open-air market in Stuttgart. Grandmother Elsa and Tanta Anna had gone off in pursuit of charcuterie, so I had a look around. The pavement was wet from showers, and dampened, glistening crates of fruits warped. I felt a curious creep- ing on my skin, and not from the chill. Feeling anonymous amid the screaming colors - yellow, red, and green bell peppers, striped awnings on the vendors’ stands, jars full of zinnias - I stopped. It seemed as if my natural mother might be here.

This was her city, after all. Stuttgart was where I was born. It was a Friday morning in August, when townspeople swarmed in from every side street to shop in the main square. At 8:30 a.m., the clock struck auspiciously, the earlier the better for freshness and for making an appearance among neighbors. Shopping itself was like nourishment. Placing live goods in my bag, I felt their coolness and weight. I breathed in the scent of cantaloupe and herbs and nestled the sack under my shoulder. But there was something else.

I felt her presence. How could that be? I’d been born seventeen years earlier, almost to the day. Would she look like me? Probably not after all these years, I told myself, though I continued to peer around the corners. Would she recognize me even if I stared her straight in the face? If I heard her voice or her laugh, would I know the sound of it? Her potential recognition and acknowledgment of me might be two different things. What if she recoiled? What if I did?

I suddenly recalled a sign along my jogging trail at home: IF YOU FEEL SOMETHING STRANGE, WALK AWAY. Rooted in that square, I couldn’t leave. Although I browsed the produce methodically, I was looking for something else.

Bells rang out insistently from the surrounding churches as the clock struck nine. My thoughts wouldn’t recede, hammered upon by the clamoring bells. Every knell seemed like an avowal that urged me on. Or maybe it was a final toll: No. You’ll never find her.

What I couldn’t know for sure then, and what I would learn many years later, was that Helena Bachmeier was in Stuttgart the summer I visited. She was looking for me. Helena always went to the open-air farmers’ market on Friday mornings when she visited Stuttgart, to find fresh vegetables and experience the sights and scents. Helena would have been thirty-seven years old that summer when I was seventeen and stood there, sensing her. I was around that age when I’d received the copy of my birth certificate revealing first clues about Helena from my German cousin Dieter, who had lived not far away from this spot.

Anyone who studies genetic patterns can see how startling this experience was. You have an occurrence at the same time of life as your mother or father or ancestor. It’s as if you are spring-loaded and merely unwinding your existence, replicating what’s gone before. I’d come to know Monica McGoldrick’s writing that traces these patterns based on collective memory and, more specifically, genetic memory. When Helena was nineteen years old, she got pregnant with me and basically split with her family. I refused to end my relationship with a shunned boyfriend after I returned from my visit to Germany and, by age nineteen, was disowned by my family. The causes were different, but the experience of being arbitrarily separated was the same.

Bert listened to it all: the coincidences, the near misses, and the agony. Maybe in some recess of him—where he was still raw with grief from his wife’s passing - he felt empathy or a need to save me or both, and, in so doing, save himself. He seemed to pledge himself to help me get at my roots, and more. The simple validation Bert provided boosted my incentive to get more honest about my choices.

As much as I stayed away from emotionally binding ties, I tried to understand them through books, like having failed an exam and preparing harder for the next one. Through Nancy Newton Verrier’s The Primal Wound, I learned about preconscious grief and unexpressed mourning and how it gets pushed into subterranean territory. It affects attention span and emotional regulation and can produce manic highs and lows. Of these, there were plenty of indicators: for years, I had torn through credit card limits. I reasoned that I needed these things to fashion myself into the person I wanted to be. Filling those compulsions invigorated me with a sense of triumph. But were they sustainable?
​
Although I edited my narrative to Bert over time, reserving chunks for the sake of privacy, I had already let him into my life with unprecedented candor. Little did I know it would take decades of Bert’s rapt listening, his decency and patience to narrow my mood swings. Now, more often than not, these extreme arcs just float by instead of claiming my power.