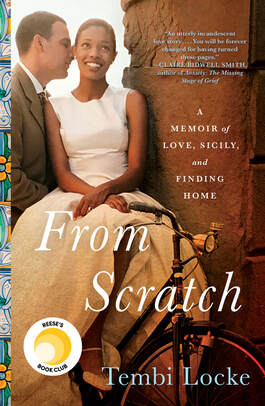 In Sicily, every story begins with a marriage or a death. In my case, it’s both. And so it was that I found myself driving a rusted Fiat through a winding country road on the outskirts of Aliminusa, a small Sicilian village, with my husband’s ashes in a small wooden box tucked between my legs. I was about to break into an olive grove in the rural foothills of the Madonie Mountains on the island’s northern coast; it was Saro’s family’s sloping land, dotted with old-growth apricot and pear trees.

Along this road, he had once plucked ripe berries from the mulberry tree; he had twisted the stems of plump grape clusters from the vine; he had unearthed soil with his hands to show me exactly how the bulb beneath wild fennel grows. I had watched him pull back layers of the bulb’s outer skin. Then he made me close my eyes. He brought its heart close to my nose, bidding me inhale the earthy licorice scent, awakening me to the mysteries of this place. He was intent on showing me the strength and delicacy of this natural world - his birthplace. Last summer, we stood surveying the hills where he had played as a child.

“Do what you will, but bring some of my ashes to Sicily,” Saro said to me last summer, as we stood on this very spot. His cancer had recently returned, but his death still felt like an abstract thing. I thought we had a few more summers ahead, maybe five. Still he was preparing, and he was preparing me. This was the place he wanted part of himself to remain forever, so here I was, having flown nearly seven thousand miles from our house in Los Angeles in order to keep my promise that I would do so.

The sounds of late-summer crickets and cicadas and the scurrying of lizards taking refuge from the setting Sicilian sun surrounded me. The air was thick with the intoxicating scents of eucalyptus, burning wood, and ripening tomatoes. In the distance, the town church bells struck, calling people to afternoon Mass. For a moment, I imagined my seven-year-old daughter running barefoot on the cobblestoned street. She was the other reason I had cast myself on Sicilian shores, the only way I knew to keep her dad alive in her memory.

I pulled the car over at the top of a steep hill, put it into neutral, and double-checked the brake. Then I pried the box containing my husband’s remains from between my thighs, sticky with sweat. The little wooden ring box where he had once kept his guitar picks now contained a portion of him I had saved for myself. It left a design of vertical lines on his favorite spot in my flesh. The time had come. Yet I couldn’t bring myself to get out of the car.

Saro, a chef, had always said he married an American, an African American woman, who had the culinary soul of an Italian. In his mind, I was Italian the way all people should be Italian: at the table. Which to him meant appreciating fresh food, forging memories and traditions while passing the bread and imbibing local wine. It was a life I had stumbled into by chance when we literally collided underneath the awning of the best gelateria in all of Italy. Luck, fate. One look and I could see he had the kind of deep brown eyes that carried stories and that would entice me to tell mine. His profile could have been lifted from an ancient Roman coin, and his configuration of features - olive skin, firm jawline, and head of wavy, charcoal black hair - conjured a vision of me entangling myself with his body that came to me like a crack of lightning on a clear day. I said, “Mi scusi” in my best college Italian. He said, “Hello” back without a moment’s hesitation. Right then, the fire met the pan.

I could see now that Saro had appeared in my life and almost instantly created form where there had only been space. He soothed the places I hadn’t known needed soothing, seemed perfectly willing to embrace the parts of me that were wanton, unsettled, unfinished, and contradictory. Together we had engaged life as two forks eating off one plate. Ready to listen, to love, to look into the darkness and still see a thin filament of moon.

Finally I cracked the car door and cooler air flooded in, along with more memories. I thought about Saro and the last earthly pleasure we had shared together, a rocket-shaped ice pop. The specificity of the memory overwhelmed me. It took me right back to our last day. When the expanse of our life and everything in it had been reduced to the tiny intimate gestures death necessitates: feeding my dying husband an ice pop. How I had put it to his lips, having troubled the hospice nurse to take one out of the freezer at the top of every hour, just in case he awakened and was able to eat one. It was delicate, steady care I wanted to offer, my final acts as his caregiver and lover. I wanted the last sensations on his palate to be soothing, soft, and even pleasurable. He deserved that. During years of standing beside him in the kitchen, he had taught me that details are everything. The impact of the first taste happens only once. If ice pops were required, I decided, they would be the most inspired ice pops: freshly squeezed lemonade with a touch of agave.

In those final days, there were both compression and elongation of time. And although I did my best to prepare our daughter, Zoela, who had just turned seven, for a life without her dad, to keep her close, to include her in the event that would change her life forever, I worried that I had not done enough.

On the final day, I closed the pocket doors to our study and sat beside him on the hospital bed. I rubbed the melting treat against the flesh of his lips. A lifetime of kisses had been mine for the taking from those lips. Then I kissed his forehead, and when I pulled back I could see that a bit of the juice had met his tongue. He never took his eyes off me. I licked from the iced juice, too. He smiled. We had exchanged a moment of pleasure, just as we had in the beginning when he’d whispered in my ear after we made love, “I have an endless thirst of love, the love of your body and soul.” And then he was gone.

His death put pan to flame once again. All the strength I had gathered as a woman, mother, and lover wilted, instantly and completely. It was like being flung onto jagged rocks at low tide, belly up at high noon on the longest, hottest day of the longest year of your life. There seemed no bottom to my grief, no way out, just through. Through darkness, isolation, and the deprivation of his touch. But it was my final promise to him that had brought me, months later, to this orchard in the heart of the Mediterranean, desperate for a sliver of light.

The last church bell rang, and I held the ring box of ashes in my hand. Amore, l’ho fatto - I did it. I have brought us this far. I got out of the car.

The setting sun reminded me of our first road trip together through Sicily, when we had driven the remote interior. There had been nothing to see but mountains, wheat fields, cows, men on donkeys, and untold olive groves. We couldn’t get radio reception, so we ended up talking for hours along the winding roads, with interludes of silence and the endless downshifting and upshifting of the tiny Fiat. I remember that the afternoon light was another passenger in the car, witnessing two lives in motion. Now the sun was again my witness, as I finally stood free of the car and fully erect. The earth felt slightly loose beneath my feet.

Before me stood a large iron gate and colonnade of country stones, compacted earth and clay, stacked on top of one another to flank the gate. It created an impressive but simple rustic entrance. Along either side of the main entrance ran a barbed-wire fence atop a stone retaining wall. It separated the family land from the road. I looked at the fence and walked a tiny bit of the perimeter in the hopes of finding an easy opening. There was none.
​
Suddenly exhausted, I sat down on a haphazard pile of rocks that formed an impromptu retaining wall and stared at the town below. I could see the church cupola and beyond that fields that dropped precipitously into a valley that led to the sea. Then I heard a tractor approaching in the distance.

I didn’t want to be seen in that moment, I didn’t want to explain to a passing farmer moving along the road, returning home with the day’s harvest, why I was standing outside the all but abandoned orchard. Worse yet, I didn’t want word of it to get back to the small town that the black American wife had been spotted in a place no one else ever went. So I stood up and quickened my pace. I desperately searched for an area of loose stones, the result of shifting earth and rains, so I could force my way under and push my way in. I’d try to find the exact spot where we’d picked pears off the tree and Saro had held our daughter up to get the fruit closest to the sun the previous summer.

In Sicily, love, truth, and grief are neither simple nor straight-forward. Each runs as deep as the roots of the olive trees that have dotted the island for centuries. Secrets often run deeper. What I was about to do not only was secret, but technically it was probably illegal. In rural Sicily, cremation is rare to nonexistent. We had already had the official interment in the town cemetery weeks earlier. Putting ashes, even a portion of them, anywhere but in a cemetery probably violated religious and civic law. But my life was well outside convention as I scrambled along the earth looking for a way in.

Had I thought a bit in advance, had I planned this better, had I not had to lie about my whereabouts to everyone close to me back in town, I could simply have procured a key for the gate. I felt particularly unsettled about my mother-in-law not knowing. She was, after all, a woman with whom I had not always been on the best of terms. Saro’s parents had declined an invitation to our wedding, less than thrilled that their beloved son was marrying an American, a black woman. Yet here now, my daughter and I were guests in her home, together, a bereaved family. Maybe I could have avoided the dirt and scrapes I was surely about to endure. I could have walked into this place in the open truth and then sat peacefully under the setting sun, falcons flying high above, the bray of a mule in the distance. But my grief and love didn’t work that way - and I had made a promise to the love of my life. So I got onto my knees, let the dirt coat my skin, and rolled under a barbed-wire fence. I was determined to follow my chef ’s last instructions from scratch, in the hope that they might somehow lead me to take my first steps in reimagining my life without him.