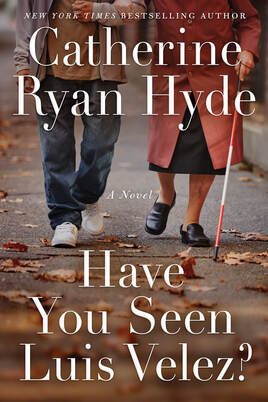 Raymond climbed the stairs slowly, using the bannister to pull himself up. He felt drained, almost completely devoid of energy.

Just as his head came level with the second-floor landing, he saw her again. And heard her. She was wringing her hands in front of her flowered skirt.

“Is that Raymond?” she asked. “From the fourth floor?”

Once again those eyes seemed to search a spot Raymond did not quite occupy. Almost, but not precisely.

“I was just thinking…”

Raymond stepped up onto the landing and walked a few steps down the hall in her direction. A voice in the back of his head told him not to. If Andre were here, Andre would have told him not to. Maybe that’s who the voice was, in the back of Raymond’s head, giving unwanted advice. But it seemed silly to fear her. She was so completely ancient. If Raymond felt the need to get away, he could turn and vault up the stairs two at a time and be safely inside his apartment before she could even reach the stairwell. The way she seemed to struggle with her vision, he might be safe inside before she could even locate the stairs.

“Thank you for stopping. Most people don’t stop. Most people hurry by. When I ask a question, they hurry faster. I wonder sometimes why we’re all so afraid of one another. Or … actually … no, I don’t really wonder. I know why. But I reflect on it. And I think it’s a shame.”

Raymond noticed a trace of an accent as she spoke. Nothing obvious. More like some speech pattern she had mostly left behind long ago. Raymond wasn’t good at identifying accents, but it sounded vaguely European to him.

“I’m sorry about this morning,” he said. “I was late for school.”

He was staring into her eyes, but she didn’t seem to notice. They had a rheumy look about them, those eyes. Cloudy where most eyes looked clear. It dawned on Raymond that the problem might be confined to those eyes. That her mind might be sharp and clear, and maybe it was only the literal mechanism of her eyes causing malfunction.

“I understand completely,” she said. “I was just thinking … You live with your parents? Up there on the fourth floor?”

“Pretty much. My mother and stepfather.”

“Maybe they know Luis Velez? I know it’s not a likelihood, because people come and go from this building and never speak. Look at us. We never said a word to each other before this morning. But I just can’t help thinking … for more than four years he came here to help me and check on me. Three times a week, at a bare minimum. Maybe someone else who lives here might have seen him.”

“I don’t know,” Raymond said. But he agreed, silently within himself, that it was unlikely. “I’ll ask them.”

“I would very much appreciate that. And you’ll come tell me if they know anything?”

“Sure.” Raymond turned away and walked back toward the stairs. Just as he reached for the bannister and lifted one foot to step up, he heard her voice again.

Raymond froze. Set his foot back down. Focused on the feeling her words created as they settled in him. It was very much the same feeling as in that brief moment when the cat chose him over food. Other than that, it felt strangely foreign. Welcome, but mostly unfamiliar.

Then he climbed the stairs again to his fourth-floor apartment.

Raymond heard him, but only in a distant way. He didn’t think to connect much relevance to those words. He definitely didn’t realize the man was talking to him.

“Raymond,” his mother said. “What’s with you? You look like you’re sleeping with your eyes open like you used to when you were little.”

He picked up the butter dish, which was more or less in front of his plate, and passed it to the left. His ten-year-old sister, Rhonda, the oldest of his half sisters, took it from him without comment and passed it on. Raymond watched and waited to see if she was laughing at him on the inside. He couldn’t tell. He never could tell. Rhonda and the eight-year-old Wendy had been inscrutable to Raymond almost since they had learned to talk. They talked incessantly to each other, but rarely to him. Only the baby of the family, Clarissa, seemed to consistently notice Raymond, and care.

“How was school today?” his mother asked.

But Raymond didn’t want to assume she had asked it of him. There were quite a few people at that dinner table.

“Oh, that’s right,” she said. She ran a hand through her bleached-blonde hair, finger-combing it off her face. She did that when she was thinking.

Unlike Ed, she listened. But then she forgot.

Raymond opened his mouth to say something. But he was still unclear on what the something would be. Part of him wanted to express what a big deal it was. Bigger than her words had tried to make it out to be. But it seemed unlikely that he would say a thing like that. He never had before.

“Do you know someone named Luis Velez?” he asked, looking first to his mother, then to Ed.

“I know a guy named Jose Velez,” Ed said, which was surprisingly unhelpful. Or it would have been surprising from someone else. Ed tended toward the unhelpful.

Raymond expected them to ask why he wanted to know, or who this Luis Velez was to him. Something that showed an interest, or a connection. Then, a moment later, he wondered why he had expected it. After all these years.

“What about you, honey?” his mom said, turning her attention on Rhonda. “How was school?”

Raymond left the table in his head. Thought about finding a phone book or an online directory and seeing how many listings there were for Luis Velez. A couple? A couple dozen? A couple hundred? Then he wondered why the old lady hadn’t done the same. Her eyes, maybe? But there was still directory assistance.

He couldn’t get a bead on whether there was a logical reason why the old woman wasn’t able to solve this problem on her own.

Something she had said earlier came popping up into his brain.

For more than four years he came here to help me and check on me.

Which meant she needed help. And checking. And she had no one helping or checking on her now.