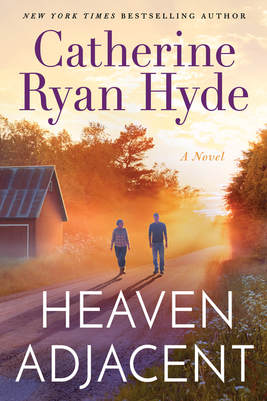 “So this is why more people don’t run away from home,” Roseanna said. Out loud into the blank wall of fog.

She had found the hill in question, and was walking toward the top of it. But it was not as easy a task as it had sounded in the verbal instructions.

First of all, it was steep, which required a heart and lungs in good condition, which Roseanna did not possess. So she had to take only three or four steps at a time. Then she would stop. Lean her palms onto her knees. Gasp air. Take a few more steps.

Perhaps more of a problem was the mud. The rain had left the hill mucky and slippery. Roseanna was wearing sensible shoes, by Manhattan standards. Slip-on boat shoes of the sort that could be worn without socks. They even had a bit of tread on their rubber soles. But it didn’t help much. The mud simply adhered to them, building up into a thick, heavy ball on each shoe that made it hard even to lift her feet. Then, as she placed each foot down again, the mud on her shoe against the mud of the hill provided a system more like makeshift skis than any sort of traction.

She picked up a stick when she spied one, and used it to scrape the soles of her shoes every few steps. Still, she could not shake the feeling that one wrong step would send her sliding and tumbling to the bottom of the hill. She had no idea how far down that might be, because she could only just see her hand if she extended it as far as her arm could reach.

And she was shivering, because her light coat was not sufficient against the wet chill.

A sensation of panic was rising in her gut, and fast. She felt exposed.

What if the fog cleared and she could no longer see the road, or her car? What if she was lost out here? Forced to spend a night in the elements? How cold would it get in the wee hours, waiting for someone to find her? Would it rain again?

In the midst of this jumble of panicky thoughts, Roseanna failed to notice that she was no longer stopping to gasp. She still had to scrape mud at regular intervals. But the walking was not taking her breath away.

She stopped. Glanced around. The earth on all sides of her seemed more or less level.

She pulled her phone out of the pocket of her light jacket, woke it up with her thumb.

Roseanna laughed out loud. And, with the sound, all the panic left her. Just like that.

As she was finishing her phone call with the cavalry - which role in this instance was played by a semi-nearby Triple A repair shop with tow service - Roseanna raised her eyes and looked back the way she had come.

The fog had cleared. Or, more accurately, it had allowed a hole to form in itself. The sun above her was warming the fog into a kind of filmy Swiss cheese, leaving a space for Roseanna to view her surroundings.

It was a strange thing to say. Even Roseanna thought so. Nonetheless, it’s what came out of her mouth in that moment.

The earth dropped off below her feet into a valley of farmland - mixed crops of various shades of green planted in careful grids. Dividing the planted fields lay strips of forest, tall trees stretching up out of the earth, swaying in a light wind. Streams ran through, their water glinting in the sun at various points along its journey. On all sides of this pastoral scene rose more hills. Deep, healthy green hills. Green like a pool table, only better. More natural. A huge bird sailed on a current of air above this heaven. Maybe large enough to be a hawk or an eagle. Roseanna knew nothing about birds, so she didn’t know. Still, birds were playing a larger than average role in her day. There was no denying that.

It’s hard to find a particular place when you don’t one hundred percent know you’re even looking for it, Roseanna thought. She silently congratulated herself on that unlikely accomplishment.

She glanced down at her phone again. It had, rather rudely, downloaded two texts and six voice mails. Wincing slightly, she clicked through to the texts.

One was from Jerry, the only other senior partner now that Alice was gone. Roseanna could read the first two lines without opening it.

Honey, we understand, but this is not the way to solve it. What about the Neiderman case? When —

She didn’t click on the message to read the rest.

The second was from Nita.  OK, not to sound panicky or anything but all the other partners are freaking out. If you could -

She clicked back to home, then to phone and voice mail. All six messages were from Jerry.

Roseanna held her finger down on a button until the prompt came up to power off the phone. She slid her thumb as indicated and the screen went dark.

Then she slowly, carefully made her way back down the muddy hill.

By the time she arrived back at her car the donut hole of fog had closed again. But it was a light, misty thing, this fog. It no longer felt dense and impenetrable and scary.

Roseanna leaned on her car before realizing its roof was soaking wet, then stood beside it waiting for the tow truck to bring her gasoline.
It would be a longish wait. Forty-five minutes to an hour, the man on the phone had said.

The beautiful hills and valleys were gone again now. That hurt a spot in Roseanna’s chest, the absence of them. In that moment she would have done almost anything to get them back.

All she could see was a pale farmhouse surrounded by a plain, unpainted board fence. The house was a faded off-white, porch boards and roof sagging under years of weight and wear.

And, in front of this, she saw a realtor’s “For Sale” sign.