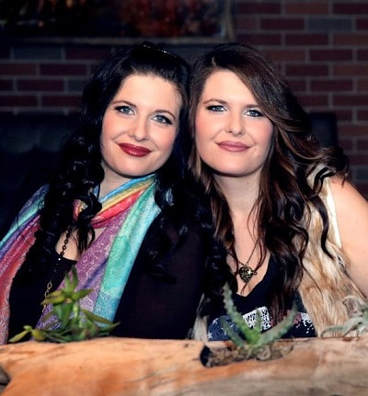 If you look at the vast history of country music in New Jersey, you’ll find there isn’t a vast history of country music in New Jersey, which is what makes twin sister country duo Spinn a bit of an anomaly. New Jersey natives Stephanie and Cheryl Lynn Spinner describe themselves as "city girls with country hearts," having grown up in a music-loving family. The sisters play traditional country music, inspired by artists like Dolly Parton, and write their own songs (with help from a best friend from high school). Both play the piano, and Cheryl Lynn plays the autoharp. While majoring in music industry at Monmouth University in their home state, they were able to perform at venues like The Stone Pony and the Saint (where another New Jersey native Bruce Springsteen also got his start), and they've shared billing with Drew Baldridge, Trent Harmon, Kalie Shorr, and LANCO.

While their New Jersey home may not be known for country music, the Spinner sisters are leaving a cowboy boot imprint on the Garden State and the rest of the country. In 2016, Spinn won country music station NASH FM’s NASH Next regional competition - which featured over 750 bands - earning them a trip to Nashville to perform in the finals and tour with the other Top 10 finalists from around the country.

Brooks & Dunn’s Kix Brooks, who was one of the competition’s judges, was so impressed with the duo that he asked to be part of the Spinn Fan Club (other judges included Big Machine Label Group’s Scott Borchetta, Rascal Flatts’ Jay DeMarcus, and Season 4 winner of The Voice, Danielle Bradbery).

Hitting the stage with their unique mix of traditional with playful banter and a heaping dose of humor, Spinn wins people over with both their music and their personality. It’s a combination that has brought country music fans together in many of New York’s and New Jersey’s top venues.

With three successful EPs already under their belt, Cheryl and Stephanie are enjoying living out their dreams, as they’re well on their way to being in rotation alongside the giants of the genre. On May 9th, Spinn released their single “Crazy for You,” a heart-warming, upbeat love song that is making audiences smile and sing along.
Nancy Burger, senior editor, spoke with Stephanie and Cheryl about their musical journey during their drive from New Jersey to Nashville to participate in this year's CMA Music Festival.

It was great to meet you both at the single release party last month. You have great chemistry with an intimate audience, and not all artists can really pull that off.

S: Thank you. We really love acoustic music and to see those kinds of performances. In fact, when we hear a song we like from a new artist, we go to YouTube and see if they can do it acoustically.

You're headed to the CMA Music Festival * next week?  What do you hope to learn from the experience?

S: So many things! It's our first time there, and we're very excited and overwhelmed by all the music that's going to be there - and by the number of people that will be there. Something like 100,000 people go to Nashville for this. We'll be surrounded by country music fans.

C: This is different for us. Being from New York, that's not something that we experience very often at all. The country scene in New York is still a diamond in the rough, and we have to keep working at it. We don't usually go to a place where we can walk the streets and bump into somebody that loves country music. It's very motivational for us.

And you're going to be playing at some of the "satellite" CMA Fest events, so to speak? How did you manage that?

S: Yes, we're playing two shows. The first night, we're playing at a Marriott Bistro, in a supercool event called a "suite party". It was arranged by a woman - a huge country fan - that opens up her hotel suite to up-and-coming artists to give them exposure.

C: The second show is going to be at the George Jones with an amazing country duo called Williams Honor** who split their time between Nashville and New Jersey. We got to play with them last summer in Seaside (on the Jersey Shore) at the Country by The Sea music festival and absolutely loved them as people and as musicians, so we reached out and asked if they had any leads on CMA Fest. We basically told them we were going down for the first time and had no idea what we were doing. A month or two later they asked us to play with them.

So, what you're telling me is that you basically networked your way to the CMAs?

This is awesome. It also happens to be one of the messages we try to deliver with Sanctuary - that women can empower themselves to accomplish what they set their minds to.

C: Absolutely. We decided about a month ago that we were going to Nashville for CMA Fest, and we were determined to play. We just didn't know how it was going to unfold.

How does CMA Fest relate to the actual awards ceremony?

C: The people that are playing in the Nissan Stadium are those artists up for CMA awards. All the other stages are for up-and-coming artists, which is awesome because those performances are all free.

S: The shows we're in are not technically CMA-affiliated, but it's great exposure and offers lots of possibilities.
Working as sisters, there is obviously trust and integrity which must be a great comfort. Are there struggles that go along with it? What has been your journey that way?

C: A funny thing about doing business with your sister is that we tell each other exactly how it is. We don't sugar-coat things. When it comes to new ideas and direction, we're going to avoid the other one going down the wrong path at all costs. It's good to have someone who is going to check you at every point, even though it can be rough on the ego at times.
The music business it tough. How has your journey evolved similarly or differently to what you expected?

C: We knew it would be hard, but we didn't know how it would be hard. Obviously, the competition is very stiff, and there are a lot of people trying to make it. We knew that. But we didn't realize all the little things that go into it. We are a business. It's not just songwriting and performing, but there's booking, promotion, payroll - all the things every small business has to deal with. If we had known before…all that was involved…it would have helped us move things along a little more quickly.

Where is your sanctuary?

S: You know how you feel when you really need to see live music and forget everything else? Immersing ourselves in another artist's live performance really feeds our souls. I think that's where our sanctuary is.


*The CMA Music Festival is a four-day music festival centered on country music hosted each June by the Country Music Association in Nashville, Tennessee.
**Williams Honor is a country duo that includes artists Gordon Brown and Reagan Richards.