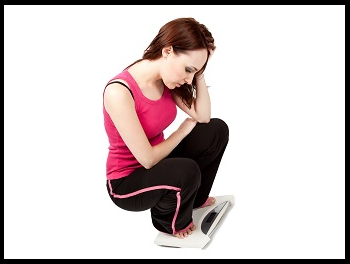 By Myrna Haskell
There it was…the dessert table…and the ice cream cake. Ugh! I was determined to skip dessert. After six graduation parties, the calories were piling up like lava at the base of Mount Vesuvius. It was going to take more than a stint on the treadmill to burn the calories off.

It’s true. My mother was right. Isn’t your mother always right? You have to eat less and exercise more just to maintain your weight once you reach that “certain age.” This doesn’t account for where the weight is going, though. After forty-five years or so, the calories go to places you didn’t know fat could exist – jowls (unfortunately, humans have these too), ankles, and the infamous underarm fat.

My friends and I are obsessed with our weight. It’s hard to deal with a body that doesn’t do what it used to. Twenty years ago, I could exercise that ice cream cake off just be chasing my toddlers around.

The infinite wisdom of midlife brought me to a place where I thought I had finally gotten body image, self-esteem and healthy eating under control. However, midlife plays a trick on you, and it goes by the name of Metabolism.

For some women, this change in their bodies as well as other major lifestyle and relationship changes is a bit too much for the psyche. The question is: When should we be concerned for ourselves, our friends and our family members? When does obsession with food, body image, weight and exercise become a problem that needs to be addressed?

Most don’t realize that disordered eating afflicts many women in middle-age – and so do eating disorders. So, women should be cognizant of their relationship with food and choose healthy ways to combat weight gain.

You might be surprised by the following statistics which show that it is not so uncommon for middle-aged women to be affected by disordered eating. According to an online study of over 1,800 women age fifty and older (International Journal of Eating Disorders, June 2012), thirteen percent of American women at this age experience symptoms of an eating disorder, and sixty percent say that their concerns about weight negatively affect their lives.

The National Eating Disorders Association (NEDA) reports, “Increasing numbers of midlife and older women are seeking eating disorder treatment, despite prevailing beliefs that eating disorders only affect the young. Many adult women hide their disorder effectively; others may have years of semi-recovery or subclinical symptoms, with the multiple stressors and transitions of midlife triggering relapse. Motivation for recovery is also more complex, as midlife women bring increased knowledge from life experiences and long to release themselves from their eating disorder identity.”

Judy Wylie-Rosett, Ed.D., head of Health Promotion and Nutrition Research and professor of epidemiology and population health at Albert Einstein College of Medicine, says that even though eating disorders are less common in midlife, older people are often under-diagnosed. Wylie-Rosett explains, “With older women, disordered eating is usually linked to serious self-doubts or striving for perfection.” In the elderly, depression, lack of desire, or boredom can be triggers.

Does yo-yo dieting and calorie obsession lead to disordered eating or an actual eating disorder? When do women need to realize that their physical and emotional health are in jeopardy?

Marci Anderson, MS, RD, LDN, describes the specifics in an article titled, “What is Disordered Eating?” published by The Academy of Nutrition and Dietetics (eatright.org). “According to the Diagnostic and Statistical Manual of Mental Disorders (DSM-IV-Text Revision), disordered eating is defined as a wide range of irregular eating behaviors that do not warrant a diagnosis of a specific eating disorder. Eating disorders, such as anorexia nervosa (AN) or bulimia nervosa (BN), are diagnosed according to narrow criteria. This excludes the majority of people suffering with disordered eating. Many individuals with disordered eating symptoms are diagnosed with Eating Disorder Not Otherwise Specified (EDNOS).

Symptoms of disordered eating may include:

“If a woman senses she has an abnormal relationship with food, it is probably a good time to speak to a professional,” advises Wylie-Rosett. However, she warns that women often hide their eating problems from others. Most women have spent their lives putting others first.  They will also tend to chores or work responsibilities before dealing with personal health issues.  This is a bad idea. Wylie-Rosett instructs, “Women should learn to properly prioritize. They need to look at how they’re treating themselves.” In other words, take care of your health first and everything else will fall into place.

A person with disordered eating patterns may not display all of the classic symptoms of eating disorders. Women should remember that even eating problems that don't not fall into a specific diagnosis could still be of concern. Any type of irregular eating, sudden weight gains and losses, or obsession that gets in the way of daily activities can put a person at risk for serious health problems.