Her current exhibition: The Singing Bowl: voices of the enemy took ten years to create. She wanted to make visual artwork that has a message, rather than work that is simply the product of play between the artist and her material.
The Singing Bowl: voices of the enemy : Over a period of ten years, Madeleine collected 25 personal stories from people caught in war from around the globe (Africa, Middle East, Vietnam, Haiti, The Holocaust, and more) - voices of people who live, or have lived, in situations of armed conflict. With each new story she created one visual artwork (both two and three-dimensional pieces), resulting in the collection. Her interest was not to literally illustrate each story, but for each piece to be a visual reminder that there is a story to “listen” to.
The artist calls her project The Singing Bowl because singing bowls of Tibet produce many tones (or many voices) that build on one another in collective harmony. The 25 individuals who shared their personal stories for this project could have been anyone. They are quite random and varied.  Reading them exposes a common humanity.

Madeleine says, “Food is a silent thread throughout the works.” She chose a recipe from the culture of the storyteller, and something from this recipe appears in the work (not necessarily in an obvious way). Food was chosen to link the voices because it is a universal life element. The act of nourishing oneself along with one's loved ones is completely opposite of the act of being on the front lines and killing a person one does not know.

Managing editor, Myrna Haskell, was invited for a personal tour of the phenomenal exhibition displayed in Hyde Park, NY. As Madeleine talked about each piece, she explained, “The art work is something I get out of my head in any way I choose. It’s not a literal representation of the story or the culture. Some pieces are more obtuse than others. This is because I want the viewer to think about each piece and contemplate it.”

Myrna asked her about how she feels now that the work is done. She responded, “It’s really not done. Until I can get more people in to experience it, I don’t feel that it is finished. You see, the exhibition isn’t complete unless the “listening” part happens. I want people to put themselves in the shoes of another.” 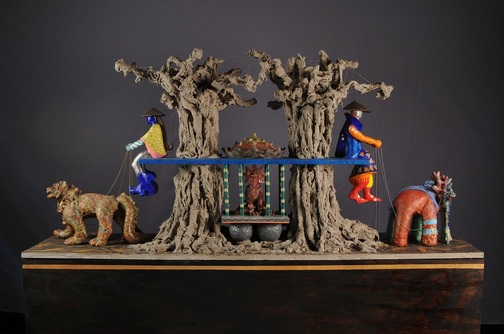