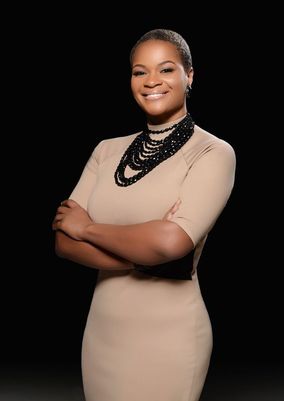 Maj. Jas Boothe grew up in Chicago, IL. She received a B.A. in Mass Communications from Mississippi Valley State University and dual master’s degrees in human resource management and management and leadership from Webster University. Jas is a U.S. military veteran, cancer survivor, philanthropist and author.

She joined the U.S. military and deployed during the Operation Iraqi Freedom and Operation Enduring Freedom campaigns. In 2005, she was a single parent in the Army Reserves and living in New Orleans when she learned she would be deployed to Iraq. During her mobilization, Jas’s life was torn apart by two significant events. In August of that year, she lost everything she owned due to Hurricane Katrina. Within a month, she received a devastating diagnosis of an aggressive head, neck, and throat cancer and was unable to deploy. She was facing discharge from the military, and she needed complex, full-time medical care, a job, and a place to live with her young son. The military directed her to the Department of Veterans Affairs, but she was told there were no existing programs for female veterans with children and that she should explore welfare and social services as an option. After dedicating years of her life to the military, Jas found herself homeless.

Things finally changed for the better. She responded well to treatment and later accepted a job offer from the Army National Guard. Afterward, she received an opportunity to return to full-time duty in Washington, D.C.

Jas was determined to ensure her sister veterans would have better options and resources in their time of need. In 2010, she founded Final Salute Inc. as part of her commitment to "never leave a fallen comrade.”

Jas is the recipient of numerous awards for leadership and community service, including the Standing O-vation Award (presented by Oprah Winfrey and Toyota), People Magazine’s Heroes Among Us, Tiffany Circle Distinguished Woman Warrior Award (American Red Cross), Department of Defense Spirit of Hope Award, and Woman of Distinction by the National Organization of Black Elected Legislative Women (NOBEL Women).

She is the mother of two boys and is married to a former Marine combat veteran.
About Final Salute Inc.:

In 2010, Major Jas Boothe founded Final Salute Inc., a nonprofit organization designed to meet and understand the unique needs of homeless women veterans and their children. Besides transitional housing, Final Salute offers emergency financial support, free, professional business attire, educational classes in budgeting and saving, and other services and resources to help female veterans get back on their feet.
Myrna Beth Haskell, managing editor, spoke with Jas about her military service, the hardships she endured and was determined to overcome, and her work with Final Salute Inc.

Could you tell me a bit about your life prior to serving in the U.S. military?

I grew up in the projects of Chicago. I was determined to go to college and received a full athletic scholarship (for basketball). I majored in TV and radio broadcasting. I had plans to be a news reporter and anchor. I was so excited to start my career, but when I went in for an interview, they told me that I was too tall. Most of the other female broadcast journalists were much shorter than me, and they were afraid that I would look too tall next to the male broadcast journalists. I was a single mom, and I wanted to make my son proud of me. I wanted to prove that I was not a product of my upbringing. There’s a negative connotation for ‘single mom’ in our society. The military became a good option.
And the military didn’t provide services to help you get on your feet?

Once you’re out of the military, they’re no longer responsible. I couldn’t work elsewhere because I still needed advanced medical treatment, but I was now a veteran, so the army sent me to the Department of Veteran Affairs for Support (VA). They told me that they only had services for male veterans and advised me to get welfare services and food stamps like other women in my situation (I was a single mom with a young child)*. I was sleeping on my aunt’s couch with no place of my own.

*70% of homeless women veterans are single mothers (www.finalsalute.org).
Was this lack of assistance the inspiration behind founding Final Salute Inc.?

I thought that maybe my situation was a fluke in the system. Then, I saw this homeless, female veteran on the Oprah Show, and I realized that I wasn’t the only one. This was when I picked up the phone and started to make calls.

What is specifically lacking in the VA program for women? Was it designed more for male veterans in mind?

The housing in most shelters is geared for male veterans. Either they don’t take in kids at all, or there are restrictions on the age of the children. They also put women with men who are registered sex offenders. Who would ever want to be in that kind of shelter? Not me!

Tell me more about Final Salute Inc. What specific services do you provide women veterans and their children, and how many women and children have you helped since 2010?
Could you tell me more about the housing? This is group housing, correct? Do the relationships that these women form with their housemates also assist in them finding their self-respect and will to move forward?

We have a three-story, 9,000 square foot facility in Alexandria, VA which houses ten women and children. It’s an independent living facility in a group housing environment. They can stay for a period of up to two years. Each vet has her own room and bathroom, and her children get a room. We help women all over the country. It’s unfortunate, but we have to turn women away. There are just too many - we can’t take them all. So, we offer those we cannot take in a list of other organizations and resources that may be able to help.

The women who are housed together have a common goal and a special bond because of their participation in the military.

It must be extremely rewarding for you…knowing that you have been able to help your fellow female veterans so that they are not in the position you found yourself in. Could you tell me about one of the success stories that drives you to continue with your work?
Have there been any changes to how the VA assists female veterans since you founded Final Salute?

You know, the VA is trying, but they have a long way to go. For instance, there is a need for more female services, such as access to OB/GYN medical care. Some people have a great experience, but for some, it’s a nightmare. What we have to make sure of is that all vets across the board are being helped. It’s great because we’re being heard, but there’s still more to do.

You went back to the military full-time once you recovered. Are you still employed by the U.S. military?

I’ll be retiring. This is my last year in the Army Reserves.