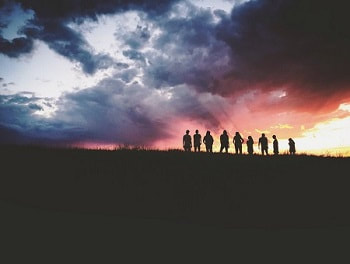 One of my elementary school pals vanished quite suddenly from my life just as we were beginning junior high school. She had a great sense of humor, and she was worldly and smart – just the right combination to attract my attention. I have many fond memories, such as when we tied for first place in a math contest. We had recited times tables faster than everyone else in the third grade.

Unfortunately, during the summer after sixth grade, she started distancing herself and hanging out with people who didn’t go to our school. It soon became apparent that my friend was involved with a bad crowd. Rumors varied, but most reported that these “new friends” had police records and were into drugs. My friend had moved on, and our friendship was never rekindled.
My friend’s parents must have had a much more difficult time than I did. Adolescent friendships are powerful and influential. Teens crave acceptance from their peers. They also begin to seek guidance from their friends rather than their parents. So, when a parent disapproves of her teen’s new crowd, things can get pretty tricky.

Why do Teens Seek Toxic Relationships?

A crowd can be “wrong” for many reasons. Sometimes it’s obvious, such as when a group is into illegal drugs and shoplifting. However, “wrong” can also mean that your teen is being mistreated or hanging out with friends who have grown up with a different set of values. Any of these situations can be toxic for your teen.

Charles I. Shubin, MD, director of Pediatrics at Mercy Family Care, a division of Family Health Centers of Baltimore, believes that some teens might get involved with undesirable crowds because of a need to rebel against family values. “The attraction of forbidden fruit and the need to rebel probably lead teens in this direction,” he says.

Mary Jo Rapini, M.Ed., LPC, a psychotherapist and co-author of Start Talking: A Girl's Guide for You and Your Mom About Health, Sex or Whatever explains, “Many times teens look for recognition from others when they aren’t feeling connected with their family at home. Sometimes parents forget how important family is to their teens. They forget to set time aside to talk and listen to their teens.” Rapini believes that most dangerous behaviors can be avoided if parents set stronger boundaries. However, teens also need to feel that they are an important part of the family structure. “Teens need to feel needed by their family or they will seek this need elsewhere,” Rapini says.

Parents need to decipher the following: Is the situation a typical adolescent learning experience or something their teen needs to extricate himself from?

Look for changes in behavior. If a teen suddenly becomes secretive or starts to ignore rules that he used to abide by, trouble might be brewing. Rapini warns that if your teen becomes totally obsessed with pleasing a group of friends, there is a good chance the power balance has shifted and your teen is being used. If a teen’s friends exhibit the following behaviors, parents should be concerned:

When parents disapprove of a new group of friends, it’s difficult to handle because teens often view criticism of their friends as a personal attack on their own character. Therefore, parents need to tread carefully because too much criticism will likely encourage the friendships.

Dr. Shubin explains, “I think the trick here is diversion, not confrontation with criticism. If the parent says anything negative, the teen is likely to move closer to the criticized group.”

Rapini urges, “Set time aside each week to connect with your teen.” Scheduling time for weekly walks or other activities your teen enjoys will work wonders because you’ll have time to communicate. You’ll gain your teen’s trust if you’re a good listener and open-minded.

However, if illegal behaviors are a concern, parents should intercede. Seeking help from school officials is a good place to start.

Tips from Parents with Teens

“To forbid makes it more inviting. We have a family talk about what we are concerned about, and then we restrict the amount of time and places they can go or hang out with that crowd. At times, we would only allow hanging out at our house. This kind of compromise, for the most part, has worked out well." ~ Felicia Sealey (NY)

“I don't think you can tell them who they can't hang out with, but you can point out some bad choices that friends have made and what the consequences could be. I have learned with my daughter that it works best if I get her opinion first before voicing mine.” ~ Risa Dean Holmes (CO)

“As with any issue, teens need to know where the lines are, or they will keep pushing until they find them. Many push until they fall off a cliff so to speak.” ~ Bev Doney (VT)