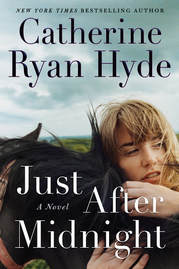 Chapter 2:
Respect
“It didn’t happen the way my dad said it did,” Sarah began. “Not at all.”

They sat on the makeshift straw bed in the empty stall, nearly shoulder to shoulder. Watching the neurotic horse rock and sway. He watched them in return. Faith briefly wondered if they looked troubled to him as well.

She waited for the girl to continue. She did not care to push. But no more words seemed forthcoming.

“Well, honey,” Faith said at last, “I’m at a handicap here, because I don’t know what he said happened.”

“I thought my grandmother would have told you.”

“Oh. Okay. Well. They had a fight. Everybody agrees on that part. It was a little after midnight, and they were having this big scream­ing fight in their bedroom. And then my dad told the police he went downstairs and had a drink and turned on the TV. And then he heard the gunshot. And then he ran back upstairs. And she . . . had . . . you know.”

A silence fell, save for the stall-door thumping of their four-legged across-the-aisle neighbor. Faith’s stomach broke into a cold sea of tin­gling, as if someone were trying to electrocute her on a low setting. Because she was beginning to get a sense of where this was headed.

“Okay,” Faith said. “Okay. That helps. Now I know what everybody thinks happened. Now go ahead and tell me what really happened.”

“I was in my room.” Her voice had fallen to a soft whisper. She leaned in closer, so Faith would hear. “It was just after midnight. The fighting woke me up. And then I heard the gun go off. And then I ran out into the hall. And I saw my dad. He was just coming out of their bedroom. And he looked at me. And the look on his face . . . it was like . . . I don’t know. I don’t know how to say it.”

“Did he have the gun when you saw him?”

“Was there any time between when you heard the fighting and when the gun went off?”

“No. It sounded like she was right in the middle of a sentence.”

“You know I have to tell your grandmother this.”

Faith looked at the neurotic horse in the dim light, and he looked back. Just in that split second his movements stilled.

“This is big, Sarah. This is a huge thing. She’s trying to dig up anything she can use to get legal custody of you. She needs this. And even beyond that . . . I think you know it’s one of those things we can’t keep to ourselves. It’s too important. I think if you didn’t know that, we wouldn’t be having this talk.”

“Right. Yeah. I know. But just . . . not today, okay? Let me just get through today, and worrying if someone is buying Midnight. Let me just have one day to get used to the fact that I even told you. Before you tell my grandmother and she tells everybody in the whole world. Okay?”

And with that, the horse resumed his swaying.

They sat in silence for a time. A few minutes at least.

Faith lay back down on the clean horse blanket on the soft bed of straw. A few minutes later Sarah stretched out as well. As though they would sleep. It seemed like a pathetic charade to Faith, to pretend they could sleep after a revelation like that one.

Faith heard footsteps, and for a moment it alarmed her. Caused her heart to race wildly. As it so often did. But she lay still and listened, and soon realized it was probably just the person who did the stall checks on the horses at night.

“I do know,” Sarah said when the footsteps had faded away again.

But the rest of the night crawled by, with no sleep for Faith, and no more words spoken.