Kicking and Screaming:
A Memoir of Madness and Martial Arts
(She Writes Press)
© 2021 Melanie D. Gibson 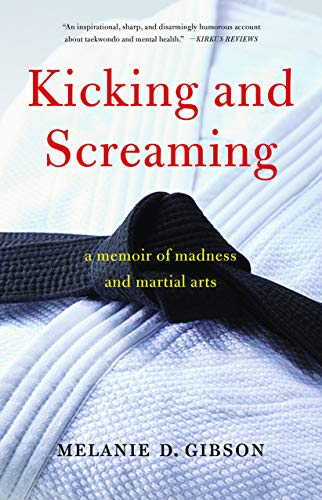 Preorders available: Publication date is April 20, 2021
“The Beginning” (Reflection on taekwondo and my growth)

I wondered how different I might have been had I stayed with taekwondo as a child. It would have given me purpose, focus, and discipline and, more importantly, calmed me the hell down. Perhaps I could have avoided the crushing disappointments of my dating misadventures, the unnecessary worry over getting through school and finding jobs, and the haunting torment of my depression and anxiety. Maybe there wouldn’t have been so many nights spent sobbing on the floor, wailing in frustration, and resenting the agony of being stuck in the suicidal limbo of not wanting to live but also being too afraid to die.

On the other hand, perhaps it was just as well that my family and I stopped training in 1991 when I was twelve. If I had earned my black belt as a teenager, I might have simply turned my interests toward other activities, which is what I’ve seen happen to some of the younger students at my dojang. I certainly wouldn’t have appreciated the emotional and mental journey of earning my black belt if I’d gone through the process as a child. Had I made it to black belt back then, taekwondo might have fizzled into the blurred memories of my youth and would have never demanded a resurrection the way it did when I was thirty-three.

Maybe I had to go through all that unpleasantness—the breakups, the panic attacks, the crying jags, the death wishes, the anxiety—to become who I am today. Had I not gotten to the brink of total mental self-destruction, I would not have been motivated to change. I would not have gained the exponential growth I’d experienced through taekwondo. No, I wouldn’t change a thing.

My therapist, Ramona, once remarked that I seemed to be “becoming more real,” not too dissimilar from the comment my boss had made about my blossoming personality. I had been hiding my pain and anxiety behind a mask of superficial accomplishments for so long that I didn’t know how to truly be myself. Once I began to accept and appreciate who I was through the strides I made in counseling and the leaps I made in taekwondo, the protective façade began to crumble. I thought about Ramona’s comment as I stood in front of the restroom mirror at the dojang, looking into my staring blue eyes and gazing at my black belt, the symbolic manifestation of who I had become and who I really was.

I came back to taekwondo when my mind and heart were finally tired of fighting. Oddly enough, kicking and screaming in taekwondo class finally quieted the kicking and screaming inside my soul and mind. It forced me to grow up. I became more optimistic and laughed a lot more. I stepped up to challenges and no longer felt threatened or intimidated by the people around me. Now that I knew how to fight, I no longer went looking for a fight. I took charge of my life and refused to allow myself to continue playing the helpless (and blameless) victim. I found a strength in myself that had been silent for too long.