Love in Any Language
​(She Writes Press)
© Evelyn Kohl LaTorre 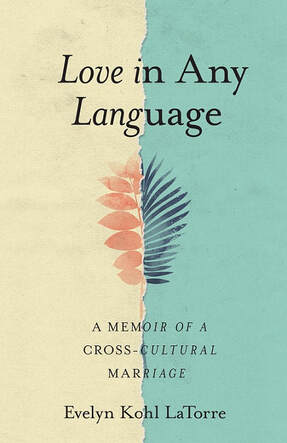 In this second memoir, Evelyn relates how her early life in Montana prepared her for living in Peru, but not for marriage to someone who must learn a new language and employable skill before he can support his family. However, she had learned how to be strong and determined to meet most challenges and opportunities that came her way. These include winning prizes, almost giving birth in the night school principal’s office, and the suicide of Evelyn’s brother. A 32-year career as a school social worker, psychologist, and administrator are set forth.
Home Again
On the afternoon of July 7, my family—mother, father, three sisters and two brothers—showered me with hugs at the San Francisco Airport. For nearly two years, they’d known about my life in a distant third-world country only through my letters. I hadn’t been physically present to reassure them, answer their questions, or share my experiences. Now they expressed relief that I seemed healthy. Mom could stop worrying about my safety.My arrival confirmed that their prodigal daughter had returned intact.

I was also eager to resume my favorite sister status with my six-year-old brother, Randy. He had sent me sticks of gum and kisses marked with X’s in his letters to Peru. Now he looked at me and smiled, then withdrew. Randy wasn’t certain who I was. Though disappointed, I tolerated losing my importance to him. Soon I’d have my own child.

Once more back in my former bedroom, I tackled emptying my suitcases and four trunks of the Peruvian articles I’d brought back—alpaca rugs, unique crafts, and the baby socks, hat, and poncho, bought before I knew I’d have use for them. My body warmed with anticipation, knowing that a more treasured part of Peru, Antonio, would soon join me. I cooked up some of the quinoa the Abancay 4-H girls’ club had gifted me and served it mixed with cheese. The dish didn’t have the same nut flavor as when I’d had it in Peru. My family hesitated to eat this strange foreign protein.

In the land of plenty, I set about eating the things I’d missed for the past two years—pasteurized milk with Cheerios, Mom’s buttermilk biscuits, and real hamburgers and hot dogs. The mellow taste of café con leche (coffee with milk), which I’d enjoyed in Peru, faded when I ate my dessert of apple crisp, topped with whipped cream. This, after I’d downed my favorite home-cooked meal of fried chicken with mashed potatoes and “Evelyn gravy.” No one seemed surprised that my stomach protruded a bit.

Neither of my parents thought my decision to marry had been a wise one, but they said little to me. My sisters told me that Dad had hit the ceiling when he’d read my letter from Peru saying I was marrying Antonio. He had remarked in front of them, “That guy just wants a green card.” He didn’t say that to me now that I’d wed “that guy.” I suspected they wanted more than an unemployed foreigner who spoke no English as their first son-in-law. My parents hadn’t yet met Antonio, so they couldn’t appreciate his qualities. They’d come to love him as I had—I hoped.
The man I’d known the longest had been my father. During my formative years in Ismay, Montana, he had earned $200 a month as a signal maintainer for the Milwaukee Railroad and hadn’t been particularly ambitious. With the produce from our acre-sized summer garden, we five children didn’t go hungry. However, the linoleum floor in our kitchen had had holes in it, and we sewed most of our own clothes, sometimes using the cloth from the twenty-five-pound flour sacks we purchased. And Dad didn’t allow us to buy sandals for summer. He would only purchase ugly, sturdy oxfords for our growing feet. He said it made no sense to pay for the open “holes” sandals had. But he’d always helped me make my special school projects, so I couldn’t complain.

Mom often disapproved of my decisions when she thought them risky, like travel and relationships with foreign guys. But she always helped support the consequences. This time she had a pile of applications waiting to assist me with my job search. Mom had encouraged all her children to take written government tests for practice, even when we weren’t looking for work. Before entering the Peace Corps, I’d spent days sitting in dingy gray exam rooms on uncomfortable chairs answering hundreds of multiple-choice questions for jobs I didn’t want. My scores had ranked me high on lists for clerk, secretary, and juvenile hall worker. My name had remained frozen on county employment lists while I was in Peru. Now I notified the county to reactive my name. I was available to work.

Mom’s forethought paid off. My first week home, she presented me with a list of open positions in county agencies. I took a deep breath. I was employable.

Writing my name as “Mrs. Evelyn LaTorre” for the first time on the job applications jolted me into reality. My name had changed, but I hadn’t. I felt like the same headstrong, determined woman I’d always been. Still, losing the last name I’d been born with felt like a familiar part of me had disappeared. Who was I now? How would I incorporate the man whose name I carried into my life in the US?

Being married and responsible for bringing Antonio from Peru to California brought out the social worker in me. I’d help him develop his potential. But having another adult depend on me made me uneasy and less free to do what I wished. This union would be another of my adventures.

Within two weeks of my return to the US, Alameda County called to offer me the night clerk position on the women’s burn ward at Highland Hospital in Oakland—an ideal job for me. A month in a Montana hospital at age twelve with possible rheumatic fever and four months’ training in Abancay’s municipal hospital had left me with a deep admiration for the medical profession. But, after the freedom of the past two years, the thought of working a regular nine-to-five day made me shudder. The four-to-midnight shift, though still eight hours, seemed less confining. I smiled into the phone and accepted the evening position. However, I had to pass a physical examination before being hired.