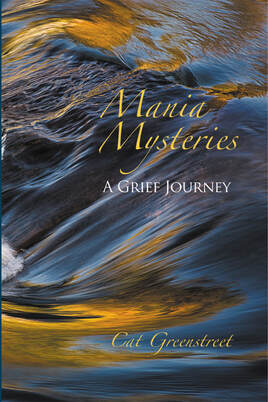 Mania Mysteries is a book about a manic episode I had in the spring and early summer of 2014 when I was 66 years old. At the time of the psychotic break, I was a high-functioning professional woman with strong, loving relationships. How and why this happened to me is part of the mystery. Now some years after, I am back in the flow of my life but a life different in substantive ways from before the break.

I am often asked if this was my first experience with mania. The answer is no. It was, however, the first time in 44 years. At the age of 22…I was on shaky ground in relation to self-knowledge, self-esteem, and self-worth. I had dropped out of college and had little direction, except to be a good hippie. It was 1970, and I was enamored with peyote and other hallucinogens, as were the other hippies I was traveling with in our yellow school bus, which landed in a commune in the Ozarks. These drugs gave me a taste of the higher consciousness I craved, a world of ecstatic oneness with nature and spirit, where everything felt perfect. This trip ended when I was committed to a mental hospital and the psychotic mania came to a stone cold stop after 11 electroshock treatments.

Dr. Wilson, my current psychiatrist, suggested we just forget about the 1971 episode, especially because of the drug involvement but also the distance between then and now….While I saw his point, I still can’t dismiss that first manic episode: it was a critical part of life’s journey, a steppingstone to my becoming an adult.

My psychotherapist, Therese, offered another angle: “Maybe you needed to relive that 1971 episode….Maybe you just did.” But why? I wondered. How strange life is! Everything in the universe moves in cycles, yet I’m surprised when it happens in my own life. Was there something I had to face with a more mature self?…It intrigued me that to make a deep change…at 22 and at 66, both spiritual and earthly, my soul was drawn to mania, and I was pulled into a psychic tornado that in both cases would radically change the landscape of my life, requiring reconstruction from the ground up. Both of these episodes required hospitalizations with the associated horrors. Yet for this writing…, I decided that the ’71 episode was best mentioned only when it helped enlighten a point I was making.

Mania Mysteries is also a journey of deep loss and the way grief eroded the architecture of my personality – my identity, my relationships, my approach to vocation – as insistently as waves melt away a sandcastle caringly built too close to the shore. My sister Lynn died in 2012 from lung cancer, and throughout the subsequent year and a half, my grieving was a relentless force, pushing me to break from the way I had oriented my life while she was here on earth….Maybe I needed to go wild to strip away the assumptions and unconscious agreements that had fashioned our deeply loving relationship. This story builds a bridge between my psychic-psychotic event and the impact her death and other losses had on my life. More specifically, I believe that the transformation I experienced following the episode was essential in the wake of Lynn’s death. The fact that it came through a manic episode is another wrinkle in the mystery.

There was also one other episode,…not a total break with reality like the other two…. In 2001 when I was 53, I experienced a brush with mania. Metaphorically, the body of the dragon emerged from the waters, and I soared on its back for a brief time. With help from family and a friend, along with my own disciplined spiritual practice, I was able to send the beast back into the depths where I needed it to be. In many ways, however, this was a prelude to the more powerful episode in 2014.…But what was the difference between those two times? What was the same? Why did the mania return with such seductive insistence?

Writing Mania Mysteries was an intrinsic part of my healing journey, gradually taking on a life of its own. As I shared what I was writing with my husband and some friends, they encouraged me to continue and eventually publish my story for others who hunger to understand more about the nature of psychotic mania. These may be individuals and their families and friends who have lived through such events, healthcare and mental health professionals who meet and treat such people and their families, and students who may do so in the future. This book may also interest anyone who wants to reflect on how the death of someone close affects the very fabric of our lives….

In Part I, “Mania,” I offer the reader as much of the actual experience as I can remember. It addresses what it’s like to be in an altered psychic state and what happens in a family and in our culture when someone finds herself in that mysterious, glorious, and frightening place.

In Part II, “Perspectives,” I analyze the situational underpinnings of my last two experiences with mania: the less powerful episode before Lynn’s death and the serious psychotic break after 18 months of grieving….

The following persistent questions lead to the next part: How did I survive and why? What changed in my life and the life of my family because I had this experience? How did resilience emerge and in what ways? Part III, “A New Integration of Self,” reflects on these questions. It was a mystery to me that I had had the episode and a miracle that I had not only lived through it but was better for having had it. Through journal entries, poetry, and essays, I reveal a slow, steady movement toward recovery and the resilience inherent in the human being when certain core needs are met.