Life Begins at the End of Your Comfort Zone
March 2017 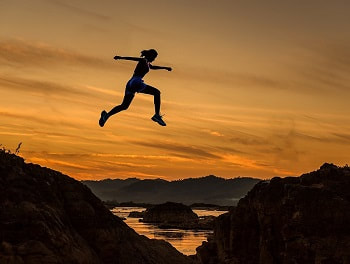 By Nancy Burger
The idea came to roost a month ago when I was invited to a "women's weekend" in the Adirondacks. Recently divorced and in a new apartment, I had vowed to do nothing but meditate, take baths and eat kale. But, despite my best efforts, I met Jessie and Tina - lovely, kind, and funny women who were easy to be with. None of us were looking for an Ethel to our Lucy, but we shared laughs, wine and wisdom. More importantly, we shared trust.

Still, when Jessie invited Tina and me to spend a weekend upstate with her and a group of friends, I bristled. Driving five and a half hours into a pine-treed abyss to spend three days with women I had never met? Are you kidding? For the chick who took a vow of kale-eating and bubble-soaking? It would be awesome, Jessie assured me. It was an annual tradition. The place was beautiful and the hostess was welcoming and down-to-earth. I could bring my guitar and share my music. They would love it. The weekend would be nothing short of magical.

I tried to remember the last time I experienced magical, safe in the knowledge that it had nothing whatsoever to do with leafy greens or hot water. Still, the jaunt sounded too-good-to-be-true. If they were all friends and this was a yearly bonding ritual, why would they welcome interlopers? Who would want to bunk with the newbies? Suppose they hated my clothes, my songs, my hair? Maybe it was really a coven of spell-concocting crazies looking for guinea pigs. I had visions of a stick-pin-bedazzled doll bearing my resemblance tucked under the guest bedroom pillow.

I thanked Jessie profusely and said I'd think about it. Tina shared my trepidation, but said she'd go if I did. I silently groused, Great…If I don't go, I'll be stomping on YOUR magical, mystical journey to mountaintop nirvana.

If life begins at the end of my comfort zone, I thought, I must be brimming with life, throwing off a halo of energy that could power a small city.

Then I said yes.

On the drive to the hinterlands, Tina and I enjoyed a smorgasbord of 80s music until the darkness morphed into pitch blackness and the miles became increasingly twisted and foggy. Finally, we turned into the driveway to see a bright light swinging from side to side in front of a jubilant Jessie, bundled up and shouting, "Hi girlssssss!"

We entered the house by way of the warm and inviting kitchen where we were greeted by Sam, the chef Anna hired for the weekend.

Let's repeat: The chef Anna hired for the weekend.

We were off to a rousing start. Our hostess guided us to the sprawling great room, past a runway-size dining table, and introduced us to the group gathered around the fireplace. The vastness of the room didn't compromise the warmth. Everything seemed to glow.

The next two days were replete with relaxation and an absence of schedule. The living area faced a wall of windows and a breathtaking view of Tupper Lake. A small table off to the side was covered with the early, chaotic stage of a jigsaw puzzle, where good-natured competition bloomed along with the opportunity to chat while focused on a common goal (not sure whether Anna planned it that way, but it was a brilliant ice-breaker). There was Scrabble, food, conversation, laughter, more food and peace. No airs, no gossip, no cattiness. The competition at the Scrabble board was keener but equally friendly - fist-pumping abounded after every double-word-score. On a tour of the property, Anna showed me the boat house, the floating dock and the garden shed, which abutted a patch of nearly twenty bird houses.

Magical was the perfect word to describe this place, these people, this respite.

After dinner that evening, I was invited to play and sing and, uncharacteristically, I felt entirely comfortable doing so. There were questions about the lyrics, the process, the inspiration. As a songwriter, it's not the attention I seek as much as the connection that comes from sharing my creations.

And connection was the most profound gift offered by the weekend in the mountains. Not merely to a new group of kind and welcoming people, but to myself and to the healing knowledge that I could step into unknown waters and be pleasantly surprised, even empowered. I had entered a space where time was dedicated to being rather than doing. There was no agenda, nothing was transactional.

Before leaving, I choked up when thanking Anna for her warm welcome and generosity. "You don't even know me,” I said.

She wrapped her arm around my shoulder. "It's amazing here in the summer," she replied. "You'll see."