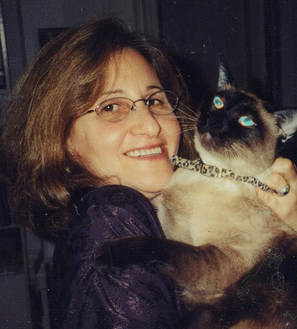 Diana Freedman-Shea is the current president of the New York Society of Women Artists (NYSWA) which was founded in 1925. She received her BFA from Pratt Institute and an MFA from Brooklyn College. She taught in New York City high schools for 34 years and was an art reviewer for a decade. Now retired, she devotes all of her time to making art.
Throughout her career she has explored representation with an eye to abstraction. The subject matter has varied from animals, to figures, to cityscape and landscape. She has exhibited at the Bronx Zoo, the Wisconsin Primate Center, the Prince Street Gallery (Diana is a member there), Noho Gallery, Kennedy Gallery, NYC, The Minnesota Museum, The Hammond Museum, The Katonah Gallery, The Flinn Gallery, The Interchurch Center, and many other venues.

The New York Society of Women Artists (NYSWA) was founded in 1925, and, at that time, the organization had 23 painters and sculptors, all recognized as professionals. The society offered support and exhibition opportunities to members who had won Guggenheim Fellowships and had been engaged with the Federal Art Project, a New Deal program (1935-1943). The support of women artists in a largely male profession gave the individuals more clout. In 1987, ACA gallery commemorated the organization with an exhibition and catalogue.

Today, NYSWA is an intergenerational organization of 46 active members. Many began to make their mark in the 1960's, in the heart of New York City life. NYSWA aims to maintain a clear focus on art itself and, more specifically, on making public the fine works of talented women, in galleries, cultural spaces, museums, embassies and other quality venues. With its illustrious past, awareness and vitality, NYSWA aims to be the eye of the hurricane to support and inspire women artists in the context of this every-changing profession.

NYSWA's refined jurying system welcomes both diversity and quality.
Myrna Beth Haskell, managing editor, visited PaintCan Studios in Long Island City, a neighborhood in Queens, NY, where Diana Freedman-Shea and several other members of NYSWA have studio space. Myrna talked with Diana about the organization’s plans, her role as president and the inspiration behind her artwork.
We have openings and opportunities for artists to talk about their work. We also occasionally have guest speakers at our meetings. It’s a great group of women who have multi-faceted pursuits and yet put their energy into collaborating with this organization.
The hardest – no, scariest – part for me is spending other peoples’ money. I went into contract with the George Billis Gallery for an exhibition and suddenly felt panicked once I had signed. This exhibition would include works by 40 artists. I admire the esthetic of this gallery, which is leaving a lot of white space in between works. I started thinking, ‘There’s not enough room for all of these artists!’ Let me tell you, it’s hard to hang so many artists’ works cohesively to begin with. A fellow member helped me through this one - she helped assuage my anxiety - and it all worked out.
I am thrilled to have this responsibility. The members are very special people, and I feel honored to work with them. We’re all volunteers, but it’s not hard to find help. Members work their tails off with some of these shows. We have some who are just phenomenal at delegating responsibility which makes things easier, too.
I was working at Stuyvesant High School at the time and called in to say I wouldn’t be coming in – the bedlam had already started. Can you imagine? I’m calling in to say I can’t work. You’re just in a daze. That day affected us all so very deeply. I had painted a lot of cityscape views from my old studio. I was inspired by the view of the city as I was on the 84th floor of Tower II. 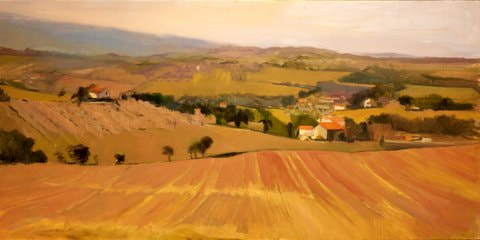 Landscapes Series
Oil on Canvas
© Diana Freedman-Shea
We’re asking all of the women we interview to tell us where they find their sanctuary – where they find joy, peace, strength and fulfillment. We’re using #WheresYourSanctuary to share readers’ responses and inspirational video, stories and photos. So, what feeds your soul and fuels your fire?

I have a couple – in reading, drawing and painting. You’ll see with my paintings that I don’t often have people in them. I’m not anti-social or anything, but painting is a way to escape from everyone. You’ll notice I have many aerial views – looking down at landscapes or cityscapes from a high perspective. I am in a quiet place, away from the noise.
- - - - -
*September 11, 2001: The day of the infamous terrorist attacks on the World Trade Center and Pentagon.

**IFAW was founded in 1969 in Canada and in the UK in 1981. The organization aims to save individual animals, animal populations and habitats all over the world. With projects in more than 40 countries, IFAW provides hands-on assistance to animals in need.