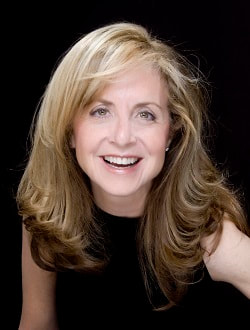 Nikki Feirt Atkins, M.D., is a former dancer, pathologist, and founder and producing artistic director of American Dance Machine of the 21st Century (ADM21).
​
Nikki studied ballet as a scholarship student at New Jersey Ballet and the Joffrey Ballet School in New York, where she performed briefly with the Joffrey Ballet. In addition, she studied Graham, Horton, East Indian dance (Bharatanatyam), jazz with Matt Mattox, Luigi and Betsy Haug with whom she performed. Nikki also studied with Lee Theodore, founder of the original American Dance Machine, who had a profound influence on Nikki.

While working as a part-time pathologist in private practice, Nikki became involved in several dance projects, including Executive Director of the Joffrey Ballet School in New York and working with director and choreographer Chet Walker on projects including the founding of The Jack Cole Project.

ADM21 is a 501c3 nonprofit organization founded in 2012 by Nikki Feirt Atkins. The organization is dedicated to creating a living and vibrant archive of classic and current notable musical theater choreography. ADM21 is continuing the legacy of the late Lee Theodore, a noted Broadway dancer, choreographer and director, who established The American Dance Machine in 1976 as a “living archive” of musical theater dance to address her belief that “many great choreographic works are lost with the musical they once embellished.” Of concern was that the artistry, nuance and intent of each dance would vanish with the artists who created them. The need to properly hand them down by either the living choreographer or the dancers on whom the choreography was set was crucial so that the original nuance and intent would not be lost over time.
​
American Dance Machine for the 21st Century strives to be a leading center for musical theater dance and to perpetuate the excellence of this genre through the education, preservation and presentation of classic and current notable works of musical theater choreography. ADM21’s educational program has been established to inspire and enrich musical theater dance students and budding choreographers in the development of distinctive artistic expression through an expanded course of dance instruction, uniting the work of musical theater's founding choreographers and teachers with current styles and trends.
Myrna Beth Haskell, managing editor, met Nikki for lunch in Manhattan and spoke with her about her journey as a dancer, the illness that ended her dance career and her desire to inspire young dancers and choreographers.

Let’s talk about your journey in the world of dance.

I started at age three, at a dancing school that had ballet, tap, acrobatics…then serious ballet around the age of 7. I studied at Garden State Ballet with Fred Danieli, a former dancer with New York City Ballet, and I just fell in love with ballet! I later studied with Carolyn Clark at New Jersey Ballet. But I also loved the sciences.
​
So you had an exceptional aptitude in both areas?

Yes. But my mother told me she wanted me to be a doctor…that dancers were 'prostitutes.'

Laughing.  She wanted me to be an arts patron, NOT an artist - she certainly took me to many performances. But I kept dancing. I began pointe work at ten years old. [Pointe work: When a ballet dancer supports all body weight on the tips of her toes with a fully-extended foot within pointe shoes.]
​
And that was hard on your feet, right? Any long-lasting issues?

I have terrible back issues after gymnastics and dance. What we do to our bodies...

No kidding.
Did you have a female mentor in the dance community?

Meredith Baylis, a former ballerina with Ballet Russe de Monte Carlo, was a mentor of mine while I was studying at Joffrey. She was so strict! Laughing. I can still see her tapping her cane during class.

Your professional dance career ended early, and you wound up pursuing a career in medicine after all.

Well…this is a big part of my journey. I had a severe eating disorder…anorexia at first. I also suffered from bulimia. I was starving and binging. I would look in the mirror and see a 300 pound woman.
​
It started for me when I was about 14. There wasn’t a lot of awareness about it back then. I think it was around 1970 when there was a feature piece in New York Magazine that shed a light on it. I suffered for years. I was in and out of eating disorder clinics and hospitals while I was trying to have a dance career.

​Did anyone notice what was going on?

I was captain of the majorettes in high school, and when my gym teacher saw me in my uniform after summer vacation, she was horrified. She said that I looked like I came from Auschwitz. My instructors at Joffrey were aware that something was wrong as well.
Nikki became a pathologist, but her love of dance never waned. ​

You know…when I stopped dancing…I felt like the artist in me had been ripped out of my heart. For many years I could not even watch a dance performance. It was too painful. Later in my medical career, I started to become involved with dance projects while I was a practicing pathologist, such as The Jack Cole Project [The Jack Cole Project was a revue built mainly of reconstructed Cole numbers from Hollywood musicals.] Jack Cole was considered the ‘Father of Modern Jazz.’ I also did work with the Joffrey Ballet School. [Nikki was Director of Development, Outreach and New Artistic Programs in 2007 and 2008.] The company had moved, but the school stayed here in New York.
We are focused on preserving great works of musical theater choreography with the nuances and intent with which they were created. When a show closes, the script and score are preserved. The dances remain in the muscles and minds of the dancers who performed them. Since approximately 1969, shows began to be filmed, but you can’t fully recreate choreography from film – you can get steps and counts, but not the nuance and intent of the choreographer that brings the work to life. So we brought in the choreographer, if living, or the dancers on whom the choreography was staged to teach our current generation of dancers.* What we’re doing is creating a ‘living archive’ of these notable classics. It’s all about preservation, presentation and education.

Actually, it’s about inspiration, too. We are dedicated to inspiring young choreographers and dancers – for them to learn from the greats and then find their own way.

​*Prior to the late 1960s, Broadway musicals were not filmed. The books and scores of shows were preserved for posterity, but the dances within these shows ran the risk of being lost. ADM21 continues Theodore's vision while simultaneously inspiring today’s young creatives.
​My favorite choreographer is Bob Fosse. Do you have a favorite?

To develop a solid and comprehensive education program.

While having an MRI – complete solitude!
​
This got us both laughing.