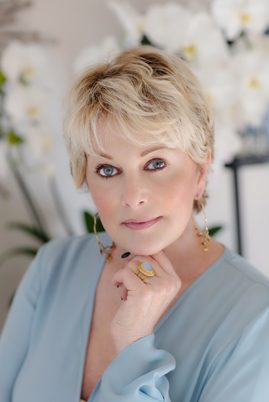 During her modeling career, she graced the covers of every major fashion magazine, including Vogue, Harper's Bazaar, and Cosmopolitan. Cristina co-hosted AM Los Angeles, the highest-rated morning television show during her five-year tenure, and also hosted Cristina and Friends and Home and Family. She was a substitute co-host on Good Morning America and co-hosted with Regis Philbin on Live with Regis and Kathie Lee. Her primetime series for CBS, Shame on You, was one of the first magazine format shows that featured consumer fraud and awareness. She was featured in a series of cooking segments on Oprah.com titled Cooking with Cristina.

Her books include Cristina Ferrare’s Family Entertaining (St. Martin’s Press), Okay, So I Don’t Have a Headache (Golden Books), and Realistically Ever After (Rodale Books). Her latest cookbook, Food for Thought (Post Hill Press), which is excerpted in this issue of Sanctuary, teaches readers how eating the foods you love can keep you healthy, vital and strong.

Currently in remission after being diagnosed with multiple myeloma in 2016, Cristina has since co-founded Flourish with her daughters Arianna and Alex. Flourish is committed to the health of body, mind and soul with environmentally friendly products that help people flourish in their everyday lives.
​
Cristina lives in Southern California with her husband, entertainment executive Tony Thomopoulos. They have seven children and four grandchildren.
Myrna Beth Haskell, managing editor, spoke with Cristina about her passion for cooking, her multiple myeloma diagnosis and her plans for the future.

Tell me about what you were focused on a few years before your cancer diagnosis.  What did you foresee in your future at this point?

I had been working for the Home and Family Show [Hallmark Channel revamped the show from its original run on the Family Channel], a two-hour, live show that was broadcast every weekday. I loved it so much! I adored the people I was working with. I was in the moment…lost in the whole thing. That’s all I concentrated on. I wasn’t sure what the next chapter was…if God was to pull me in another direction…then so be it…but I was in the here and now. However, I always knew that I was going to continue to write books.

Then, in 2016, you were diagnosed with multiple myeloma.* Can you tell me how this changed your life’s trajectory?

Shortly before my diagnosis, I was fired from the Home and Family Show after more than four years. I was told out of the blue that I needed to take a week off. I was thinking…why do I need to take off? I knew this was odd, but I went ahead and took the time. Then, I got a call. They wanted a younger host and said that the show would go in a new direction. [Debbie Matenopoulos, who worked as the resident lifestyle expert, was promoted to co-host with Mark Steines.] I didn’t understand. Our demographic was not the millennial crowd. The viewers were home during the day. I didn’t have time to say goodbye. I had a really difficult time digesting this…it was so abrupt…I was devastated.

During this time, I kept feeling like something was wrong with me. I couldn’t get over this extreme disappointment…I couldn’t stop crying. Something was really off. I was out grocery shopping one day with my husband, and I was developing this terrible headache. I told him, ‘I don’t feel well.’ I actually felt like I was going to collapse. We wound up at the emergency room. After some tests, the news really hit us hard. My husband started to cry…this was serious. I was told there was a two to five year survival rate. I rejected that. It’s not that I didn’t believe the statistics…I just somehow knew they weren’t for me.

This whole experience shocked me into getting my focus back. I had always operated with the attitude that ‘the glass is half full, not half empty.’ I just moved forward knowing that I would deal with it and not feel sorry for myself. I decided right away that I would have the stem cell replacement, and I wasn’t afraid. When you face your own mortality, you experience the power of forgiveness. Your body needs the positivity. When you’re angry and can’t forgive wrongs, it affects you physically.

*Multiple Myeloma is a cancer that forms in a type of white blood cell called a plasma cell. Plasma cells help you fight infections by making antibodies that recognize and attack germs. Multiple myeloma causes cancer cells to accumulate in the bone marrow, where they crowd out healthy blood cells. Rather than produce helpful antibodies, the cancer cells produce abnormal proteins that can cause complications. (MayoClinic.com)

We have an excerpt from your new book Food for Thought this month. Tell me about the inspiration behind this publication. ​
I read that your mom passed away after suffering with Alzheimer’s disease, and Maria Shriver lost her father to the disease. I can empathize because I watched my grandmother deteriorate after being diagnosed. What types of foods should someone avoid? What should a diet include instead?

After the stem cell replacement in 2017, I spent a lot of time at home doing more research for the book.

Good overall health starts with a healthy gut! Genetically modified foods play havoc in the body.* It puts the cells in your body on overload, and this is how tumors can start. Avoid processed sugars and saturated fats – both cause inflammation which is your body’s enemy. [Cristina writes in her book, ‘When sugars are refined, they are depleted of any nutritional value including vitamins and minerals. All that is left is refined starch and carbohydrate, which the body is unable to utilize.] Use sugar substitutes such as monk fruit sweetener.** You can use ghee*** as a substitute for butter.

I did a segment on The Dr. Oz Show where I talked about food that looks like body parts and how these foods actually feed the part of the body that they visually imitate. He was so impressed with the work I had done on this. For instance, a walnut looks like a brain – the left and right hemispheres – and are so very healthy for you. They are high in omega-3 fatty acids, which support brain function. Adding walnuts to your diet can improve overall cognitive function. They also help to prevent cancer. Carrots look like the eye when they are sliced – the iris and pupil – and contain vitamin A which promotes eye health. A tomato looks like the chambers of the heart. Tomatoes help relieve stress, and stress is a bad thing for dementia. They also lower LDL (your bad cholesterol). Sweet potatoes look like your pancreas. Sweet potatoes have beta carotene and antioxidants which protect tissues in the body from damage, and they also work as an anti-inflammatory. I have a whole section on foods that look like body parts in the book!

Here’s another thing. People are still drinking soda, and this drives me crazy. Start eating food that’s clean. You can eat food in a way that doesn’t harm your body – no pesticides, no chemicals, no GMOs. More women are dying of heart attacks today than breast cancer. My book addresses many health issues – heart health, brain health and gut health.

*Animal toxicity studies with certain GM foods have shown that they may toxically affect several organs and systems (National Center for Biotechnology Information).

**Monk fruit is native to regions of Southeast Asia, including some parts of Thailand and China. Buddhist monks in the 13th century were the first to cultivate the fruit, which is the reason for its name. Fresh monk fruit spoils rather quickly. Traditionally, people used dried monk fruit in herbal medicines.

***Ghee is a type of clarified butter that’s made from heating butter and allowing the liquid and milk portion to separate from the fat. The milk caramelizes and becomes a solid, and the remaining oil is ghee. It’s also lactose free for those who have lactose intolerance.
One of the themes for our May issue is motherhood. You’re a successful businesswoman, mother and grandmother. Do you have any advice for moms who struggle every day to find work-life balance?

My children are the light of my life. I made sure I sat down with my kids every day – your life will go off-balance if you don’t find the time. I also took the time to regularly connect with my kids in a more significant way. Every six weeks or so, I would take one of my kids out of school in order to spend time with them individually for a few hours. I highly suggest that parents find the time to show each of their kids why he/she is special. The memories you create are priceless.

My passion is to continue with food, nutrition and health – I want to do it in a way so that people will stop and listen. I’ll also continue to work on the fight against Alzheimer’s and with the Multiple Myeloma Foundation to help raise awareness and funds. I’ve been offered a couple of television projects. Of course, there’s also Flourish which we plan to expand.

I live near a lake. I take a walk down there to the dock for morning prayers. There’s no traffic…I just listen to the morning sounds…the ducks and the geese.
Flourish Website
Find Cristina on: