A Passion for History, Art & All that is Salmagundi
Interview with
Elizabeth Spencer
Artist & President of the Salmagundi Club 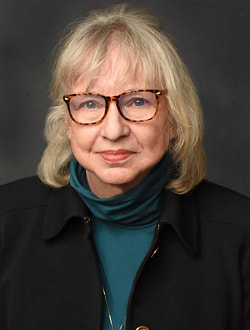 About Elizabeth:
Elizabeth Spencer is the current president of the Salmagundi Club and a practicing full-time artist. She works mostly in watercolor and oil. Elizabeth teaches painting classes at Salmagundi and at her studio in Union Square. She has been a member of Salmagundi since 2004, serving on the board and in many other leadership roles for several years before being elected president in 2019.

Elizabeth has been painting and exhibiting for over 20 years. Her education was primarily at Carnegie Mellon University, Parsons School of Design and The Art Students League, where she is a Life Member. She has studied with Max Ginsburg, Daniel Greene, Richard Pionk, Nelson Shanks, Mary Beth McKenzie, Peter Cox, Frank Arcuri, and other notable artists.​
Myrna Beth Haskell, executive editor, met Elizabeth for a comprehensive tour of the Salmagundi Club on April 9th. At that time, the first of two annual art auctions to benefit the club and its programs was being held. Elizabeth's pride in the organization - its long history, the architectural beauty of the building, and the renowned artists who have graced its halls - was very apparent as she pointed out the varied and unique collections, galleries and gathering spaces.

​What a Special Tour (Editor's Notes): Salmagundi adopted its present name after Washington Irving published his potpourri of wit and wisdom called "The Salmagundi Papers". The club's extensive, historic art collection is housed in a building which is also a marvelous piece of art. A visitor's first glimpse is of the main hallway and the ornate staircase leading to the library and the upper gallery. But Elizabeth, Jeff (Jeffrey Friedkin, board member), my husband, Kirk, and I headed straight to the main gallery where last-minute preparations were being made for the club's spring auction being held later that afternoon.
You are the third female president, correct? Do you know when women first became members?

Yes, I am. My friend, Claudia Seymour [president from 2007 to 2013] was the second female president. Salmagundi was originally a male-only club, and the first women members were admitted in 1973. I think there were just one or two back then. Now, I believe we have more female members than male members. Total membership is over 1,000.
​
Ruth B. Reininghaus was the first female president from 1983 to 1987, and Margaret Sargent was the first female member.
If anything, I feel there is even more camaraderie among us. It has been truly wonderful to see the faces (live) that belong with the names on our roster, even though some of these members may live thousands of miles away.

What are some interesting notable programs the club has hosted?

Some notable programs before COVID have included a delightful presentation by Master Portrait Artist and Salmagundi member John Howard Sanden about his discovery of a Norman Rockwell forgery that had hung for years in a notable museum. Another presentation by Richard Ormond about his great uncle John Singer Sargent’s charcoal portraits that were concurrently a block buster hit at the Frick Collection was also terrific.

What are some of the membership benefits?

We have some non-member shows, but mostly member-only shows. The opportunity for artist members to submit to 10 or more juried exhibitions throughout the year in this gorgeous, historic location is a big plus.

These exhibitions include the Members' Annual Exhibition, the historic Black and White Exhibition, an SCNY tradition since the 1870’s, the Holiday Thumb-Box Show and Sale, and the fundraising auctions. Elizabeth explained that many of Salmagundi's shows are now being posted to Artsy for greater exposure. Members also have private access to much of what the building has to offer, including use of the library.*

Over the years, I’ve met wonderful people here whom I now consider my friends.

What makes Salmagundi different from other art clubs?

It’s not simply a place to show your work. There’s a happy and warm atmosphere, and we appreciate what we have here. It gives us all a common cause. Members schedule private meetings here. They come to read and relax or to have dinner [due to safety precautions during the pandemic, the dining room and bar are currently closed]. It’s a special place. There is something going on in the air in this building – the history and all the events that have happened over the course of so many years is tangible.

Also, it was our honor to sponsor an incredibly moving program and donate exhibition space to veterans who are using poetry, art, music and dance in an effort to overcome PTSD.*

*The “From There To Here: Military Veterans' Experiences” exhibition at Salmagundi [which concluded on February 21, 2020] included fine art, photography, poetry and a dance performance by a member of the Exit12 Dance Company. Eligible artists of this special program are current or past members of the U.S. Armed Forces, the Reserve Corps of the U.S. Armed Forces, or the National Guard. Members of their immediate family were also eligible to present work.

Any plans for the 150th anniversary?

Right now, we are in wait and see mode. We might have something early next year.