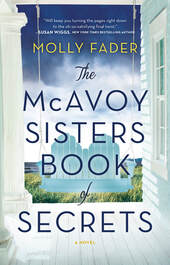 On instinct, she got to her feet. Suddenly after so long, there was Delia, Lindy’s dark-haired sister with the broad shoulders and piercing eyes. The baby carrier in her hand swayed back against her legs, the baby inside shrieking like she was having a good time.

“Delia.” Lindy’s voice cracked when she wished it wouldn’t.

“Lindy.” Delia smiled, the cheerful, bright girl she’d been revealed herself, so familiar and so beloved it hurt.

“You, too. You look -” Lindy braced herself as Delia’s eyes skated over her, raked really, as if trying to pull at her clothes, finger through her hair. Like when they were kids and Lindy would climb into Delia’s bed and Delia would put down her book and in the light of her little reading lamp brush out Lindy’s hair, all matted from the water and sand. On that bedside table, Delia’d make a little stack of the stones and shells she’d find in Lindy’s curls. Summer relics of a life lived by the lake.

Delia rolled her eyes, her hand going to her hair. She looked like she could use some sleep. And some sun. A drink or six. But where it counted - she was still Delia.

“I get it,” Lindy said, waving it off. Forgiving Delia before she even had to apologize, an old skill resurfacing.

“She’s inside, getting chips.”

“She’s not supposed to be having chips!” She set down the baby carrier. “Or mayo for that matter.”

“Well, maybe I would know that if I had known my mother had a stroke.”

That slowed Delia’s roll and she had the good grace to look guilty.

“Were you going to tell me?” Lindy asked.

“I was,” Delia said. “But the baby and then Mom, and Brin’s been in so much trouble. I can’t…” She stopped talking mid-sentence. Like her batteries had just run out.
It had been a long time since Lindy had seen Delia and she couldn’t claim to be the expert on her sister that she once was, but this version of her sister was paper-thin and exhausted. Lindy’d honed her anger to a fine point on the drive to Port, because for once in the life of the McAvoy sisters, the part of the righteous sister was going to be played by Lindy.

But jabbing at this version of Delia didn’t seem very satisfying.

“I don’t…Which garden is that?”

That had been her sister’s plan since they were kids, lying stretched out head to toe on the couch, snowed in by an Erie squall. Delia was going to name her children after world-famous gardens. Brin was after Brindavan, a garden in India.

Lindy on the other hand was going to name her children after characters on Days of Our Lives. Bo, Hope and Adrienne were going to be beautiful little kids…

The baby let out a great squawk. Dee didn’t even blink, or crack a smile.

Lindy knew that was not a compliment. “Are you going to treat me like this the whole time I’m home?”

Lindy could tell her sister to suck it and drive back to get whatever was left of her underwear on Third Street, but she forced herself to hold her ground. “I’m here for as long as Mom needs me.”

Oh, that old barb. Delia used to wield that like a sword when they were kids. You don’t pick a sister up from band practice on a few occasions and suddenly a girl’s untrustworthy.
“Nothing is more important than Mom right now. I would have been here weeks ago, if I’d known.”

The screen door opened, and as Mom stepped out, a bag of ripple-cut chips fell from her fingers.

“Girls!” She pulled the collar of her Fonzi shirt to wipe at her streaming eyes. Lindy was struck dumb by the sight of those tears, and Delia’s statue stillness seemed to imply she felt the same at their mother’s display. “My girls.” She smiled sweetly and lifted her arms to them, her hands fluttering like birds.

Mom’s step toward them was awkward and her daughters darted to her side.

Lindy got there first, her arm around her mother’s narrow waist, but Mom reached for Dee, too, pulling them both into her body.

A family hug.
​
Meredith’s tears bathed Lindy’s cheek, and when Lindy glanced over at her sister, she saw her suffering the same baptism by grief.