Be a Compounder:
You'll Thank Yourself
March 2018 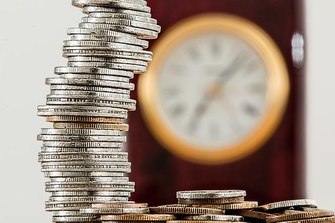 By Nancy Burger
The topic of saving money raises many a neck hair along with fear, insecurity and a host of other uncomfortable sensations. But even if you save just a little each week (think a home-brewed cup instead of a store-bought latte), you can take advantage of what Albert Einstein once referred to as the eighth wonder of the world: compounding.

Put simply, it's interest earning interest. If you invest modest amounts of money even at today's low rates and leave it invested over long periods of time, it can grow exponentially - since the interest you earn each year is added to your principal, the money grows at an increasing rate.

Here's a simple example: One year ago, you put $100 into a savings account that earned $1 in interest. This year, you'll be earning interest on $101 instead of the original investment of $100. It might seem like a minuscule difference, but over many years it can have a big impact — not too different from what happens to a small snowball as it rolls down a hill. The money grows at an increasing rate each year — essentially gaining momentum over time.

Compounding also applies to investing in the stock market. Not, however, by chasing trendy stocks or the "next big thing." Since the prices of shares of stock change from day to day, you don't have the same assurances that your investment will grow consistently and compound the same way dollars invested in a bank account can. But if you do your homework as an investor and find businesses on solid financial footing that seem able to stand the test of time, you can increase your chances of generating consistent returns and of building wealth.

Warren Buffett, one of the world's savviest and most successful investors, has become a billionaire this way. He doesn't look for flashy new companies that promise huge returns in the short run. Instead, he targets well-run businesses that have good prospects and holds the stocks for many years. If you're looking for a quick win in the stock market, you won't enjoy the benefits of compounding. But if you invest in solid companies with strong operations and products — even if you only have a little to invest — you can reap financial rewards years down the road.

This is true, even if you don't have the stomach to buy individual shares of stock. Instead, you can invest in mutual funds, which own shares of a wide variety of different companies, businesses and sectors. It's a great way to own stocks while maintaining a lower level of risk (since you're spreading your exposure across many companies).

The key to compounding, whether it be with respect to a bank account or an investment in the stock market, is in your ability to set aside money and have the patience to let it grow. Even a small nest egg can undergo remarkable growth over time.

Consider this example published by Business Insider: Emily puts $200 per month into a retirement account with an estimated 6% rate of return starting at age 25. Dave starts saving $200 per month at 35, just 10 years after Emily. Both continue to add $200 each month until they retire at 65. 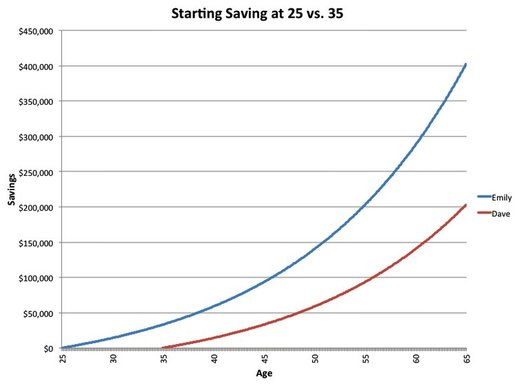 Image Credit: Business Insider
As the graph illustrates, even though Emily started saving just 10 years earlier and put only 33% more in her account, she has almost twice as much as Dave at the time of her retirement due to the ten extra years of compounding (Emily has $402,492 versus Dave's $203,118).

If $200 a month seems like to big a leap, then start smaller. Even $25 a week can make a big impact over time. The amount isn't as important as the discipline — getting into the habit and sticking with it.
Co-founder Nancy Burger started her finance career on Wall Street in the 1980’s and now works as a freelance analyst and writer for a money management firm. She has contributed to articles that have appeared in Forbes.com, Nasdaq.com, TheStreet.com and CNBC.com.