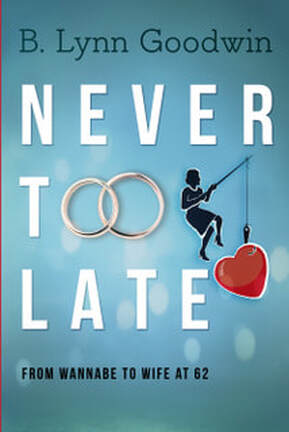 I never dreamed I would marry for the first time at age sixty-two.

When I was eighteen and getting ready for college, I read a statement from the Vassar catalogue.

The phrase - eventually marry - rolled off my tongue. Maybe I wasn’t the only woman who wanted a career, independence, and security before marriage. Maybe my priorities weren’t as odd as they seemed.

During high school, I dated exactly twice. Boys wanted to hang out with the pretty, confident girls. At five-foot-three and a hundred and fifty-five pounds I needed to lose weight. Dieting drove me crazy. No matter what weight loss plan I tried, my stomach growled and I couldn’t concentrate. Why didn’t magazines in the mid-sixties tell girls that intelligence, creativity, and confidence were attractive qualities? Why did I listen to those magazines that told me a thin body would give me success and happiness?

On both of my high school dates, I was incredibly nervous. Irrationally nervous. My mind raced, scrambling my thoughts and potential jokes, until I was ready to scream. Better to keep my mouth shut and be considered a fool, than to open it and remove all doubt.

I was too embarrassed to ask anyone how to act on a date. Instead, I memorized tips from Seventeen Magazine:

Ask him what he’s interested in.
Talk about his teams - basketball, football, debate, chess . . .
Be available, but not too available.

How could I flirt without giving a guy the wrong idea? Where were the lines drawn between a nice girl and a cheap girl?

Even though I opened up a bit in college, my personal feelings remained submerged. My peers talked freely about their dates - so, I gave mixers a try. On Friday nights, the men from Williams or West Point or Yale got on a bus and rode to Vassar. In their dorms, the girls put on mini-skirts and eye shadow and we all met in a building called Students, where a local band played and the men asked the women to dance. If things went well, you spent the evening with the man who asked for the first dance, exchanged phone numbers, and he called by Wednesday to invite you to his campus the next weekend. If things didn’t go well, you stood around and tried to look available and happy or at least perky.

One night as the women on either side of me were selected, I noticed a female techie from the drama department. Wearing a work shirt and drinking a beer, she sat on the edge of the stage, looking as lonely as I felt. Being thin and attractive didn’t help her. What chance did I have? Looking happy and available didn’t work. Neither did looking like your boyfriend was in Vietnam and you were just here for the music.

One night, I danced with a drunken townie, who invited me to his car. After two beers, I thought it would be fun. We settled into the backseat of his buddy’s clunker. He put his lips against mine and pressed hard enough to make my teeth hurt. His tongue reached past them, and circled around my tongue. One hand held my head in place while the other stroked my breast. My polyester dress was lined, but it didn’t matter. My nipples stayed flat. His kisses and hot hands were gross.

A snippet from Seventeen Magazine raced through my mind. “If everyone else is making out, take him out to the kitchen and make him a sandwich.” There was no kitchen anywhere near the car.

“’Scuse me,” he blurted out, and threw the door open. I heard him retching behind the trunk. He got back in, said, “Sorry about that,” before he put his mouth back on mine again.

Pushing him away, I said, “Gotta go.”

“What? Why?” His eyes squinted.

“I have to go and . . . uhh . . . water my cactus.” It was a line I heard in the dining room - guaranteed to get rid of a guy you never wanted to see again. Walking back to my dorm, I felt buzzed and repulsed. And grateful. The author of Seventeen would have been proud of me.

I finally met the man who would become my husband there. His ad in Men Seeking Women read:

1944 classic roadster with many miles left!
Motor humms, transmission smooth and and all the gears work!
Only two previous owners, very great women.
Two tone, white with a gray top.
Seeking a new woman owner who knows how to drive a classic!

Thanks.
PS, This car is at church every Sunday, so if that is a problem with you, this car is not for you.

Obviously, he was shopping for his third wife. Before our first date, he asked if I would ever marry if I fell in love.

Of course I said yes. I would have said yes to any expectation. His questions made me feel like I was interviewing for a job. They also made me curious. Where might this go if I didn’t resist? Besides, after sixty-two years of living single, it probably wasn’t possible for me to fall in love. I wasn’t really tricking him. I was just agreeing. Fears lingered, though.

What if we got in too deeply?
What if I became dependent?
What if he took my life savings and left?
Lynn answered questions about finding love in midlife...

What is a benefit of falling in love and/or marrying in midlife?

I appreciate Richard. I love his company (usually), his humor, his honesty, his family (I never gave birth but have kids and grandkids), and, because we are older, we don’t have to merge our finances which might have caused problems.

Any advice for readers who are still looking for a life partner or have found themselves alone for the first time and want to find love again?

Be open, be honest, listen, be willing to compromise, be yourself, trust, and make wise choices.

Know what you want and be open to compromise. If it’s all about your appearance, consider moving on. If you’re ready to exchange your loneliness for a partner, write a gratitude list of the things he or she says and does that make you happy.