Interview with
Rebecca Edelmayer, Ph.D.
Director of Scientific Engagement at the Alzheimer's Association 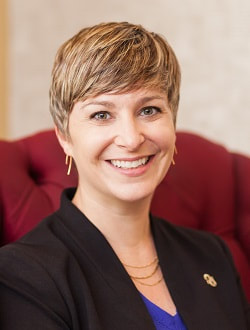 Rebecca Edelmayer, Ph.D., leads efforts to accelerate the scientific agenda of the Alzheimer’s Association through the creation and delivery of ongoing research education. She engages with more than 75 Alzheimer’s Association chapters across the country, ensuring that staff and the public are aware of the importance of medical research and the association’s crucial role in advancing research to improve the lives of individuals living with dementia and their care partners. She also manages initiatives uniting researchers and clinicians with leaders of industry, regulatory agencies and the government on topics related to blood-based biomarker testing, use of digital health technologies and biotech approaches in studying dementia.

Rebecca has over 17 years of experience as a practicing scientist and educator. She spent more than six years as a pharmacologist in the Neuroscience and Immunology Discovery Divisions at Abbott and AbbVie, where she was recognized as an emerging scientific leader. She has lectured, published and led collaborations in areas of neurophysiology, inflammatory skin pathology and pain neurobiology.
About Alzheimer's Association®:

The Alzheimer’s Association was founded in 1980 by a group of family caregivers and individuals who recognized the need for an organization that would unite caregivers, provide support to those facing Alzheimer’s and advance research into the disease.

​Today, it is the leading voluntary health organization in Alzheimer's care, support and research. The association’s mission is to eliminate Alzheimer's disease through the advancement of research; to provide and enhance care and support for all affected; and to reduce the risk of dementia through the promotion of brain health.
Myrna Beth Haskell, managing editor, spoke with Rebecca about the latest in Alzheimer’s disease research, risk factors, and what to do if you suspect a loved one might have the disease.

What does your role entail? Do you spend most of your time in a lab or advocating for funding for important research?

I’ve spent over 18 years as a scientist working in a lab setting – a place I feel at home. But I’m not in the lab as much now because I’m focused on educating and connecting with the public. Organizations need information about where we are with scientific research around the globe as well as the latest research that’s driving drug development.
Is there a specific test for Alzheimer’s today, or do doctors still consider certain behavioral changes and declines in cognitive health? I read that a blood test is being developed.
We are also looking at populations that are most at risk and including people from these populations in clinical trials.
*Plaques are deposits of a protein fragment called beta-amyloid that build up in the spaces between nerve cells. Tangles are twisted fibers of another protein called tau that build up inside cells. There are currently no validated biomarkers for Alzheimer’s disease, but researchers are investigating several promising candidates, including brain imaging, proteins in CSF, and blood and urine tests. Neuroimaging is among the most promising areas of research focused on early detection of Alzheimer’s disease. (Alzheimer’s Association)
I suppose this goes hand-in-hand with the idea of keeping our brains actively thinking.

Are you at a higher risk of developing Alzheimer’s disease if a family member has died from it?

If you have multiple risk factors, you are at a higher risk of developing the disease.

The Alzheimer’s Association has funded exciting advances in research, including the development of Pittsburgh Compound B (PiB).* This was the first radiotracer (or radioactive tracer) capable of showing beta-amyloid in the living brain during a PET scan. Why was this such a breakthrough?

The radiotracer** was used around the globe and was a springboard for other research. It has clinical benefits, such as early or preclinical detection of the disease and being able to distinguish Alzheimer’s from other causes of dementia.

This was developed back in 2001 and was a way to bring the science to the bedside. It was approved for human use in 2012, but is not covered by insurance yet. It was extremely important because it studied the living brain.

*Pittsburgh Compound B (PiB) was the first radiotracer capable of highlighting the presence of beta-amyloid deposits (one pathological hallmark for Alzheimer’s disease) during PET scan. (Geriatric Psychiatry: A Case-Based Textbook)

**A radiotracer is a chemical compound in which one or more atoms have been replaced by a radioisotope. Monitoring its radioactive decay, a radiotracer can be used to explore the mechanism of chemical reactions. (International Atomic Energy Agency)

Part the Cloud, a global research grant program founded by Michaela "Mikey" Hoag in 2012, funds early phase clinical studies. Is the intention to accelerate getting the lab findings into clinical studies?

The focus is on moving out-of-box research and risky treatments from the lab to clinical studies. There are amazing ideas out there – born in academic institutions and businesses – innovative ideas that we want to support. Often these ideas sit in the laboratories and never get the funding needed to progress.* We call it the “Valley of Death” in research. There are ethics reviews and other challenges.

We’ve raised more than 30 million dollars and have had 34 research grants awarded since 2013.**
​Isn’t it true that you also believe in collaboration and sharing information with other organizations and institutions?

The sharing of information is incredibly important. There are people around the world who don’t have access to information regarding lifestyle risk factors, for instance.

GAAIN* is our global interactive network where research results, scientific journals and data from pharmaceutical companies and academic institutions is shared.

GAAIN, funded by the Alzheimer’s Association, continues to improve and expand while reaching out to new potential data partners, developing and refining a comprehensive, efficient platform where investigators can search, access, and analyze Alzheimer’s disease data (as well as data related to dementia and aging) in a collaborative and innovative manner.

I’ve read that there is research being done to study how certain diets can improve memory function.

The two diets that have been studied the most are the Mediterranean diet [foundation: vegetables, fruits, herbs, nuts, beans and whole grains] and the DASH diet [vegetables, fruits and low-fat dairy foods with moderate amounts of whole grains, fish, poultry and nuts]. They’ve had the largest number of clinical trials.

We need to do more research to better understand the effects of diets and how cells use energy in the brain.

NOTE: The MIND diet is a hybrid of the Mediterranean diet and the DASH diet. According to the Mayo Clinic, “Eating certain foods (and avoiding others) has been shown to slow brain aging by 7.5 years and lessen the chances of developing Alzheimer's disease…university researchers developed the MIND diet to emphasize foods that impact brain health.”

Are there any other lifestyle changes we can make that may reduce our chances of getting Alzheimer’s?

There are multiple healthy lifestyle habits people should adopt. Heart health is extremely important. We like to say, ‘What’s good for the heart is good for the brain.’ We’ve seen strong evidence that controlling blood pressure to a systolic pressure of 120 can decrease mild cognitive impairments. Social and cognitive stimulation can help as well. [Cognitive stimulation: activities that stimulate thinking, concentration and memory. Social stimulation: participation in group-related activities, support groups…anything promoting social interaction.]

In addition to maintaining heart health, keeping our brains active, and attending social activities, the Alzheimer’s Association suggests, making your home “fall proof”(brain trauma can increase risk of Alzheimer’s), continuing with a medically-approved exercise plan, and limiting your intake of sugar and saturated fats.
We also have a 24/7 helpline: 800-272-3900.

Note: The Alzheimer’s Association also hosts ALZConnected, a free online community for individuals living with Alzheimer’s, caregivers, family members and friends. This is a place to ask questions, get advice and find support.

​Where do you find sanctuary? (#WheresYourSanctuary)

This might be exposing the nerd in me, but I’m so passionate about medical research. It’s just something I know that I’m meant to do. I love waking up to do what I do each and every day.