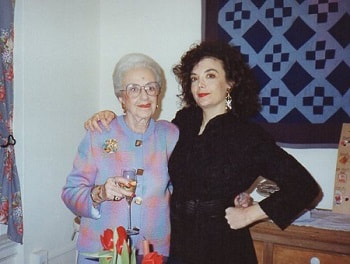 Aimee Lee Ball (right) with Her Mom
By Carol Lippert Gray
Everyone eats. What experience is more universal — and essential — than acquiring, preparing, and eating food? And doubtless every mother in every culture uses some variation of the phrase, “Eat, Darling, eat.”

Thus was born the eponymous website. About four years ago, Aimee Lee Ball, a New York-based journalist and enthusiastic cook, and her brother-from-another-mother Steve Baum, a cinematographer, launched Eat, Darling, Eat to share the stories of mothers and daughters, daughters and mothers, and, as Aimee says, “the centrality of food in our lives.” She also shares, “My mother was an endless source of stories.” Who can’t relate to that?

“Some stories are hilarious. Some are heartbreaking. It’s an amazing spectrum,” Aimee says. “Even if your mother could only boil water or had Sichuan take-out on speed-dial,” there’s a story that encapsulates a relationship and paints a portrait of the protagonists — the good, the bad and the unpalatable.

The Taste of Memory

There are stories about terrible cooks and terrible food served with an elegant flourish, like the linen napkin in a silver napkin ring sitting alongside a TV dinner or Spam. Or the actual Samoan princess who performed ceremonial duties in her native costume but had no idea how to turn raw ingredients into edible food, thus making it hard for her daughter to learn to cook.

There’s the story called “Must Be Gorgeous,” about the writer’s mother who got her job as a cigarette girl in the Drake Hotel in the 1950s by answering a newspaper ad that said, “Must be gorgeous.” She was jaw-droopingly beautiful, gawked at by everyone. Now, though, because she has dementia, she’s stared at for other reasons.

“Some stories reflect challenging experiences,” Aimee says, like the woman born in the former USSR. She lived in a shed; her family grew vegetables. They had to sneak out to the closest cow farm to buy manure for fertilizer. The currency: a bottle of vodka for the guard at the farm.

One woman’s mother was in a World War II Japanese internment camp who made soup of ketchup and water.

There’s the college professor whose mother said she was “too big for her britches” because the mother felt shamed when she measured herself against her daughter’s achievements.

And there’s a story called “Dinner From Dented Cans.” The daughter remembers everything her mother made as being delicious. It was only later that she realized all the ingredients that created those memorable meals had come from a food pantry.

(Full disclosure here: I wrote a story that appeared in Eat, Darling, Eat last March about my family’s history with my banana muffins. Banana muffin recipes also seem to be popular on the site.)​

​What’s On the Menu?

​Contributors to the site have come from six of the seven continents (if you know of a writer/cook in Antarctica, send her Aimee’s way) and, to date, there have been over 500 stories. The youngest contributor is still in high school.
Want to Submit?

Stories are a feast for the senses. Aimee wants contributors to describe the soundtrack of their mother’s kitchen – the music that played while she cooked. What did the kitchen look like? What did it smell like? “Was it a safe place for open discussion, even if Mom was just making a grilled-cheese sandwich? Was it messy or precise? Was she a recipe follower or a more creative spirit? Did the mother recognize that what’s important is time spent together making cookies, rather than perfectly shaped cookies?”

Contributors are asked to record their stories as well as write them. “It’s a different experience when the author reads her story out loud,” Aimee says.

Want to Read or Listen?

Eat, Darling, Eat has produced three podcasts to date. One features Zarela Martinez, who calls herself a “Mexican geisha.” “She was brought up to be a star and became one,” Aimee says. The second is custom baker Sylvia Weinstock, known as “The Queen of Cakes,” and her daughter. And the third features Queens, New York native Nancy Yao Maasbach, the president of the Museum of Chinese in America in New York, whose career relates to the experience of Chinese people in this country.

Aimee says, “It’s so gratifying to be entrusted with these stories and with the photographs from [family] archives and pictures of a mother’s handwriting on recipe cards. It’s a great pleasure to be a conservator of these memories.”
More About Aimee & Two of Her Recipes
Carol Lippert Gray is an award-winning public relations professional and longtime freelance writer and editor. She has been published in fields as diverse as crafts and corporate finance, parenting and philanthropy. She is also a co-associate editor for Sanctuary.
Archives