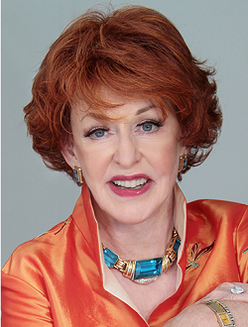 Photo Credit: Michael Gold (The Corporate Image)
About Darlene:
Darlene L. Pfeiffer, a trailblazing, magnanimous entrepreneur, has built a philanthropic and entrepreneurial legacy fueled by her passion for women and education, earning her a spot in the 2013 publication Remarkable Women in New York State History.

In 2016, Darlene’s Kingston KFC franchise won an award for being number one in customer service out of approximately 4,000 KFC restaurants nationwide. That same year, Darlene was honored with a Lifetime Achievement Award from the Association of Kentucky Fried Chicken Franchisees.

Darlene has been strategically involved in numerous charitable organizations throughout the region, regularly giving to community food programs, and as donor and member of the Board of Trustees of the Community Foundations of the Hudson Valley.

​In 2010, Darlene joined the Ulster Community College Foundation, Inc.’s Board of Directors, and in 2012, the Darlene L. Pfeiffer Center for Entrepreneurial Studies opened at SUNY Ulster. At the time, the donation for the center was the largest single gift to the community college by a living donor, earning her recognition from the New York Community College Trustees with the Benefactor Vision for Tomorrow Award.
Myrna Beth Haskell, executive editor, met with Darlene at her home in Port Ewen, NY. Lorraine Salmon, Executive Director of Ulster Community College Foundation, sat in on the conversation as well. Darlene talked about her journey as a Kentucky Fried Chicken (KFC) franchisee, the reasons behind her success, and her passion for giving to others and making her community a better place to live. As the first woman president of the Association of KFC Franchisees (AKFCF), she is tough as nails with a generous spirit and a great sense of humor.

You met Dave Thomas (a KFC franchisee who would become the founder of Wendy’s, a fast-food restaurant chain established in 1969) in Ohio in the mid-1960s. He convinced you to become a KFC franchisee. What did he say that made you excited about the idea?

I was living in Saugerties and bored to death, so I headed to Columbus, Ohio to visit my mom. I couldn’t wait to get to a KFC. At the time, we didn’t have one [in the Ulster County, NY area]. While there, I decided I was going to call the office [to learn more about the business].

Dave met with me the next day. He said, ‘Honey, it’s the easiest business in the world. You’ve got to do it! All you have to do is count chickens.’ He told me I just needed to keep track of the chicken – how much comes in, how much is sold, and how much had to be frozen if it wasn’t cooked in one and a half hours (chicken that didn’t sell was frozen and given to homeless shelters). Darlene laughs. I figured I had been counting passengers as a flight attendant for seven years. I was used to counting.

After meeting with Dave, I later flew down to meet the director of sales, and he told me, ‘You don’t want one. You want five.’ He basically explained that if I was going to go through the trouble of learning the business and starting one, I should open several.

I had saved every penny I could over the years. I had $20,500 to put down. However, the corporate treasurer told me that it wasn’t enough to open five. So, I went back to my accountant. I had some stock, too, and I figured out a way to make it happen.

​In 1966, you could not obtain a loan unless your husband agreed to be a majority shareholder. Things have changed over the years, but businesswomen still face obstacles. Please share an obstacle you faced and how you were able to overcome it.

Well, thank goodness they [the times] have changed!
Well, I responded, ‘I guess you’ll have to deal with me then.’

Then, they tried to intimidate us by threatening to take our annual convention away. I told them to go ahead and take it away. Then, I planned the convention myself. I invited vendors to take out ads and to display their wares. We [Association of KFC Franchisees] wound up making money on this convention…money that could be used for the lawsuit.

I also started a quarterly magazine that was distributed to franchisees throughout the country. We sold ads and informed the franchisees about what was going on with the lawsuit. It kept everyone in the loop.

This lawsuit went on for seven years. I was no longer president when they called me back in to help in the last stretch. They said, ‘We want Darlene back.’

Note: Darlene served two terms as President of the Association of KFC Franchisees. The lawsuit was finally settled with PepsiCo in 1997.

​Finding work-life balance is an issue many women struggle with. How did you manage to complete your degree while running your KFC locations?
Harland Sanders (a.k.a. Colonel Sanders, the founder of Kentucky Fried Chicken) visited you on many occasions. What did you admire about his leadership style?

He originally owned a gas station during the Great Depression, and he would sell his ‘secret recipe’ fried chicken to the truckers that pulled in. That’s how it all started. Word spread fast.

He was a determined man and a very generous man. He also considered his franchisees family.* He was also hands-on and wanted to see things done right. The chicken arrived fresh and was cooked in pressure cookers** that he leased to the franchisees. Gravy was a passion of his, and he would visit locations and show the workers the proper way to make it. If he saw that the gravy wasn’t being made right, he’d threaten to take the pressure cooker away!

*“When Sanders sold KFC, he feared his franchisees would lose control of their own businesses and the future they were working toward. So, he encouraged them to unite to protect the franchisees that he considered part of his own ‘family’ and to give the franchisees a voice in the future development of a concept which would prove to be far greater than was envisioned at the time.” (AKFCF website).

**Sanders was one of the first to use ‘pressure fryers.’ He believed the resulting flavor tasted a lot like using a frying pan. His original fried chicken recipe is still in use today.
Do you have a piece of advice you'd like to share with other women entrepreneurs?

I have three things to share:
You have given back to the community in so many ways, particularly to SUNY Ulster programs. I'm interested in hearing about a program you established called New Start for Women.
Where do you find sanctuary?

Online! Darlene starts to laugh at her reference to Sanctuary magazine.

I find sanctuary in serving God. I wake up every day saying, ‘I’m here. I’m your servant. Just show me the way.’ And he has.

Editor’s note: During our visit, I learned that Darlene has been playing piano since she was a child. She is also an animal lover and shared her plans to take in another puppy. As I was leaving, one of two gorgeous parrots called out, "Goodbye." I was smiling all the way to my car.
Find Out More About Some of the Organizations and Programs Darlene Supports:
Ulster Community College Foundation, Inc.
The Own It! Entrepreneurial Women’s Conference
New Start for Women
Darlene L. Pfeiffer Center for Entrepreneurial Studies