Now that You Mention It
(HQN Books)
© 2017 Kristan Higgins 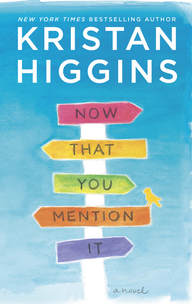 Slightly out of breath, I got to the end of the dock and patted my dog’s head. A seagull landed on a wooden post, and Boomer woofed softly. Otherwise, the island was quiet, and ominously so, like one of Stephen King’s towns. I missed the cheerful duck boats of Boston Common, the elegant shops of Newbury Street. Here, nothing was open.

Scupper Island Clam Shack, where I had worked for two summers, sat at the end of Main Street, right on the water. It wouldn’t open until Memorial Day, if it was the same as it used to be.

I’d worked there with Sullivan Fletcher, one of the two Fletcher boys in my class. Sully had been in a car accident our senior year shortly before I left Scupper, and I wondered how he was. I’d wondered often over the years. Word had been that he’d recover, but I’d never asked for details (nor was my mother the detail type).

I looked to my right, and there was my mother’s elderly Subaru turning onto Main Street. I waved, not that she could miss me; I was the only one here. She pulled over, turned off the engine and got out, looking the same as ever, and unexpected tears clogged my throat. “Hi, Mom,” I said, starting to move forward for a hug.

She nodded instead, then hefted my two suitcases into the back of the car. “I didn’t know you were bringing your dog,” she said. Boomer wagged his fluffy tail, oblivious. “He better leave Tweety alone.”

Tweety was Mom’s parakeet (and favorite creature in the world.) “Tweety’s still alive, then?”

“Of course he is. Where’s that dog gonna sleep?”

“It’s good to see you, too, Mom,” I said. “I’m fine, thanks. In a lot of pain, actually, but doing okay. After being run down in the street. By a van. Sustaining many injuries, in case you forgot.”

Boomer jumped in at the magical words, filling the entire backseat.

A thickly built woman with hard yellow hair approached our car. “Hey, Sharon. Who you got there?” Who y’gawt they-ah? Good to see the Maine accent was alive and well. The speaker was Mrs. Hurly, mother of Carmella Hurly, one of the mean girls from high school. I’d called them the Cheetos back then (not aloud, of course)—the popular, mean girls who’d go to Portland to woo cancer at tanning salons, resulting in a skin tone not found in nature.

Her face hardened. Right. I was not an islander who had brought pride to my hometown. I was the girl who stole the prince’s crown. Also, I looked a lot different from the olden days, when I’d been a fat, lumpy teenager with bad hair and worse skin.

It would soon be all over town that I was back.

Mom got into the driver’s seat, and I flopped gracelessly in mine, ass first, bumping myself in the face with the crutch.

“So how is Carmella?” I asked, fastening my seatbelt.

“Good. Five kids. Cleans hotel rooms in the summer, bartends at Red’s. Hard worker.” Hahd wehrkah. Man, I guessed my accent had faded more than I realized. That, and I hadn’t talked very much to my mom these past few years. Perfunctory phone calls, her annual twelve-hour visit to Boston.

“You’ll be sharin’ your room with Poe,” she added.

“Well, where do you think she’s sleepin’?” Mom pulled away from the curb.

Good point. I suppressed a sigh and looked out the window. Main Street had gentrified a bit. There was a bookstore I’d never seen, called The Cracked Spine. Cute name. Lala’s Bakery, which would have a line around the corner every day in the summer, was fairly deserted now. A kitchen goods store. Huh.

“How is Poe?” I asked. I hadn’t seen my niece for five years.

“Mom, could you actually tell me?” I snapped. Five minutes, and already I was irritated.

“She’s grumpy. Hates it here.” She turned on to Perez Avenue, renamed for the man who’d sent a Scupper Island kid to college every year for the past quarter century…including me. We passed the ubiquitous made-in-China-souvenir shop, unimaginatively called Scupper Island Gift Shoppe (I always hated the spelling), a restaurant I’d never seen, an art gallery, another restaurant.

We’d never be Martha’s Vineyard—too far, too cold, too small—but it seemed my hometown had blossomed.

“Did things go okay in Seattle?” I asked, referencing my mom’s recent visit to fetch Poe.

Of course. Look on the dark side, that was my mother’s motto. She didn’t approve of panhandling, having grown up poor herself. But her version of poor was scrappy. It meant hunting and fishing for your food if you had to, knowing how to put up the vegetables from your garden, dry fish, smoke meat. If you didn’t have something, you made do.

“And how is Lily?” I asked, when it became apparent my mother wasn’t going to mention her.

My mother’s gaze didn’t stray from straight ahead. “She’s in jail, Nora. How do you think?”

I took a slow breath before speaking again. I knew she was in jail. My mom didn’t have to be an ass about it. “Is she doing okay? Did you see her?”

Fine. Really? Was she devastated? Heartbroken? Remorseful? Angry? She was probably angry. She had been for the past twenty-four years, at least as far as I could tell. Since the day our father left.

Within three months of landing in Seattle at the age of eighteen, Lily had gotten tattooed, pierced and pregnant. She had a series of boyfriends; I had never met Poe’s father, and to the best of my knowledge, neither had Poe. Lily’s job history was spotty—barista (of course, it was Seattle), band manager for a local group, temp, barista again, tattoo artist.

My sister was also a petty criminal. Identity theft, credit card fraud and drug dealing, though the legalization of marijuana had put a dent in her business. I hadn’t known about any of that until last month, when my mother told me she had to fly out and get Poe, because my sister had been sentenced to two years, out in August with good behavior.

Beantown Bug Killers had given me a plan. Stay on Scupper until Lily got out. Then she’d either come East to fetch her daughter, or I’d fly back with Poe. And I’d…fix things.
How, I wasn’t sure.