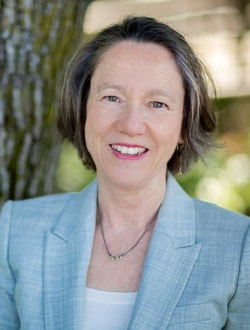 Julia Brody, Ph.D., is executive director and senior scientist at Silent Spring Institute. She is a nationally recognized expert on environmental chemicals and breast cancer as well as a leader in community-engaged research.

Julia’s research has been supported by the National Institutes of Health, the California Breast Cancer Research Program, and the National Science Foundation. Along with other Silent Spring scientists, she published a landmark 10-year review of epidemiological studies of environmental chemicals and breast cancer, including evidence about early life exposures to DDT, air pollution, and solvents at work.

The U.S. Environmental Protection Agency recognized Julia’s research with an Environmental Merit Award in 2000. In 2002, she presented one of the Distinguished Lectures at the National Cancer Institute and spoke at the 2009 President’s Cancer Panel where she highlighted the need to integrate biological evidence with human studies to prevent cancers.
Julia has served on the National Advisory Environmental Health Sciences Council and is currently an advisor to the California Breast Cancer Research Program and breast cancer activist organizations. She is an adjunct assistant professor at the Brown University School of Medicine.
Myrna Beth Haskell, managing editor, had the opportunity to talk with Julia Brody, Ph.D., about the Silent Spring Institute’s cutting-edge research which draws light on environmental links to breast cancer rates.

I read that members of the Massachusetts Breast Cancer Coalition were alarmed by elevated breast cancer rates in Cape Cod, MA. They saw a need to investigate environmental causes after realizing that prior clinical research had not helped to decrease the rise in cancer rates. Can you explain?

Even now, there is very little funding going to the causes of breast cancer.
**Groundwater is the source of nearly all of Cape Cod’s drinking water and most supplies show some wastewater impact. Septic systems were designed to prevent bacterial contamination of neighboring water supplies and do not appear to be effective at removing these types of contaminants from wastewater. (Silent Spring Institute Report, 2006)
Long Island, NY is also a place that has shown elevated rates. Its topography is similar to Cape Cod. Is there something about these narrow stretches of land that cause higher rates of breast cancer than inland areas?

*The Long Island Breast Cancer Study Project, November 2004, found that PAHs were associated with a modest increased risk for breast cancer, which will need to be confirmed in studies of other populations. It also found that PCBs** may be associated with an increased risk for recurrence of breast cancer, which is being investigated further. (US Department of Health and Human Services)

**PCBs are man-made chemicals resistant to extreme temperature and pressure which were widely used in electrical equipment, lubricants, plasticizers, and as components of surface coatings and inks.

It’s important to know that only five to ten percent of breast cancer occurrence is due to high risk BRCA genes (BRCA1 and BRCA2).* Age is a risk factor. [According to the Centers for Disease control, most breast cancers are diagnosed after age 50.] Longer lifetime menstruation is also a risk factor; for example, early menstruation (onset before age 12) and late-onset menopause (onset of menopause after age 55).

We also know that we have control of some risk factors. Reducing alcohol consumption, increasing physical activity, and avoiding hormonal replacement therapy (HRT) are ways to decrease risk.

Keeping dust levels low is also important. Dust contributes substantially to exposure to chemicals. We tested in-home air and dust from residences and established the presence of phthalates, alkylphenols, and other hormonally active compounds that may affect health. To reduce risk, use wet wipes or damp cloths to remove dust and use a high efficiency vacuum. (Kids are more susceptible because they put things in their mouths and eat the dust.)
​
*The BRCA gene test is a blood test that uses DNA analysis to identify harmful changes (mutations) in either one of the two breast cancer susceptibility genes - BRCA1 and BRCA2. People who inherit mutations in these genes are at an increased risk of developing breast cancer and ovarian cancer compared with the general population. (MayoClinic.org)
**Silent Spring Institute’s Detox Me app draws on more than 20 years of research on the health risks associated with toxic chemicals in our everyday environment, turning this vast knowledge into practical advice for healthier living
What is the Detox Me™ Action Kit?

It’s a crowd-sourced biomonitoring study. The participants collect their own urine samples and pay for their personal lab analysis. The urine is tested for common endocrine disruptors. The participants receive a full report that compares their personal results with the results of all others in the study. The results are folded into our research and the data is analyzed.

It’s on hiatus right now. It will re-open later this year.

For more information and to be notified when enrollment begins again, click HERE.

Are there any future projects or research studies the organization is planning?

We are developing ultra-fast, chemical screening methods that will allow researchers to test large numbers of chemicals at once and zero in on those most likely to increase breast cancer risk. There are thousands of chemicals that haven’t been studied yet. We want to be able to quickly evaluate chemicals and determine those that shouldn’t be in consumers’ homes.

The next step: Organize the data so that we can alert manufacturers, retailers and policy makers.

I feel really privileged to work at this institute. It’s a women-led team. This group of scientists is extremely dedicated to the mission.

In my garden. I love being out there. It’s very calming for me. Laughing. I have a great cucumber crop out there right now.