Interview with
Elca Grobler
Founder of My Choices Foundation 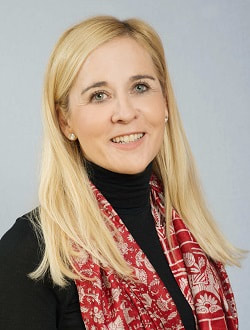 Elca Grobler, founder of the My Choices Foundation, left a career in investment banking and finance in 2011 to follow her calling – serving women and girls in India by working for their empowerment. Since its founding in 2012, the My Choices Foundation has grown to become a national leader in addressing domestic violence and sex trafficking in India. It has been recognized internationally for the ingenuity and impact of its work.

Under Elca’s leadership, the foundation has helped to peacefully resolve over 8,828 cases of domestic violence and has equipped over 2.3 million individuals, those living in high-risk areas across eight states, to stay safe from sex trafficking. Through its anti-trafficking initiative, My Choices Foundation has established the first national helpline exclusively for trafficking and is leading the coalition effort to prevent sex trafficking.

Elca’s numerous honors include being awarded one of the “50 Most Impactful Social Innovators” award and the AGSM Alumni Award for Social Impact and Public Policy for her work in India. She was also recognized as one of the “100 Most Impactful CSR Leaders” by World Sustainability Congress and World Federation of CSR Professionals for three consecutive years (2018, 2019, and 2020). The Red Alert Research Paper, which she co-authored with behavioral architects of Final Mile, won the 2016 ESOMAR Award for Excellence in market research and has become a seminal document for anti-trafficking program development.

My Choices Foundation has been recognized for its creative campaigns addressing gender-based violence, and in 2017, the foundation created the world’s first VR documentary on sex trafficking. Notes to My Father was showcased at Sundance Film Festival and made its world premiere as an Official Selection at SXSW Film Festival in March 2017.
Through the porthole of modern technology, Myrna Haskell, executive editor, was able to talk to AND ‘see’ the leader responsible for helping to protect an extraordinary number of women and girls in India. Elca discusses why both domestic violence and sex trafficking is so prevalent in India and how her foundation has developed sustainable programs that reach entire communities.

You’re originally from South Africa and your education and career focus was in the finance sector. How did you wind up in India as a nonprofit leader?

Our first move was to Sydney, Australia…then to India. I worked in consulting while in Sydney, and I loved the stimulation of the corporate world. My husband and I were on some nonprofit boards as well, and I realized that I had a deep desire to speak for those who are oppressed and cannot speak for themselves. You know…it’s that thing that keeps you up at night…and, for me, it was a desire for social justice for women and girls. This became my calling when we settled in India.
Close to 50% of women in India face abuse in their home. What have you found is the reason behind such a high percentage?

There are underlying social structures that shape and allow this to happen. India is a patriarchal society, and a big portion of the population still [abide by] a dowry system. When a girl gets married – often when she’s still a child - her parents must pay a dowry of money and/or gifts to the groom’s family. In many cases, the family has to sell things or take out loans to pay the dowry. In essence, the dowry system leads to girls being seen as a commodity that is being traded – she is not recognized for her true value.
​[Official statistics say an estimated 31.1% of women in India (i.e. over 200 million women) have experienced domestic violence, but this number is restricted to married women in the 15-49 age group only. The number of unreported cases of domestic violence among women and girls by men who are family members, acquaintances, neighbors, teachers, officials, etc. is staggeringly higher. ~ My Choices Foundation] ​
It is important that our solution to these problems is sustainable and relief-based, while also respecting religious and community sentiments. A cornerstone of our Operation PeaceMaker (OPM) program [the arm of the foundation that addresses domestic abuse] is that it focuses efforts on counseling through mediation that includes the entire family, and our ‘PeaceMakers’ are local women whom the community trusts.

We work with entire villages - when a man is ‘called out’ by the community, he’s less likely to continue the behavior. People from low socioeconomic backgrounds fear the police. So the threat of police intervention carries a lot of weight, and the man soon realizes that he cannot get away with the abuse.

We have five counseling centers* that provide 100% free counseling, rights education, and legal aid to victims of violence and their families. We believe that domestic violence can be stopped by healing and reconciling families in a peaceful manner and will resort to further action [the foundation has strong partnerships with local police] only when such an option is no longer available.
​
The My Choices Foundation has five fully operational counseling centers in the state of Telangana (4 in Hyderabad and 1 in Warangal) – with recent expansions to three other States: West Bengal, Jharkand and Rajasthan.
How are the PeaceMakers trained to provide help to women and families?

There is a three-week training process for our ‘PeaceMakers.’ This training program is led by professional counselors and lawyers who aim to empower the PeaceMakers with the counseling skills, legal knowledge (Domestic Violence Act 2005 and POCSO), infrastructure and processes required to be agents of change in their communities. When the victims find out that the law is on their side, they are more apt to seek help.
We also launched the National Toll-Free Domestic Violence helpline in order to reach as many women as possible.
​
[The foundation’s counseling centers are now open, and all precautions are being taken to keep everyone safe.]​
These girls are taken to underground basements where no one can find them. If the girl is from southern India, she is taken to northern India, where she cannot understand the language because it is completely different. This takes away her ability to ask for help.
​
Only 1% of girls who are taken are rescued. Once they’re gone, they’re just gone. They are raped by up to 40 men a day and usually don’t make it to their 19th birthday.
There is a multifaceted approach to how you are helping in this area. You are educating entire villages. Are you also working with local law enforcement at all to find out which areas are being targeted?

There are eight states (countries within a country, really) and over 600,000 villages in India! So it’s imperative that we identify which villages are most vulnerable. We partnered with Quantium, a data analytics company, to build India’s first mapping tool. Law enforcement was also involved, but our partnerships with local NGOs provided much needed guidance because they knew the people in the villages.

In general, there are four focus areas: rescue, rehabilitation, restoration and prevention. Prevention is the area we are focused on. You don’t need the other three if families are educated about how to protect their daughters.

We talk to the fathers on their terms because we believe in the good in the fathers.* Many of these families are farmers with lots of responsibilities, and they are already completely overwhelmed. So we approach them with this analogy: What do you do to grow a healthy crop? You feed and water the crop until harvest. You need to nurture your daughters in the same way until adulthood.
​
Our Safe Village Programs use skits, videos, in-person interactions and engaging comic books to reach children. We also utilize volunteers from villages (Rakshaks) – those who know how to spot girls who aren’t going to school…girls who are most vulnerable. They contact us so we know where to focus our attention.
For an even broader reach, we’ve developed online programs with training modules on various topics.

*The ‘Good Father’ campaign was born from the results found during an 18-month research project that studied why the traffickers were able to convince fathers to let their daughters go as well as the mindset of the traffickers themselves.
Shakti Graduation: Empowering Young Girls
(Photo Courtesy: My Choices Foundation)
Is this gender-based abuse and violence more of a cultural problem or a financial problem in India?

It’s more of a cultural problem - the general notion that girls are a burden on the family. The dowry system and other accepted practices, such as girls being married off at a young age, all play a role.

I’m Christian, and my faith keeps me going. I start my day with prayer, and I fall to my knees at night to do the same. I’ve also learned along the way that my grieving for these women is not a weakness; it is a part of a journey toward healing.

Elca becomes emotional…
​
When I see the gratitude in these women’s eyes…when they say, ‘No one has asked me this before or wanted to help in this way’…well…this is what keeps me going.