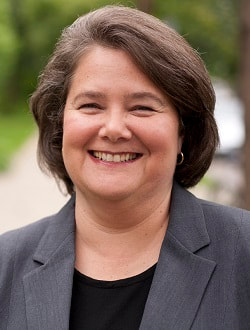 Deborah De Santis is President and Chief Executive Officer of the Corporation for Supportive Housing (CSH), the largest Community Development Financial Institution in the United States devoted to housing solutions for those at risk of homelessness. Deborah has led CSH since 2007, tripling its lending and support toward the creation of more than 300,000 permanent, stable homes for individuals and families struggling through multiple challenges, including the trauma of homelessness, lack of healthcare, and intergenerational poverty.

Deborah has spearheaded the reorganization of CSH to deepen its focus on data-driven results, innovative funding models such as Pay-For-Success, and expansion into high-need communities. Prior to her position at CSH, she served as Executive Director of the New Jersey Housing and Mortgage Finance Agency and as Deputy Chief of Staff to the Governor of New Jersey. In 2019, Deborah was recognized as one of the top 10 leading women in the affordable housing industry by Affordable Housing Finance magazine and has been cited as one of the 10 Most Influential Americans for Homelessness Reform.

Deborah serves on the Board of Trustees for Babson College in Wellesley, Massachusetts where she is a recipient of the Babson College Distinguished Alumni Entrepreneur Award as well as the Richard J. Snyder Distinguished Service to the College Award for 2020. She resides in Metuchen, New Jersey with her partner, Elizabeth Murray, and their children Anuar and Ari.

​About Corporation for Supportive Housing (CSH):

The mission of the Corporation for Supportive Housing is to advance solutions that use housing as a platform for services to improve the lives of the most vulnerable people, maximize public resources, and build healthy communities.
Carol Lippert Gray, co-associate editor, contacted Deborah to learn more about her journey with CSH.

What is your background?

It’s a bit of politics, a bit of government experience. I started by running political campaigns, then worked for New Jersey Governor Christine Todd Whitman. I went into her administration and served in a number of positions. Through those, I developed an interest in affordable housing that grew into a deeper interest in all things housing.

I ran the New Jersey Housing and Mortgage Finance Agency for several years. During that time, I became interested in special-needs housing, and I came into contact with the Corporation for Supportive Housing. I worked with them to expand their programs in New Jersey. I loved the population, loved doing housing financing. But I realized I didn’t want to be a developer. There was an opening at CSH, and I’ve been with the organization for 18 years now, both as director of New Jersey programming, and as president and CEO since 2007.
​When was the organization founded?

It was founded in 1991 by Julie Sandorf. She had been working with another community development financial institution. She recognized policy failures that transferred folks out of psychiatric hospitals. Those policies resulted in tremendous street homelessness throughout the country. She saw work being done by advocates in New York City and said, ‘Let's get you into housing; let's engage you into services that can get you into housing.’ Julie realized an organization that could bring capital to different communities to create supportive housing. She worked with big foundations to seed CSH.

What is the organization’s reach?

We reach about 48 states, the Virgin Islands, and Puerto Rico. It’s hard to use number of people served as a metric; we use housing units as a metric. Annually, we track about 30,000 direct investments in capacity building and technical assistance, building knowledge and skills.
​What about CSH particularly resonates with you?

When I was in that government job, what struck me was that CSH had the ability to make a moral argument and a business case as well [for the value of supportive housing]. It demonstrated to elected officials that it’s less costly to create housing with services than for people to be cycling through emergency housing, jail, and the streets. There are better outcomes if we can get people off the streets and connect them to services.

Why is what you do important?

The status quo doesn’t work, so we demonstrated that there is an alternative, viable solution that allows individuals and families to thrive in communities rather than in institutional settings. We build skills to help people understand how you link housing and services to create better outcomes for folks.

Supportive housing is affordable housing with services that comes with a lease. It’s not a group home. The lease is not contingent upon the person using the services. They have access to tenants’ rights and case managers and services.

Will there always be a need for what you do?

Sadly, there will be. We would love to imagine a time when there isn’t a need. We were created because systems weren’t addressing the need to collaborate with one another. This created gaps where people couldn’t access services. People with a history of alcohol abuse or incarceration were rotating in and out of emergency rooms multiple times. Those [established] systems never saw how to fill those gaps in and among different systems.

​​What do you see as CSH’s most significant achievement?
​​There’s a lack of staffing in the government causing hurdles with systems to get folks into housing. Without the right level of services, they’ll fail at housing. Folks with the most acute needs lack housing, but I want to sound the alarm around the lack of service funding. That’s a government function.

What do you see as YOUR most significant achievement?

I meet with every new employee. I get to know them; they get to know me. I help to make connections for them within the organization. We’re fortunate in that we continue to recruit talented and motivated individuals. We’ve doubled our staff since I became CEO. We’ve grown our geographic footprint. We’ve expanded our systems, working with a wide array of experience and knowledge. It’s exciting to see.

I’m very bad at finding sanctuary. One of our recent team meetings focused on wellness and extended a 30-day challenge. I’m trying to work on it. But I do find sanctuary in my garden. Even if I'm just weeding, it gives me quiet time, and that’s when I often get new ideas.
CSH Website
CSH - SPEAK UP!
​Follow CSH on:
FACEBOOK
INSTAGRAM