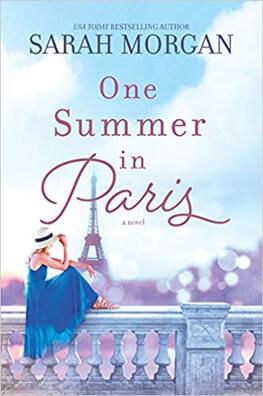 He rubbed his fingers over his forehead, as if he was trying to massage away the pain. She knew every one of his gestures. This one meant he was dealing with a situation for which there was no fix.

Or what? The only thing she needed was sitting in front of her.

“I’m fine.” She still didn’t really know why he was here and then she saw him draw breath and knew she was about to find out.

He studied something on the kitchen counter. “Have you cancelled the trip to Paris?”

“No.” Cancelling would be the final acknowledgment that her marriage was over. Also, the moment she did it she knew Sophie would also cancel her own trip. She was still figuring out how to handle that.

Good? Her heart skipped in her chest.

Had he changed his mind? That was why he’d come here tonight, to find a way to ask her forgiveness.

This was the first step towards reconciliation.

Would she be able to forgive him?

Yes, she probably would. They’d need to move away, of course. Leave this town and move to a place where no one knew them. They’d see a counsellor. Find their way through this knotty mess. Rebuild their lives.

“You don’t want me to cancel?”

“I’ll pay you for the tickets. I don’t want you to lose the money. And I’ll take over the hotel reservation.”

Grace felt as if her brain was working in slow motion. He didn’t want to take her to Paris. He was offering her guilt money.

And suddenly she knew. God, she was so slow.

He ran his hand over the back of his neck. “Grace -”

“You want the tickets so you can take the girl” - she emphasized ‘girl’ - “you’re having an affair with, on our anniversary trip.”

He looked almost as sick as she felt.

“I know it’s not the most tactful thing to ask you.” He looked desperately uncomfortable.

“But it does make financial sense. You already booked the whole trip, and I know you’ll lose money when you cancel.”

She could imagine how the discussion might have gone with Lissa.

He would have fought it, she was sure of that.

I can’t expect my wife to give me the tickets she booked to celebrate our anniversary so that I can take my lover.

Maybe Lissa had been testing him, checking how far he’d go for her.

A part of Grace wanted to know the answer to that, too.

He was a man at war on the inside. Good versus bad. David, the good guy, trying to slide into the skin of bad guy and finding it didn’t fit comfortably.

“What have you turned into, David? What’s happened to the man I married?” She stood up quickly, frightened that her emotions would tumble onto the table between them. “Go. You said five minutes, and you’ve had your five minutes.”

His fingers curled and uncurled. “I know it’s been stressful for you, but it’s also been stressful for Lissa.” He slid her a look. Wild. A little desperate. “Some of the people in town don’t even speak to her any more. She’s finding it upsetting. She’s young, Grace. She’s struggling to handle all this.”

“I’ve lost a lot too. I’ve lost my house, my standing in the community and also my close relationship with my daughter.”

“She isn’t a pair of socks you’ve abandoned under the bed. You haven’t lost her. You chose something different.” Even as she said the words she was wondering what about me. Why wasn’t she on that list? Hadn’t she ever been important to him?

She looked at his face and saw that he looked haggard. If anything he looked worse than she did. Maybe having a girlfriend half his age was proving harder work than he’d imagined.

“You need to leave now.” Before she picked up a skillet and clonked him over the head with it. That would give him the best headline he’d ever had in his time as editor. Shame he wouldn’t be alive to read it.

“I won’t lose money, because I’m not cancelling.”

It was difficult to know which of them was most surprised.

David couldn’t have looked more dazed if she’d followed through on her fantasy and clocked him over the head with a skillet. “You’re surely not planning on going?”

“Yes, I’m going. I’ve been looking forward to it for ages. Why would I cancel?”

“Because -” he seemed lost for words, even though words were his job. “You don’t – you
never – . You travel with me. I’m the one who takes care of the passports and -”

“I can carry my own passport, David. And yes, in the past we’ve travelled together but you now have a new travelling companion, so I’ll travel alone. If Lissa needs a trip to Europe, you can arrange your own.”

“Maybe we don’t know each other as well as we thought.”